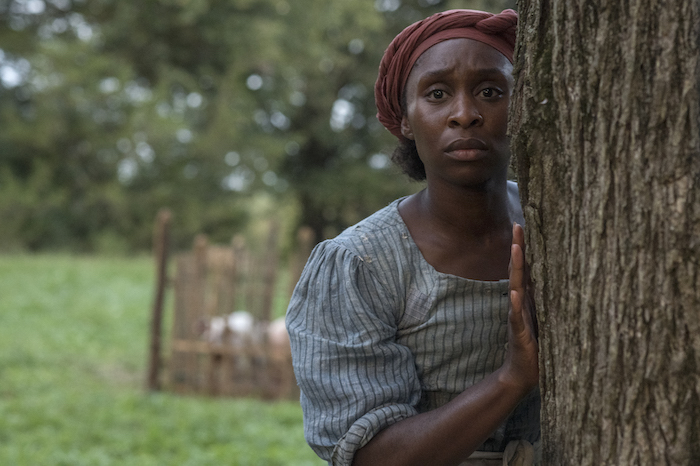 Movies influence both what parts of history are remembered—just think of how Hidden Figures inserted Katherine Johnson into public memory practically overnight—and how they are remembered. While history is a core subject in the standard American education, the simple fact of the matter is that Hollywood probably has just as much, if not more, influence over the general public’s sense of history than any K-12 curriculum.

The history of American slavery has piqued the interest of more than a few filmmakers over the years, and the resulting films have ranged from major sources of misinformation (Gone with the Wind) to thorough efforts to bring more accurate and responsible depictions to the screen (12 Years a Slave). But from the most offensively bad to respectfully accurate, American slavery as seen in the movies has been overwhelmingly male-dominated. Even Lupita Nyong’o’s Oscar-winning performance as Patsey in 12 Years a Slave was ultimately a supporting role.

Harriet isn’t just the first major studio biopic of Harriet Tubman, but of any enslaved woman. The film takes its commitment to prioritizing the female perspective on its subject matter a commendable step further than just putting the spotlight on Tubman. The end credits give special thanks to historian Thavolia Glymph, whose research on the role of women in American slavery, from the unique trials faced by enslaved black women to the role of white women as slavers and abusers, challenges many long-held conventional beliefs, and her influence on the film clearly shows. In its focus on the emotional traumas of slavery in particular, Harriet goes places that no other film has before—places that were previously glaring omissions in cinematic depictions of slavery, and for filling these significant gaps alone Harriet deserves praise. But while the film’s commentary on slavery is an important break with movie traditions, its actual narrative structure is unfortunately far more familiar.

Biopics, on the whole, tend to have a preoccupation with taking an “educational” approach that ultimately comes at the cost of narrative interest. In seeking to educate, or at the very least, appear vaguely educational, they try to tell a historical figure’s whole story, encyclopedia entry style. So-and-so was born in this year in this place, and they were raised here, and then they did this, and then they did that, and then they did another thing, and eventually they died at insert-age-here of whatever the cause may be. Filmmakers may try to jazz things up with flashbacks or other such tricks, but when this approach is taken there’s only so much damage control that can be done as far as dynamism is concerned, and Harriet is sadly not among the few exceptions to this trend.

That said, the scenes where Harriet drags most noticeably are, ironically enough, scenes that feel like they were thrown in for “commercial appeal,” only driven by hugely outdated notions of what audiences actually find appealing. Romantic subplots are inflated to several times their necessary size and flowery motivational speeches consistently go on just a little bit too long, but perhaps the biggest issue of all is the film’s attempt to stick with conventions in terms of its antagonist. On one hand, the film does a decent job of emphasizing Tubman’s commitment to battling slavery as an institution. But on the other, convention says movies are supposed to have bad guys, so Harriet forces a Villain-with-a-capital-V into the mix via Gideon Brodess (Joe Alwyn), Tubman’s former slave owner obsessed with catching her. The film makes his quest into a major narrative arc, but no matter how much screen time they give him, it only feels more and more like an unnecessary subplot as the story unfolds.

In terms of performances, Harriet features a commendably strong cast overall, though Cynthia Erivo is easily the star of the film in every sense of the word. She’s a force to be reckoned with as Harriet Tubman. While theater aficionados are already familiar with Erivo’s incredible talents, this is the first time the actress has been front and center in a feature film and her star power is undeniable. Tubman is the sort of larger-than-life figure that requires serious skill to pull off, and Erivo absolutely owns every scene.

The only arguable detractor on the acting side of things is Joe Alwyn as Brodess. Best known for playing the forgettable boyfriend in The Favourite and Mary Queen of Scotts, and being Taylor Swift’s forgettable boyfriend in real life, Alywn demonstrates in Harriet that he is equally skilled at being forgettable even when he’s not supposed to be. Though admittedly it doesn’t help that his role, as mentioned earlier, feels majorly forced and largely unnecessary.

All things considered, Harriet is a solidly decent movie. It’s well researched, well crafted, well-acted, and ultimately well worth your time. But its overall adherence to tired old biopic conventions ultimately keeps it from being truly great, and that’s a damn shame.