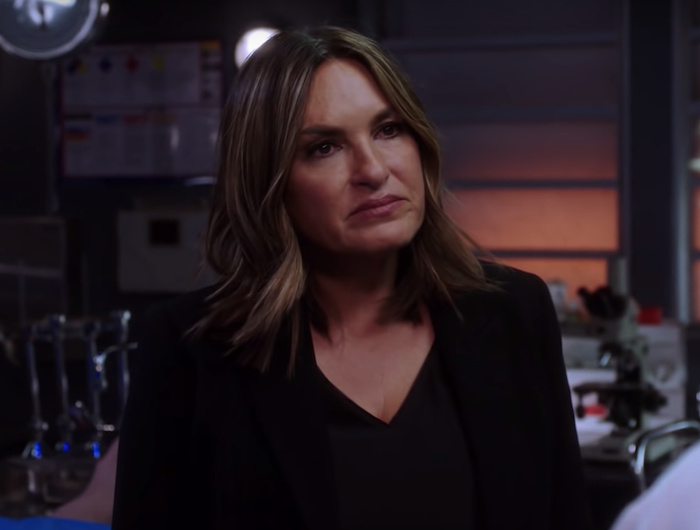 I am not loving this season of SVU so far. I don’t understand why the cold open is relying so heavily on personal lives and musical cues instead of the classic bait and switch of yesteryear. You know, when a couple is arguing and you think one of them is about to become a victim, then a dog runs from around the corner holding a severed human foot and then Ice T shows up and says a quip and then, bam! Opening credits.

I miss those SVU days.

Anyway, the cold open is Noah Benson meeting Olivia’s half-brother Simon (barf, did he have to come back?!) and also, a teenager was raped. Super cool to have the juxtaposition between those two. I care as much about Noah Benson as I did Kathleen Stabler, which is to say, not at all. Like, at all. The only SVU-adjacent family member I do enjoy seeing pop up is Ken Randall, Fin’s son. This was not a Ken episode.

In fact, this was barely an SVU episode because we’re all about the squad’s personal lives again. Look. I love me some Benson but I love me some Benson when she’s running after perps and putting their ass in jail. I do not love me some Benson when she’s dealing with Noah (who I really don’t love) or her stupid brother, who they unceremoniously killed off in this episode for reasons that aren’t totally clear to me, other than to make Benson sad. Putting Benson through the ringer for the sake of “drama” is f*cking dumb. Putting Benson through the ringer because the guy who keeps cutting off people’s feet is going to get away with it unless she poses as a foot model to lure him out is why I watch SVU.

Anyway, this may be the status quo for the season which is a bummer. Never would have happened under Neal Baer’s watch, all I can say. That man gave us a monkey in a basketball as well as the crime scene tech turning out to be a damn serial killer. Not to mention the Hillary Duff as Casey Anthony ep that ended up being an anti-vaxxer thing. We didn’t know how good we had it, friends.

So this episode is about Benson and her personal life, but also, a teenager was raped, only twist. It turns out she was raped by someone whose DNA is in the system for a double-homicide years ago—only super twist, the guy in jail for the homicide is the son/brother of the victims and guess what? His DNA doesn’t match the DNA at the murder scene. Double guess what? He’s played by the guy (Guillermo Díaz) who was in Scandal, but more importantly, he was also in Party Girl almost 25 years ago. I will never forget this scene and think of it every time he pops up in a show or movie:

Anyway, he’s in jail for murder and the guy that they said was his accomplice also went to jail. Long story short, he confessed because he and the accomplice were having a sexual experience at the time, and rather than come out as gay, he decided to confess because he thought his goose was cooked anyway, so if he covered up his homosexuality, it would make prison life easier for him.

This all comes out through a series of events that inexplicably involve Wentworth Miller, who is looking pretty good if I do say so myself. You’ll recall that during the Stabler years he played a renegade detective who didn’t play by the rules but this character appears to be completely different and I think is a Queens ADA. More importantly he pulled my absolute favorite Law and Order-universe move, which is to ask a character, apropos of basically nothing, “Is this because I’m gay?” which you’ll recall ADA Serena Southerlyn used to complete and utter WTF-ery years ago, when she left the show. This is how you should reference a character’s personal life in the L&O world—completely void of context and out of the blue.

The real murderer/rapist is a big, scary-looking dude who gets popped dead to rights due to a victim ID because we don’t have time for a trial since we simply must get back to Benson and her personal life. Oh, the guy convicted for his mom and sister’s murder is let out of prison. His “accomplice” died about a week before this all kicked off, so that’s a bittersweet ending for you. Let’s get back to Benson’s personal life, though…ugh.

Like I said, her brother pops up out of nowhere and is killed off from an OD, and I definitely rolled my eyes at the whole thing but I stopped when ME Warner showed up! Hey, Tamara Tunie, nice to see you again! Please come back, and while you’re at it, bring George Huang with you, yeah?

Benson feels guilt that she told her brother not to bother contacting her again via voice mail when he flaked on meeting up with her and her kid—and it’s implied that he turned to drugs after getting that message. OK.

The ep ends with Fin and Carisi (who is definitely still around but didn’t really do anything memorable this episode but also, I’m kind of finding it hot that he’s an ADA now. Am I alone, here?) taking the newly freed guy to visit his mom and sister’s graves.

Another case done and dusted in the SVU world.

I never thought I’d say this but can we get back to the ripped-from-the-headlines stuff in SVU? These new cases aren’t doing it for me because, like I said, they’re not about a dude who gets off on cutting people’s feet off because he’s searching for the perfect foot model due to the fact his mom humiliated him in his second grade talent show. They’re about Benson and the crew, which is less interesting to me.

Here’s hoping next week’s ep is better and perhaps more importantly that Wentworth Miller shows up again because you know what? It’s nice to see him.