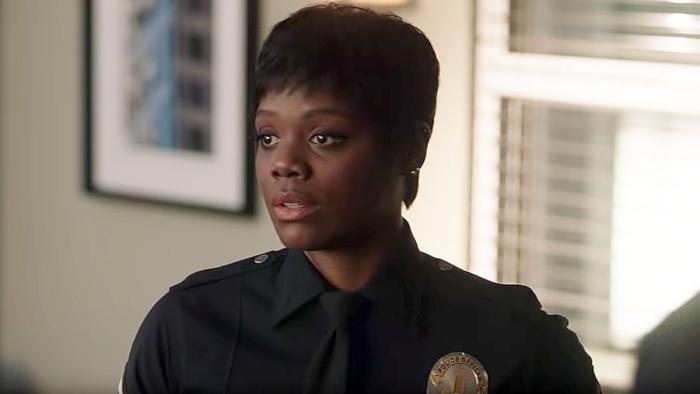 Here's How They Wrote Afton Williamson Out of ABC's 'The Rookie'

For a network cop procedural, ABC’s The Rookie turned in a surprisingly solid first season, anchored by Nathan Fillion and a strong ensemble, including Afton Williamson’s Talia Bishop, the character Fillion’s character was partnered with on the series. Unfortunately, at the end of the first season of the series, Afton Williamson left after alleging that she had been repeatedly sexually harassed by an actor who recurs on the series, Demetrius Grosse. Despite her complaints, Williamson was still asked to share scenes with him in the season, including in the season finale. Williamson also accused a member of the hair department of racial discrimination, “racially charged inappropriate comments,” and bullying that escalated to sexual assault.

After showrunner Alexi Hawley (brother of Fargo’s Noah) did not make any changes in response to Williamson’s complaint, Williamson walked. An investigation was subsequently conducted by an outside firm, which determined that the accused parties “did not conduct themselves in an unlawful manner or demonstrate behavior inappropriate for the workplace” and that Alexi Hawley and the network executives “addressed matters of which they were made aware promptly and in a fair and reasonable manner.”

Williamson disagreed with the firm’s findings, writing on Instagram after the investigation concluded:

What saddens me the most is that the lengths that were taken to Deceive, Lie, and Cover Up the Truth, were far greater than those made to Protect and Maintain a Safe Working Environment for Employees. It’s Heartbreaking for everyone on that set; Past and Present. And for every Actor out there who Stands in the Face Of Harassment and Discrimination, Assault and Injustice.

Afton Williamson was great on the series, and I liked her character a lot. She was the perfect complement to Fillion’s rookie-character. I also thought it was odd, in retrospect, that even before any of this news broke, her character had been written a potentially career-ending scandal in the season finale. In fact, I expected that scandal would be how she was written off the series.

Unfortunately, that would have required highlighting her absence more than they did in the second season premiere, which gave the exit of Williamson’s character short shrift. Not only did the episode resolve last season’s cliffhanger in literally the first three minutes of the episode before moving on to a completely different case, the series quickly disposed of Williamson’s character, as well.

John Nolan (Fillion) to his girlfriend, Jessica Russo (played by Sarah Shahi): “It’s not going to be the same without Talia.”

Jessica: “Taking that job over at the ATF was a smart move. She was never going to have the career she wanted at the LAPD, not after she lied about her brother.”

John: “Yeah. At least she waited until after I took the exam.”

And that’s it. After 20 episodes, Afton Williamson was written out of the series in four sentences. Meanwhile, John Nolan’s new ride-along partner is Sergeant Wade Grey (Richard T. Jones), at least for the time being. A new character is expected to be introduced into the series in episode four.

What saddens me the most is that the lengths that were taken to Deceive, Lie, and Cover Up the Truth, were far greater than those made to Protect and Maintain a Safe Working Environment for Employees. It’s Heartbreaking for everyone on that set; Past and Present. And for every Actor out there who Stands in the Face Of Harassment and Discrimination, Assault and Injustice. As a Black Woman, an Artist, an Actor, in 2019. My Speaking the Truth, Standing up for myself, and Leaving an Unsafe Work Environment, Changed things for a lot of people: Black Women, Artists, Actors, Victims, and Survivors of Injustice and Discrimination; Gave Hope and a Promise that things Will Change; that things ARE CHANGING. And that is Not in Vain. My prayer is that we get to a point in this Industry where we don’t just Talk about it in 2 hour Mandatory Meetings. But we adhere to Keeping the Promises Made to Everyone on every set, Tirelessly Fulfilling their Dreams with Passion and Dedication. In order to Be the Change, I want to see, I will Continue to Work so that Casts & Crews alike finally See Words Align With Action. We’ve got to Do Better as an Industry. It’s just Talk until you actually Do Something. ❤️

← Sony and Marvel's Spider-Man Deal is Proof That Disney Will Always Win | '9-1-1' Recap: Does Christopher Die During The Tsunami? →