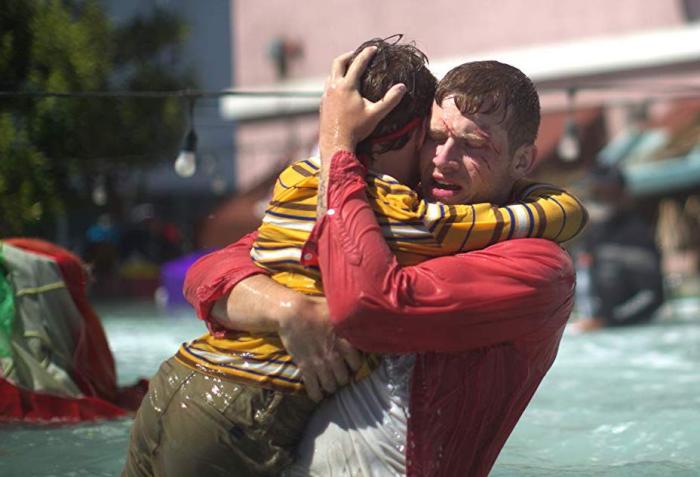 One of the things I find fascinating about 9-1-1 is its constant struggle for balance. It has characters it wants you to be emotionally invested in, and it has crazy emergencies, and sometimes they come together beautifully (Chim, with the rebar in his skull), but most of the time they’re just separate plates spinning in the air. Which brings me to the fallout of that tsunami that just crashed into Santa Monica… where Buck and Christopher were enjoying a heartwarming day at the amusement park.

As predicted, Buck rescues Eddie’s son from the crashing water and finds him a piece of high ground (the top of a firetruck, natch!), then goes about saving other people he finds floating by — and distracting Christopher when the people floating by aren’t exactly alive. Mostly this was all just an excuse for Buck to realize he doesn’t need to be “on the job” to be a hero. It turns out that the cure for his funk was a massive natural disaster threatening his plucky young friend!

So, everything’s cool, right? They’re safe now? HAHA OF COURSE NOT. The thing about tsunamis is that all the water crashes to land, and then it recedes — and that receding rush of water caught Buck by surprise. While he’s desperately trying to pull more people to safety, CHRISTOPHER FALLS OFF THE DAMN FIRETRUCK AND IS SWEPT AWAY. Annnnd that’s our cliffhanger.

For two seasons 9-1-1 has relied on putting the delightful Chim in harm’s way to keep us on the edge of our seats, and honestly I thought that was going to be one of the show’s calling cards, just like demolishing parts of Los Angeles with a variety of natural disasters seems to be. These are just the boxes that’ll be ticked each season. So while I’m thankful that for once Chim is healthy and safe, REALLY 9-1-1? You’re gonna replace “Chim Might Be Dead!” with “Christopher Might Be Dead!”? I didn’t ask for that, show. And I don’t like it. You leave that beautiful boy ALONE.

We’ll have to wait until next week to see how this all shakes out, but the promos aren’t promising. At the very least, it looks like the question of Christopher’s survival will be hanging over Buck’s head for a while. The good news is that Chim has always pulled through whatever danger this show has thrown at him, and I can’t believe it’ll be any different for Christopher. That’s what I’m holding onto right now.

While Buck’s plot thread was the emotionally impactful one, it was light on the crazy (because on this show, turning streets into raging rivers is practically sedate). Instead, our other first responders had to pick up the slack with a couple of delightfully bonkers scenarios:

— Athena was off-duty, enjoying some bonding time with her daughter May, who is stressing out over her college applications. Specifically: Has she faced any meaningful challenges in her life that would make for a compelling college essay? And speaking of challenges — Athena’s car gets caught in a nasty multi-car pile up! They both make it out OK, but others weren’t so lucky — and with that tsunami hammering the other side of town, help isn’t on its way. But really, who needs help when you’ve got Athena? These people are LUCKY. She tasks May with helping a woman whose neck was injured in the crash, while she focuses on keeping the other survivors calm. But the danger isn’t over, because the crash brought down a live power transformer. To make matters worse, the sewers are overflowing from the tsunami, meaning that transformer is now in a large pool of water. It’s fine though, because the dude who has been giving Athena a hard time steps right into the water and gets electrocuted (I know, I know, this is a show about saving people, but seriously, screw that dude).

May does her momma proud and keeps the injured woman awake long enough for help to come, then breaks into tears once the crisis is averted. “I’m not you, Mom!” she tells Athena, to which Athena replies, “Well, I wasn’t always me either. Took me a minute to get here.” And they hug and now I want Athena to save me AND be my mother. Honestly, sometimes I think 9-1-1 could turn into a one-woman Angela Bassett show and still be just as believable.

— Bobby, Hen, Chim, and Eddie are focused on rescuing survivors of the tsunami and come across a boat that has been swept up into a street. It’s actually a boat we saw at the beginning of the episode: A woman is getting married at sea, and her son seems to butt heads with her new husband. So naturally, Son and Hubby get, uh, SKEWERED TOGETHER BY A RADIO ANTENNA. Worse, that antenna has pinned them to the hull, which is taking on water. The son, who was punctured through the shoulder, is quickly cut free, but Hubby is another issue. The antenna went through his spleen, so he’s rapidly bleeding out, and to free him Bobby needs to swim underneath to boat to saw the antenna. While he works, the man loses consciousness, and Hen instructs Eddie on how to perform CPR underwater because they can’t perform chest compressions while he’s floating.

You know what? I’d take a one-woman Hen Saves Everyone version of this show as well.

By the end of the episode, Bobby and Eddie have taken their little motorboat out toward the amusement park, ground zero of the carnage. It’s there that they discover the survivors stranded on the Ferris wheel, which is half submerged. But they aren’t the only responders on-hand: Ronda Rousey’s new character, a responder from a different fire station, was already on the scene when the tsunami hit, and she’s stuck on the Ferris wheel helping people as well. Next week they’ll have to work together and either become fast friends or mortal enemies!

Will Rousey fight Krause next week? That’s the REAL cliffhanger!