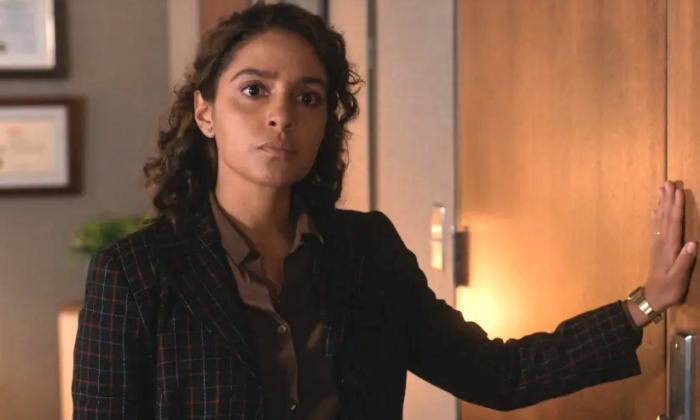 While I enjoy gently teasing For All Mankind of maintaining a singular storyline over close to three decades and attempting to convince us that Joel Kinnaman and Shantal VanSanten look like they’re in their 60s, the long-term storytelling does pay off in a big way in “Bring It Down.” In this episode, we watch the cumulative effects of years of choices crash down around several characters in drastically different ways.

Spoilers for Season 3, Episode 7 of For All Mankind.

The connecting theme that struck me most about this episode was watching characters finding out that something they loved did not love them back. Or perhaps, couldn’t love them back.

The Wilson family is wrangling with this as Larry is asked under oath about having an affair with a White House staffer, which he absolutely is. The discussion of how to handle the situation leads to a starkly honest conversation between Larry and Ellen where Larry openly admits that he’s been questioning if their choices in service of a personally disappointing but professionally successful life were worth it, and tipping off Ellen that Pam’s reasons for leaving had more to do with Ellen’s career than Pam’s own feelings. Ellen, after years of rock-steady dedication to the lie that has brought her to the highest office in the US, immediately organizes a sudden visit to see Pam. Apparently, as ambitious and driven as Ellen was, she did not love her career the way Larry assumed she did.

Perhaps the most devastating conflict on a personal level is the one between Margo and Aleida because the person Margo loves DOES love her back. Ultimately it does not matter. Margo loved Sergei enough to betray NASA and Aleida, and she could not save him. He will go back to almost certain death in Moscow to ensure his family’s safety, and Margo will lose him for good. Meanwhile, in the futile service of saving Sergei, Margo betrayed Aleida. Now Aleida is now struggling with the fact that she put NASA ahead of her personal life only to learn that the work she sacrificed for was handed over to the USSR by someone at the agency. That betrayal is consuming her, and it’s unclear if Aleida’s dogged pursuit of answers will end her career, or Margo’s, but the fallout between the two women themselves will be heart-breaking.

Of course, the domino effect of Margo’s decision continues in the events on Mars. Without the plans Margo handed over, the Soviets wouldn’t have launched a mission on the same schedule as NASA and Helios. Leaving aside the rescue mission the Sojourner crew undertook, this also means that there wouldn’t have been an agreement between Helios and Roscosomos to drill for water on Mars. This leads us to the next conflict, that between Ed Baldwin and Danny Stevens.

Danny thinks that he loves Karen and that all his problems stem from that. Given the glimpses we get of Jimmy in this episode, it seems more likely that both Stevens brothers are still (poorly) dealing with the deaths of their parents in their own ways. For Danny, this means getting high all the time and blaming his problems on the Baldwins, surrogate parents with the added psycho-sexual drama that comes from his brief tryst with Karen. For Jimmy, he’s moved his blame to NASA and started buying into conspiracy theories to explain how his parents were victims of the organization rather than having to deal with the idea that his parents willingly put themselves in mortal danger knowing they’d be leaving their sons alone. We’ll have to wait for Jimmy’s anger at NASA to play out, but Danny’s inability to stay sober has already had fatal ramifications for the Helios/Roscosmos crew. Will Danny Steven become a modern Oedipus? Having sex with his surrogate mother and killing his surrogate father? Ed is still holding on, but he had a penetrating wound to his stomach and was locked in a Hab without a Med Bay and with Danny, who will likely start to go into withdrawal if they’re stuck for an extended period of time. The situation looks grim going into the last three episodes of the season.

← John Oliver Blames Everyone For Inflation | 'Trying' on Apple TV+ Is One of Television's Great, Undiscovered Gems →