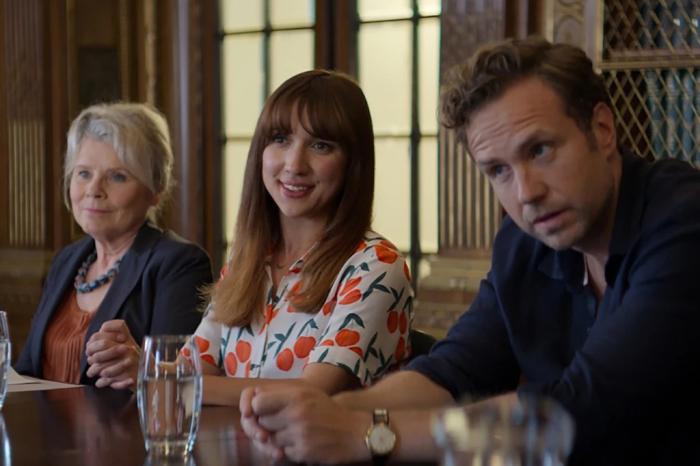 'Trying' on Apple TV+ Is One of TV's Great, Undiscovered Gems

Do you know how when you look at a pair of shoes too long on an Instagram ad and suddenly that pair of shoes starts following you on the Internet because of cookies, advertising, and algorithms? The same thing happens with content. One time I clicked on a stupid headline that said something like, “You HAVE to see the bikini Kaley Cuoco is wearing to the beach” because my fingers are dumb, and I swear to God, paparazzi photos of Kaley Cuoco started trailing me everywhere I visited. I’m not even interested in Kaley Cuoco!. If I check Google news, it’s a wall of content about the shows that I watch. We wrote about Elon Musk a few times, and now I’m apprised of his every waking moment. Just this last week, I’ve seen him shirtless and learned that he broke up the marriage between his friend and Google co-founder Sergey Brin by allegedly sleeping with his wife.

I mention this because Trying on Apple TV+ might be a show you’ve never heard of. Maybe it’s a show you’d never give a second thought to — I only started streaming it myself because I’d completely run out of other things to watch, and I chose this over Bosch because the episode runtimes were shorter. However, now that you’ve clicked on this review, you may be confronted by other articles about Trying. They may float to the top of your feeds so often that you finally cave and give it a shot because the algorithm thinks you’ll like a show that some asshole on a site called Pajiba asked you to click on.

I hope you sample it because many of you — most — will probably find it as funny, warm-hearted, witty and as lovely as I do. Many of our American readers may know Rafe Spall from movies like Hot Fuzz,and he’s suitably charming and funny in Trying. But here’s my guarantee: You will have a raging crush on the female lead, Esther Smith, that will sneak up on you by the end of the first season and completely overwhelm you by the end of the second.

Trying is about a couple, Jason and Nikki (Spall and Smith, respectively) trying to adopt a child after IVF treatment failed. This may not sound like a particularly interesting premise for anyone who has not gone through the adoption process — it didn’t sound compelling to me — but adoption is merely the peg upon which the comedy is built. It’s really about relationships, and how they survive overwhelming and stressful periods, and about parenting, or rather: What kind of parents this couple wants to be. The series is relatable to any couple going through an anxious period, whether it be having a baby, buying a house, seeking a promotion, enduring a health scare, or dealing with the drama of other family members. In other words: Every couple.

Mostly, it’s an often very funny and heartwarming comedy about two spectacular people navigating their relationship and interacting with the friends and family that make up their eclectic circle. Spall and Smith are fantastic, but the series is also populated with terrific side characters, including their best friend couple, Erica (Ophelia Lovibond, now the lead in HBO Max’s Minx) and her cad of a husband, Freddy (Oliver Chris); Nikki’s sister, Karen (Sian Brooke), who is involved with a very Stephen Merchant-like character (Darren Boyd, who coincidentally stars in Merchant’s latest series); their eccentric parents, and the legendary Imelda Staunton, who plays their adoption administrator.

The comedic sensibilty of it reminds me of HBO Max’s Starstruck crossed with a British Jason Katims, which is to say: The sentimentality is less overt than, say, Parenthood, but no less affecting. It has the same appeal as Schitt’s Creek or Ted Lasso; it is kind without losing any of its comedic bite. The under-the-radar series kicked off its third season over the weekend, which suggests that either Trying has fared well enough in the UK to sustain the BBC’s participation, or Apple TV+ has faith that viewers in America will eventually come around to it. I sincerely hope they do because it’s genuinely one of television’s great undiscovered gems.

The first two seasons of Trying are available on Apple TV+, in addition to the first two episodes of the third season, which began this week.

← 'For All Mankind' Is Propelled This Season By Unrequited Love | Fantasia Review: 'Polaris' Is One of the Most Unique Canadian Films Ever Made →