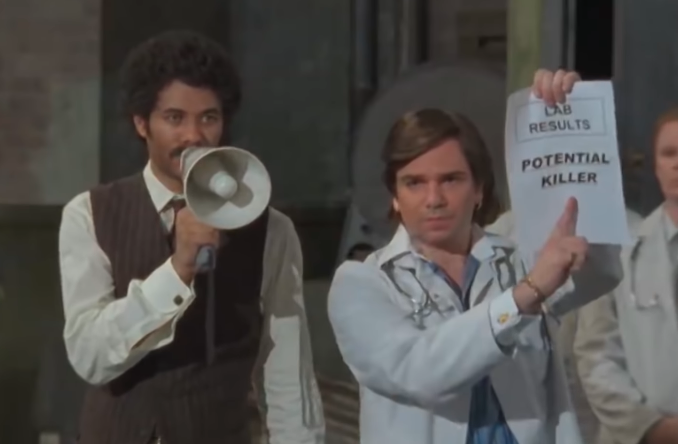 This weekend Twitter was a hotbed of entertainment news, with Ted Lasso premiere reactions, Tokyo Olympics babble, and exciting trailers coming out of Comic-Con. There was a whole lot going on, so it came as somewhat of a surprise when an unlikely contender for Hottest Bit O’News started getting retweeted all over my feed yesterday:

Yup, that’s right: A 17-year-old niche British comedy is finally available to stream in the United States, and I saw more people talking about that than the new season of Doctor Who. As someone who DEFINITELY DOES NOT HAVE A RIPPED DVD COPY OF GARTH MARENGHI’S DARKPLACE THAT MY FRIEND BURNED AFTER PIRATING THE SHOW SOMETIME IN THE LATE AUGHTS, WHY DO YOU ASK, ahem, I can confirm that yes — this streaming debut is a very big deal. The show has aired in the U.S. before, years ago late at night on Syfy and Adult Swim, I think, but since then it has gone on to achieve an almost mythical status amongst anglophiles and comedy nerds. It’s the ultimate “if you know, you know” show. Part of its charm is its bizarre concept, a nearly impossible-to-explain Jenga tower built out of metafictional absurdity. And the rest of its charm comes from its cast, which includes What We Do In The Shadows’s Matt Berry going full-on Jackie Daytona.

Let’s start with the premise: Garth Marenghi (played by Matthew Holness) is a successful (?) horror novelist who helmed a television show in the 1980s — a vanity project he wrote, directed, and starred in about the supernatural goings-on at a hospital. Or, as Marenghi describes it: “A television program so radical, so risky, so dangerous, so goddamned crazy that the so-called powers-that-be became too scared to show it.” [It was terrible.] Years later those same powers-that-be, apparently facing a programming shortage so dire that they figured airing something terrible was better than airing static, came back to Marenghi and asked for his lost classic. Only he did them one better. He spent three hours of his oh-so-valuable time filming interviews with the cast, reflecting on this landmark show that nobody has ever laid eyes on before, and packaged that commentary alongside the episodes — effectively turning what was already a vanity project into a clueless small-screen circle jerk.

So it’s a show within a documentary within a show, with comedians playing actors playing characters in possibly the worst thing ever filmed — except even as we are witnessing all that badness, they’re explaining its greatness. “It’s so bad it’s good” ain’t the thing, here. That would be too easy. “It’s so good because it takes unbelievable levels of talent to create something so holistically, intentionally abysmal” is more like it. That talent comes from Matthew Holness and Richard Ayoade, who co-wrote the series together (Ayoade also directed all the episodes and stars as Marenghi’s publisher, Dean Learner). Marenghi and Learner, in turn, star in the fictional “Darkplace” as Dr. Rick Dagless M.D. and hospital administrator “Thornton Reed” (yes, the quotation marks are intentional). This isn’t just a parody of a bad TV show. It’s a vision of what an absolute egotist might turn in as a passion project, and the levels of mistakes that could occur when people who don’t know what they’re doing are utterly convinced of their own genius. The dialogue is endlessly quotable and funny, despite being delivered with dead-faced sincerity — the sort of bad writing that can only be achieved by good writers. That same attention to shittiness extends to every corner of the show, from the crap SFX, weird overdubbing, fake credits noting that the music is “based on melodies originally whistled by Garth Marenghi,” even the cats being visibly thrown onscreen to hit their cues.

Berry stars as actor Todd Rivers, who played Dr. Lucien Sanchez in the show-within-a-show. Sporting a gold chain and earring, and flexing his trademark deep-throated purr, Berry delivers another comedic performance built on winking, unlikely sexuality. Ayoade’s Dean Learner mixes the awkwardness he’s known for with an expertly tuned wooden amateurishness, while Holness nails the clueless bravado necessary to sell lines like “I’m one of the few people you’ll meet who’ve written more books than they’ve read.” The always delightful Alice Lowe (Prevenge) rounds out the core cast as Madeleine Wool, the actress behind Darkplace’s token woman, Dr. Liz Asher — a psychic and target of the show’s blatant misogyny. The Mighty Boosh’s Noel Fielding and Julian Barratt turn up in a few episodes, as does Stephen Merchant, giving the whole show an insidery feel.

Garth Marenghi’s Darkplace is a strange sort of comfort food that doesn’t benefit from distraction. You can’t just play the show in the background while you do other things. If you do, it’ll just be… well, a bad TV show. But if you have time to sit down and really focus for six episodes (hey, it’s a short season), then you’ll be rewarded with truly transformative badness — or “The Most Significant Televisual event since Quantum Leap” as Dean Learner would say. Not to mention it’s a much-needed Matt Berry fix to whet your appetite until What We Do In The Shadows returns on September 2nd!

Garth Marenghi’s Darkplace is available to stream on Amazon Prime Video now — provided you enter the search terms correctly (trust us, we ran into a few issues on that front).


← 'The Walking Dead' Teases the Beginning of the End (No, Really) | 'CSI: Vegas' Trailer and Premiere Date →