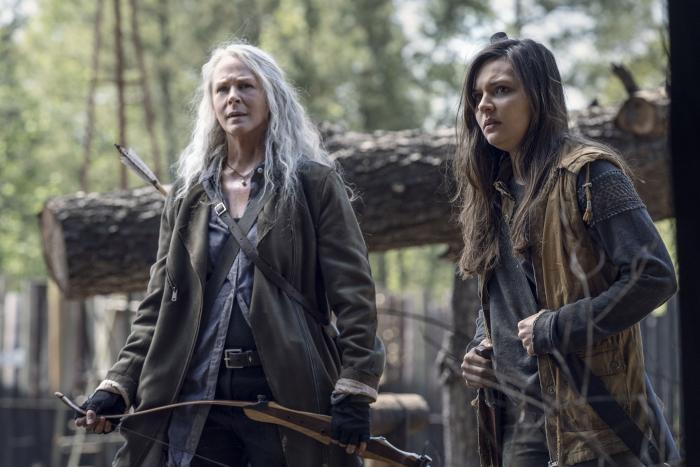 'The Walking Dead' Teases the Beginning of the End (No, Really)

I know many (most) of you jumped off The Walking Dead bandwagon after the grisly death of Glenn in the seventh season. I get it. But did you know that The Walking Dead is still on? Because it is, and in less than a month, it will return with the premiere of its final season … which is 24 episodes and will air in 8-episode chunks over the course of more than a year while allowing gaps for Fear the Walking Dead and The Walking Dead: World Beyond to air before also spinning off into a new TWD series focused on Daryl and Carol, which will probably be just like the old The Walking Dead only cheaper, which is by necessity because the ratings no longer support paying for that massive cast.

Yet, I am still stoked for the final season, because when Angela Kang took over as showrunner in the 9th season, The Walking Dead — at its best — became something it never really was over the first eight seasons: A legit horror series. The Whisperers (led by characters played by Samantha Morton and Ryan Hurst) were terrifying, and they did a bang-up job of culling much of the cast.

The Whisperers, however, have been conquered, although by the looks of the trailer, Lauren Cohan’s Maggie (who returns after a season and a half away) will don a Whisperer mask as she and the rest of the Alexandrians take on a new terrifying group of villains, The Reapers, who are original to the TV series. Meanwhile, another faction will continue their dealings with The Commonwealth, a city of 50,000 that has its own military, rock shows, sports teams, and many of the other amenities associated with the before-times (these pockets of civilization also exist on The World Beyond, which will eventually lead us back to Rick Grimes, who departed The Walking Dead in season 9 but who will return in a trilogy of movies that are still being written, nearly three years after he left the show).

Meanwhile, Negan — who mostly redeemed himself with Alexandria and became an ally after he helped vanquish The Whisperers — still has to contend with Maggie, who hasn’t cozied up to Negan for obvious reasons (he killed her husband).

That’s a lot of context for this trailer, but honestly, I’m most excited about a brief glimpse of Lauren Ridloff, who disappeared midway through last season, which was 17 years ago, thanks to the pandemic (she actually left the series briefly to go shoot The Eternals). It will be a long final season, but for those of us who have been watching for the last decade, it’s nice to know there is officially an endpoint (excluding the Carol and Daryl spin-off, the other two spin-offs currently airing, and the future spin-offs that are still in the works).

The Walking Dead returns to kick off its final season on August 22nd.