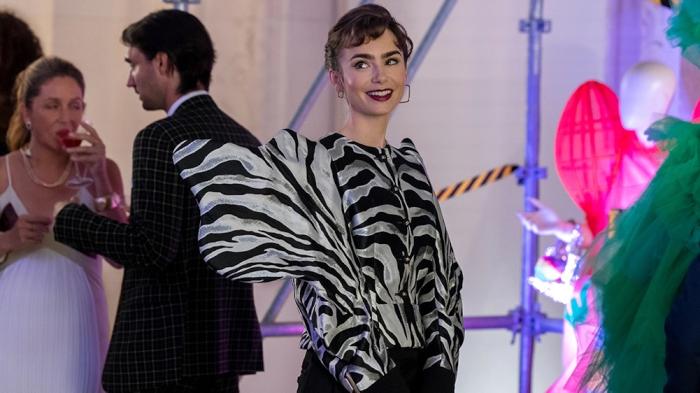 The clever twist Darren Star came up with for this series is taking someone as classy, yet still very American as Lily Collins, and having her be a hot mess in Continental Europe in a city that is pretty much the diametrical opposite of the United States (but don’t be fooled, France and Paris are also a mess, but a chic-mess). Netflix is going to pump this schlock every year until Lily Collins migrates to greener career pastures. You can always print cash by showing pretty thin people in haute couture parading around actual Paris, no matter how curated and idealized. After all, even the most depressive, garbage-strewn street of Paris will be on a whole other level compared to the average American city.

Last season saw Emily having to make two Big Life Choices, one that was all in her head and one that was actually relevant. The non-relevant one was choosing between her Hot French Chef or the Hot British Suit. She chose Hot French Chef, but unfortunately, he went back with her French ex and Emily’s former BFF, so in the trailer we see her settling into a relationship with Hot British Suit, who hasn’t realized yet that he is her sloppy seconds (except for one very spoilery frame in the trailer). Meanwhile, our US overboss (Kate Walsh) realized that Sylvie (Philippine Leroy-Beaulieu), her French boss, was terrible at the business end of things. As Sylvie leaves with the entire team of Savoir, Emily is forced to make an actually relevant choice: Stay with her American mentor to rebuild the company while gaining a promotion or go with her new French colleagues that apparently aren’t good at bookkeeping. It was strongly implied at the end of season two that she went with Sylvie.

Instead, the trailer reveals she took both jobs. Without telling her work-mums.

Considering that France actually has labor laws regarding working hours, I guess she could be able to manage the double workload. Won’t be much different than her schedule working in the US. Plus, pulling double-duty has worked great for her so far with men, upgrading from a US boyfriend that was the living embodiment of Wisconsin to Hot Sloppy Seconds British Banker. Why wouldn’t it work for her career?

The rest of the trailer is everything you expect from this series: Beautifully lit gowns, beautifully lit cities, sunny French countryside, not enough Ashley Park and the Hot French Chef and Emily still doing googly eyes to each other. There will be no character development, it will piss us off, it will make us wonder why Romantic Comedies always need to potray the lead character as our hero when she is unlikeable, and we will watch it twice over during the holidays. In a way, Emily in Paris is like a craving for McDonalds: Only once or twice a year.