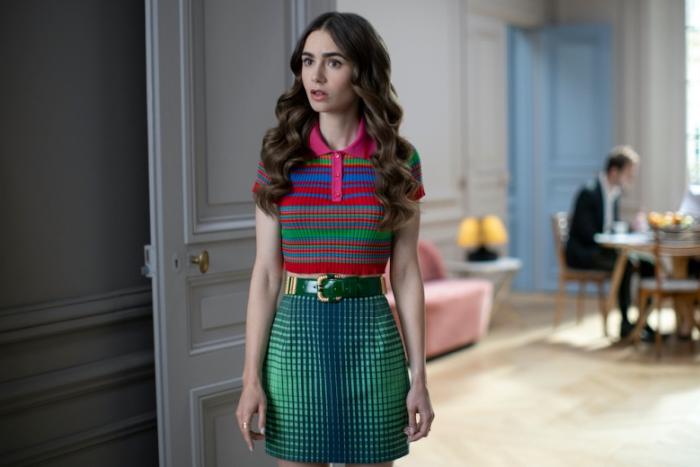 'Emily in Paris' Season Two: Bittersweet, And Better For It

Just look at the names of the first two episodes this season. “Voulez-Vous Couchez Avec Moi?” and “Do You Know The Way to St. Tropez?” These titles are so eminently ridiculous that they’ve somehow come around to being entertaining again, which is basically Emily in Paris in a nutshell. I’ve decided that this means that the show has chosen to embrace its trashiness and lean into the camp even more, which is the smart choice.

—Spoilers for season two of Emily in Paris below—

With the overblown, pandering-to-every-French-stereotype nature of season one, I often found myself fast-forwarding through clunky, misguided scenes. Clearly, they were trying to be cheeky and meta, and just as clearly, these attempts mostly didn’t land.

It didn’t help that our protagonist, Emily, is an incomprehensible blend of hot mess and Mary Sue. Someone who magically faced zero consequences even for her most egregious actions, someone who always survived her little dramas virtually unscathed. By the end of the season, I was more than ready for Emily to start experiencing some real consequences.

Who knows if it will last, but after viewing the first three episodes, I was pleasantly surprised to see course corrections on both fronts.

Instead of the racist, tone-deaf overtones of the first season, the show goes in a different (and welcome) direction. Yes, there are still plenty of ridiculous tropes in the mix, and I consistently found myself stifling the urge to knock the oh-so-jaunty beret off Emily’s head. Still, the depiction of how French and Americans see each other feels decidedly less problematic this time around. Softer, kinder, warmer — and also sharper, more self-aware, and biting.

Tonally, it makes for a much more interesting show, although let’s be real, it’s still mostly a trashy delight. There’s nothing wrong with that.

In our increasingly horrifying reality, we need shows we can watch without stakes. You don’t watch Emily in Paris to be blown away by dialogue, or acting, or plot development. You watch it for the outfits, the escapism, the incredible settings, and the impossibly sexy French chef.

It’s not all sweetness this time either, which is another welcome change. Buried below the glitter and champagne and cigarette smoke is the occasional slice of the dagger. Glimmers of an edge that lingers mostly out of sight, yet still feels present in a way it didn’t before. We even see this with Emily herself. By the end of the third episode, Emily is starting to face real personal and professional consequences for her frequently terrible choices.

Undoubtedly, she still has all the privilege inherent to being a beautiful, slender, cis white girl. All the innate confidence of someone who will never understand what it’s like to not have that privilege. When she ignores the feelings of others while trying every trick in the book to assuage her own guilt at sleeping with her friend’s boyfriend, I found myself wondering if she had any redeeming qualities at all.

However, I have to give credit to Lily Collins for Emily’s expression when she’s awkwardly cockblocking Camille at a party, or forcing a grin while also forcing a reunion between Camille and Gabriel. Because unlike that damn beret, her perfect mask does slip now and again. When it does, we catch a whiff of manic determination, of cheerful desperation. A frenetically brief acknowledgment that she can feel the stilettos, too.

It’s these darker hints of rot that make the rest of the sugary sweet fluff that much more appealing. Moments like Mindy’s employer sneeringly agreeing that her work papers “must be at home,” and dismissively relegating her to the post of “Le Dame Pipi” while curtly reminding her that she can only work for tips.

In true Mindy fashion, she still manages to conquer the stage and win the night. And yet, her fearful expression when she lies about her visa has proven surprisingly hard for me to shake.

Similarly impactful is Sylvie, an effortlessly elegant figure who steals every single frame she is in. Her prickly often inappropriate and surprisingly strong rapport with Emily is another unexpected season highlight (and much more interesting than their season one dynamic).

One of the best scenes yet has her smilingly encouraging a tantrum-throwing Pierre Cardeau to consider emblazoning a younger version of himself across a suitcase instead of his current visage. He hesitantly agrees, warming to the idea. Then she casually rips him apart for pandering to the notion that growing older means you grow into a less desirable version of yourself. When she scathingly asks if that is the message he wants to send the women of his customer base, I started cheering.

I don’t care how, but Sylvie and Rep. Katie Porter need to join forces and roam around telling idiots off. I’m manifesting this into the universe. Another highlight is a surprisingly pointed exchange between Emily and Gabriel. In an attempt to extricate herself from the messy love triangle she helped create, Emily tries to set boundaries with Gabriel (who is so hot I keep forgetting to be mad at him for cheating on the sweet and highly lovable Camille). In a nice little shoutout to Star Trek, she compares herself to members of Starfleet who follow their Prime Directive by not getting involved with the local aliens. Without missing a beat, Gabriel dryly notes that it is actually she who is the alien here, not him.

Her look of utter confusion and belated realization of “oh, yeah, I’m the one who is an outsider,” followed by the immediate dismissal of this uncomfortably-close-to-home truth is so American it hurts. It embodies the darker side of our reflection that we always fail to acknowledge. The exact same imperialist attitude that causes many Americans to label ourselves “expats” when we live in other countries, yet still refer to others living in our country as “immigrants.”

It was scathing and brilliant and unexpected and I fully adored it.

Don’t get me wrong, the show still has several flaws. For one thing, the writing is markedly inconsistent — this does not feel like a show with a unified writer’s room. In an unsurprising yet still disappointing twist, our female characters fail the Bechdel test over and over again. And yes, we do get many incredible shots of Paris, which I’m never mad about. Still, their attempt to capture this iconic and imperfect city often has the effect of flattening it, instead of elevating it like they so clearly want to.

All in all, while I’ve mostly enjoyed what I’ve seen so far. I’m not saying that Emily in Paris is a thought-provoking marvel or a layered commentary on the nature of humanity. This show is all style, with very infrequent glimpses of substance. What I am saying is that I hope the show continues to offer winking glimpses at the sharp beneath the sweet. And then shamelessly cancans out the door in a gloriously feathered costume while Americans roar out wine-soaked approval and Edith Piaf rings out triumphantly in the background.