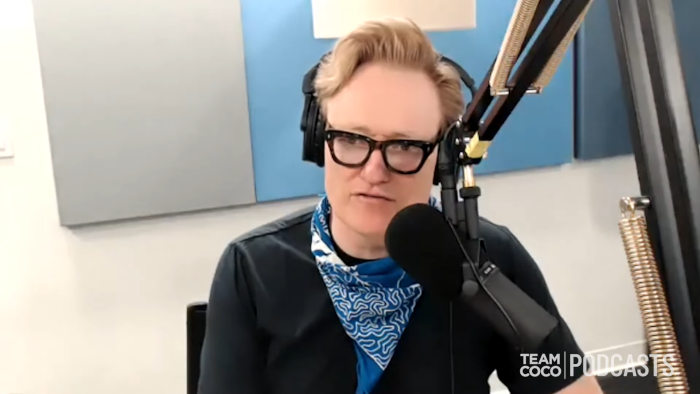 Do You Miss Conan? Here He Is Talking About 'The Human Centipede' For Ten Minutes!

I’ve never seen The Human Centipede. I don’t have any desire to see The Human Centipede. Not even in my drunkest, highest stupors have I thought, “It’s time to watch the ATM movie!” It’s not that I don’t like “bad” movies. Some of my favorite watching experiences have been films that, despite being ill-advised, are made regardless. More than anything, I don’t prefer movies that are gratuitous for the sake of being gratuitous. Despite my lack of desire to see these certain films, I would happily listen to Conan O’Brien describe every Human Centipede movie in the HC franchise.

In a recent episode of Conan O’Brien Needs A Friend, the conversation turned to The Human Centipede. The switch was very abrupt. One minute, we’re saying goodbye to Joel McHale, and the next, Matt Gourley just dives right in, so to speak. Just like that, the gang is talking about a movie where people are sewn together, ass to mouth.

They discuss the film extensively. Wondering how both Sona and Conan have seen the film? That is discussed. You’re curious about who Conan would cast in the film if he could? You get that answer. “Does Conan say ass to mouth or mouth to ass,” you wonder? All these questions and more are finally laid to rest. For something I would not watch even if paid, I got a great amount of enjoyment out of listening to and watching this conversation. It’s just so absurd that they would be discussing it in the first place. Even though, to be clear, this is not the first time Conan has dabbled in the world of The Human Centipede.

While I miss Conan on late-night TV, it is wonderful to still have his podcast. I feel like he gets to unwind a little bit more. He gets to be himself and talk about his… “favorite” movies. I still watch old sketches. If anything, I watch them more now. I’m just happy to know that there’s still new Conan content out there. No matter what is coming out of his mouth.