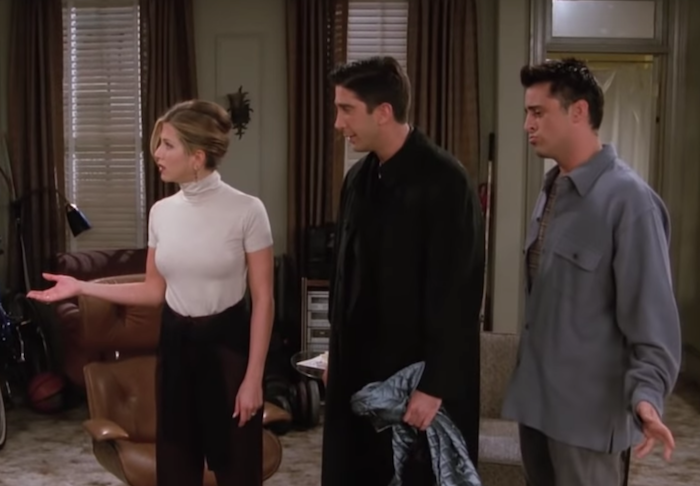 Did Netflix Bone Us All by Taking 'Friends' Off Streaming?

Friends, we’re here today to talk about Friends. The show, not the very special bond I have with all of you. We don’t need to talk about that because we know what we have—and not even the mole people can come between that.

So there I was, minding my own business when I saw this tweet pop up by none other than Jax Taylor. You know, one of my favorite people on Vanderpump Rules, a show I can no longer watch because they refuse to fire the racist, mediocre boring cast members that they brought on this season, and who promptly sh*t all over the franchise with their terrible, terrible selves? That Jax Taylor? (I miss you, Jax…😭)

Thank you for this @kristendoute clears a lot up… 😊 pic.twitter.com/y8RtGSsLYb

So hell, maybe taking Friends off the air does have something to do with it. What if the ability to stream Friends, a show that is a rip-off of Living Single, in America, a country that only accounts for less than five percent of the world’s population, really was the glue that was holding the fabric of our society together?!

I am more than willing to concede here, as I alluded to in the previous paragraph, that Friends is a show for white people by white people about white people—which is to say, it is very, very white. You know who is having a hard time staying home…?

So many people in low income communities have no work right now, people in numbers losing their livelihoods because they can’t go to work BUT a bunch of privileged assholes can gather in the name of organic kale. Ok then. #brentwood pic.twitter.com/tB9u7h7zkT

Just look at that photo, my friends. Looks like a lot of Friends fans to me… They’re out and about—and would they be if Friends were still available to stream?

I mean, let’s be honest, probably, because they’re selfish a*sholes. However, I’m still looking for someone to blame because the world is scary and people are dying and I’d like a distraction to give myself a little bit of grace during all of this, so hell, let’s blame Netflix for this, for the small part they (probably didn’t play) for the evening. Who’s with me?!

← Do Migraines Mean I'm Turning Into a Vampire?! | Ben Affleck Is Really Nailing Those 'Love in the Time of a Pandemic' Pap Walks →