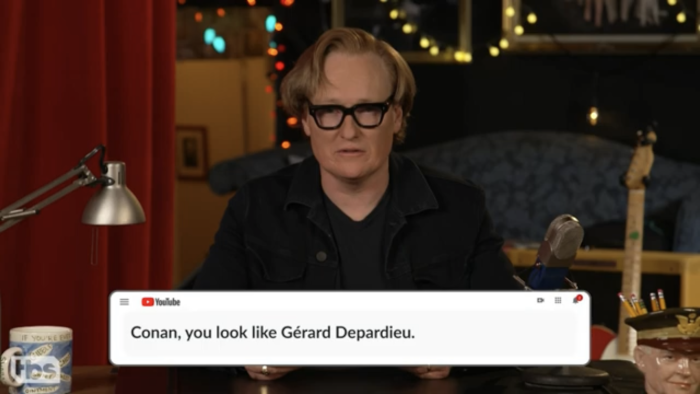 Conan O’Brien will be ending his almost 30-year late-night career and moving to HBO Max with a variety show. I’m still coming to terms with the news. Conan isn’t going away. Not only will he have the variety show but his podcast will be continuing as well. It’s the fact that he’s leaving the late-night landscape, something that is arguably in danger to begin with, that fills me with dread.

Conan was my gateway drug into late-night talk shows. He and his show created in me an interest in the format that persists to this day. I hosted a podcast for almost six years, and when we did live shows in NYC, I modeled them after Late Night. I love it. And while I know Conan is more than capable of other types of comedy, the mix of interviews and sketches is something he excelled at and I will miss it.

I watched his newest episode with those feelings engulfing my heart. So much so that I found myself laughing even harder than usual at his bits. Particularly, him reading comments about his hair.

If you’ve been watching or listening to Conan during the pandemic, you’ll know that he has let his hair grow out. Last night he read people’s comments about his hair and it was everything I love and will miss about his take on late night. The dry humor with which he reads the comments, followed up by the inherent silliness of the camera moving in closer and closer on his scalp, revealing a peaceful underwater landscape of orange seaweeds. It’s magic.

There is a very good chance that his variety show will feature similar bits. But its presence on the late-night landscape is something I’ve always treasured.

← Amber Ruffin Breaks Down The Bizarre Dean Browning, Dan Purdy, and Patti LaBelle Twitter Drama | The Best of Twitter's 'What's Something That Feels Like X But Actually Isn't' Meme →