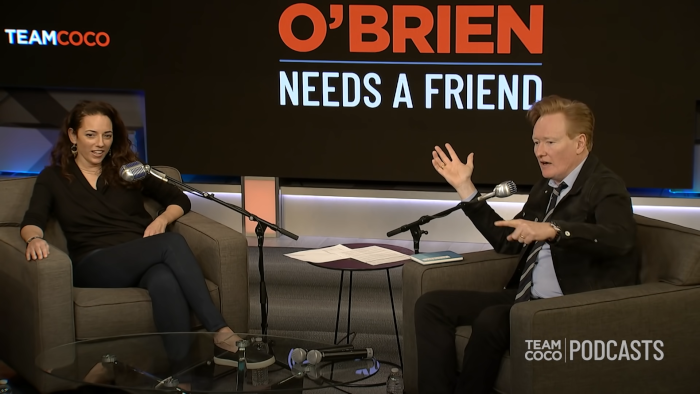 Conan Doesn't Think Los Angeles Was Excited For The Rams

I grew up in Western Massachusetts. There, everyone is a Red Sox “fan.” I use quotations because that “fandom” is usually reserved for the beginning of the season and if the Sox make the playoffs. I’m all for cheering on a team, but as someone who has cheered for a losing team their whole life (go, Texas Rangers WOO), I get resentful toward bandwagon fans. People who only support a team when it’s the popular thing to do. That’s why I was intrigued to hear Conan O’Brien describe Los Angeles during this Super Bowl run.

The Los Angeles Rams won the Super Bowl last night. Even if you don’t like the NFL, the game was a nail-biter, decided in the final two minutes. It was the kind of championship win that teams dream of. However, according to Conan O’Brien, the Rams won’t have the fan support granted to other championship teams. Conan claimed, in a new episode of his podcast Conan O’Brien Needs A Friend, that if you were to be in LA for the last week, you would never know that the Rams were even in the Super Bowl. No fanfare. No nothin’.

To be fair, Conan’s guest for the episode, Marshawn Lynch, disagreed. That said, Conan is from Massachusetts, like I am. If people aren’t shoving their team’s merchandise down your throat, then they’re hardly supportive. I need to feel like I might get beat up if I cheer for the wrong team, which almost happened several times growing up. These are the qualifications for team support.

But I don’t want any of it. I’m honestly shocked because this is the first time I’ve wanted to move to LA. I live in NYC now and people here can be just as obnoxious with their fairweather fandom. Except for Mets fans. The Mets could be three games ahead in the World Series, and you won’t see any bandwagon fans. The idea of a city not acknowledging their sports team at all? That I can get behind.