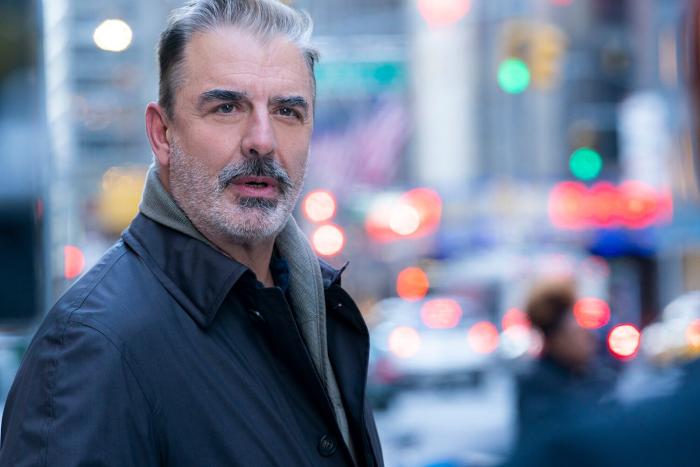 Earlier this month, Chris Noth reprised his role as Mr. Big on the Sex and the City revival series And Just Like That… (SPOILER) only to end up dying from a heart attack after exercising on his Peloton. Shortly after that episode aired, Noth then appeared in a cheeky ad for Peloton, in which he was alive and well, and poked fun at the response to Mr. Big’s sudden death. Last week, all of this was overshadowed when he was accused of sexually assaulting two women, followed by accusations of him sexually assaulting a third woman, and then the world was reminded that he was abusive toward Beverly Johnson back in the early ’90s when they were in a relationship together. (This also resulted in Peloton immediately removing their ad with Noth from social media and issuing a statement that the accusations against Noth must be taken seriously.) Just yesterday evening, it was announced that Chris Noth was fired from his recurring role as William Bishop, former CIA handler for Robyn McCall (Queen Latifah), on the CBS series The Equalizer.

“Chris Noth will no longer film additional episodes of The Equalizer, effective immediately,” Universal Television and CBS said in a joint statement Monday. The two studios had no further comment. Noth will be seen in one upcoming episode of the series that has already been filmed, as well as future repeats of episodes that have already aired.

Since the news originally broke, Noth has denied each of the sexual assault accusations.

“The accusations against me made by individuals I met years, even decades, ago are categorically false. These stories could’ve been from 30 years ago or 30 days ago — no always means no — that is a line I did not cross. The encounters were consensual. It’s difficult not to question the timing of these stories coming out. I don’t know for certain why they are surfacing now, but I do know this: I did not assault these women.”

That said, it hasn’t stopped other women from calling Noth out for his lecherous behavior toward women on set, especially his notorious reputation of lusting after female college students, and not even smelling all that great while doing so.

he once approached a friend (we were 19) and very blatantly asked to have sexy facetimes with her, in exchange for dinners. She said "no, I'm 19 and have a boyfriend," he said, "no one will have to know." this was in the middle of the day in downtown manhattan, he smelled bad. https://t.co/O30xypIkOG

at nyu it was common knowledge on campus that if you were a good looking freshman girl and bumped into chris noth you could reasonably expect an invitation back to his apartment https://t.co/gnbGlnftV8

The fact that CBS (as well as Universal Television, which produces The Equalizer) moved this quickly to send Noth to the unemployment line is shocking, if only because CBS has developed quite the reputation for ignoring and overlooking bad behavior from actors and showrunners that has occurred on the sets of their television shows, such as Bull and All Rise and NCIS: New Orleans and Hawaii Five-O. Much of this bad behavior has been written about by entertainment reporter Maureen “Mo” Ryan, who had recently interviewed Jeff Garlin right before his abrupt exit from his role on the ABC sitcom The Goldbergs.

It’s still too early to know any additional details of what else is happening on the set of The Equalizer right now, but it’s safe to assume that Queen Latifah, who is the lead actress and executive producer for the series, put her foot down and made it clear that something needed to be done and done immediately when it came to Noth being gone from the cast. It’s also too early to know whether Noth’s role as Bishop will be recast with another actor, or if the character will be killed off and replaced with someone else. Recasting with another actor can often be seen as a cheesy tactic used by soap operas, at least according to Caroline Dries, executive producer/showrunner for The CW series Batwoman, who has also dealt with cast exits and accusations of bad behavior on set.

Monday evening also saw Noth’s Sex and the City castmates — Sarah Jessica Parker, Kristin Davis, and Cynthia Nixon — issue a joint statement on their Twitter pages in support of the women who came forward to speak out against Noth.

Whatever happens next regarding Chris Noth, the accusations of sexual assault that have now become public, and The Equalizer, the most comforting thing about all of this (and this is of very small comfort, and not intended to minimize how serious these accusations are) is that after watching Noth play a duplicitous and unfaithful f-ckboy on both Sex And The City and The Good Wife, a lot of us have had years of practice in looking at Chris Noth on our screens with disgust because he doesn’t know how to act when it comes to treating the women in his life with respect.

And with that, I’m going to end this by taking us all the way back to 1994, when Queen Latifah dropped her classic track “U.N.I.T.Y.”


← James Cameron Doesn't Think Marvel Movies Are 'Epic' | As Omicron Surges, Even Trump Supporters Are Booing Trump for Getting a Booster →