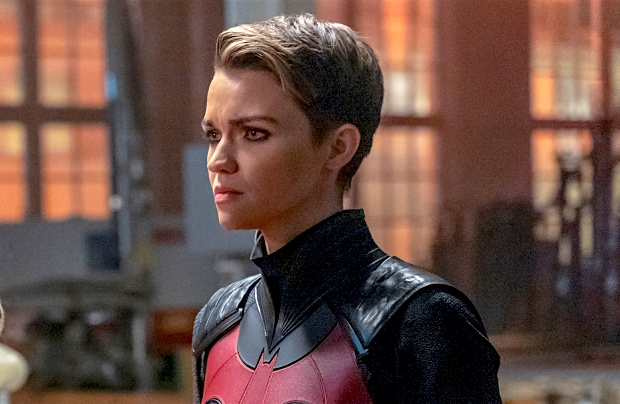 Ruby Rose, who played Kate Kane/Batwoman on The CW series Batwoman before they left at the end of Season 1 and was replaced by Javicia Leslie, used their Instagram Stories this morning to let the world know that the people calling the shots on that show were behaving very badly and that their conduct was the real reason why they were forced out of their role and left the show in the first place.

(For those of you having a difficult time reading Ruby’s words in the font that they chose, I’m going to transcribe it down below)

Dear CW: @CarolineDries @SarahSoWitty @GBerlanti et al. Enough is enough. I’m going to tell the whole world what really happened on that set. I will come for you so what happened to you never happens to another person again. And so I can finally take back my life and the truth. Shame on you.

Peter Roth, you are first up. You are Chapter one. Not sure if you left after getting promoted to the highest position because you couldn’t stop making young women steam your pants, around your crotch while you were still wearing said pants or if you left after putting a private investigator on me who you fired as soon as the report didn’t fit your narrative. either way, when it comes to you, there’s already an army waiting for u.

Cut to 3 weeks later after this video. It’s worse than abnormal. This was diagnosed years ago on set, but If I got an X-ray, “we wouldn’t make our day.” I have documented this for years. On top of that, I have enough documentation to make a 1-hour documentary…pray tell what else would you like me to share, the broken neck, or the broken rib split in two and the tumor?

To everyone who said I was too stiff on Batwoman…imagine going back to work 10 days after this…10 DAYS!!!!!!! (or the whole crew and cast would be fired and I’d let everyone down because Peter Roth said he would recast and I just lost the studio millions (by getting injured on his set) that is, be the one who cost so many people their jobs. Instead of spending half a day to rewrite me out for a few weeks to heal) 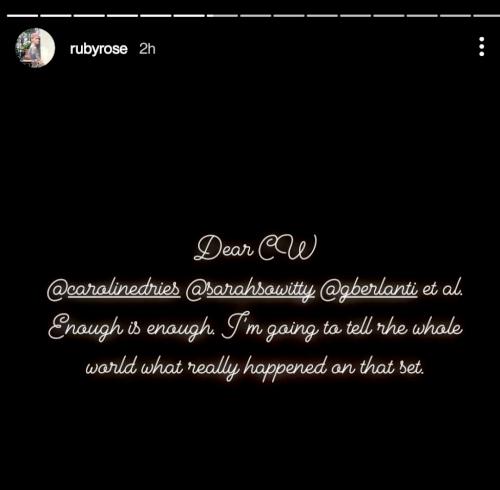 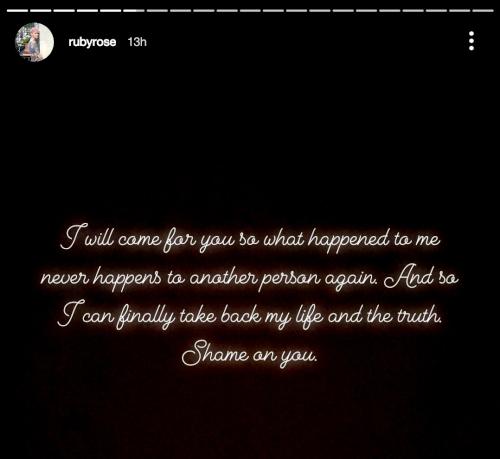 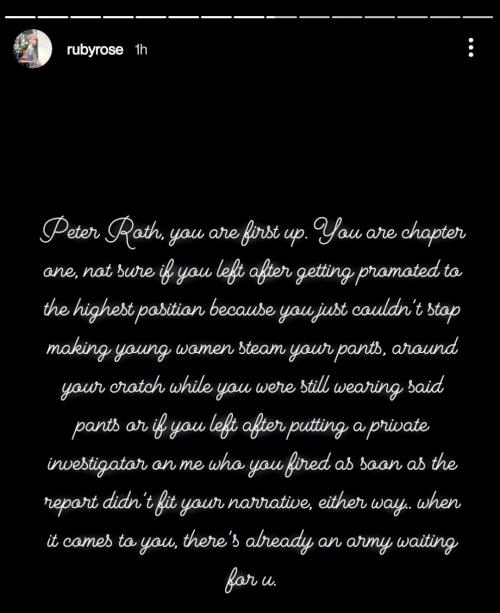 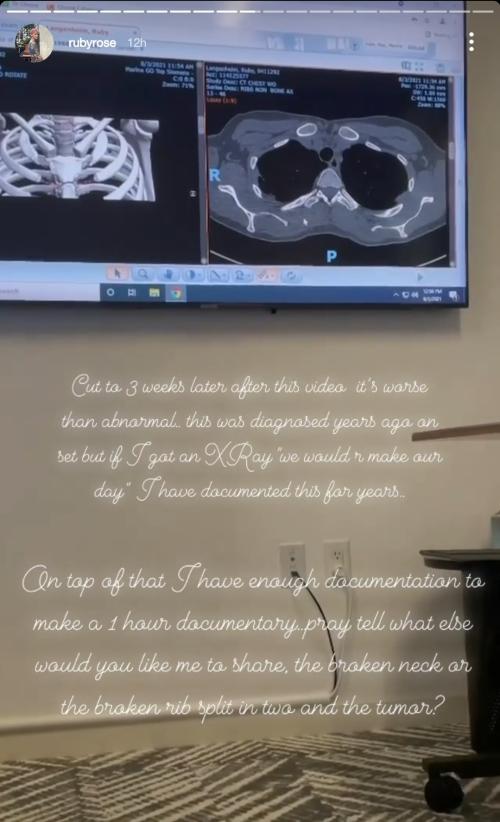 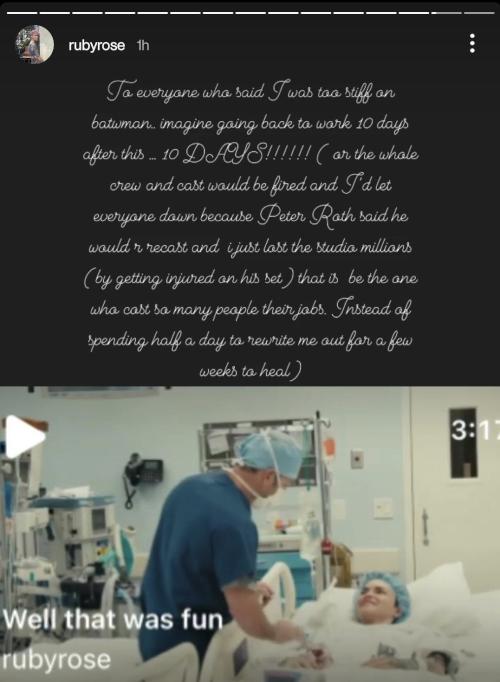 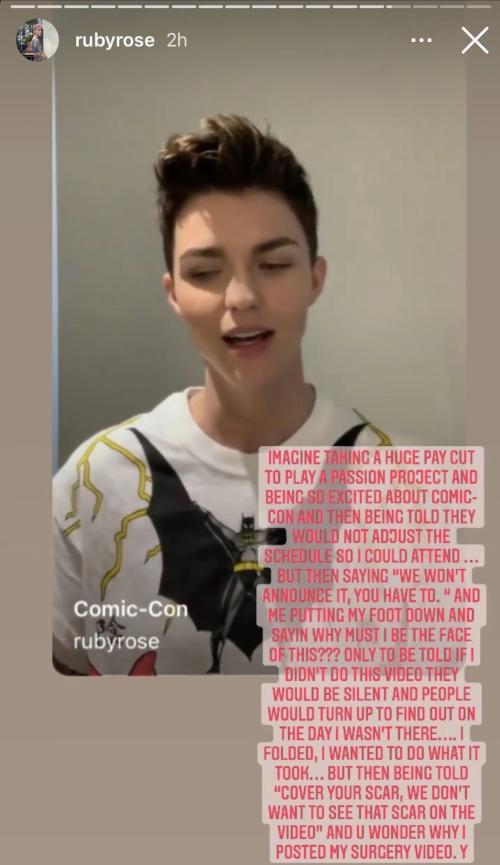 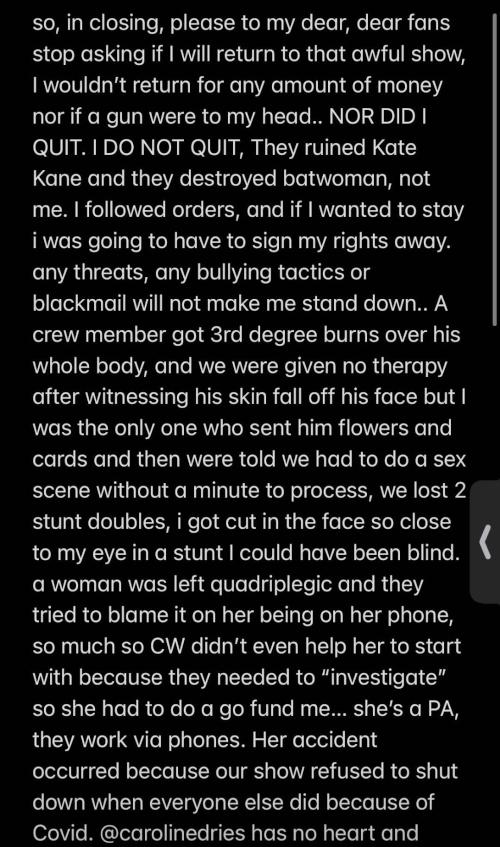 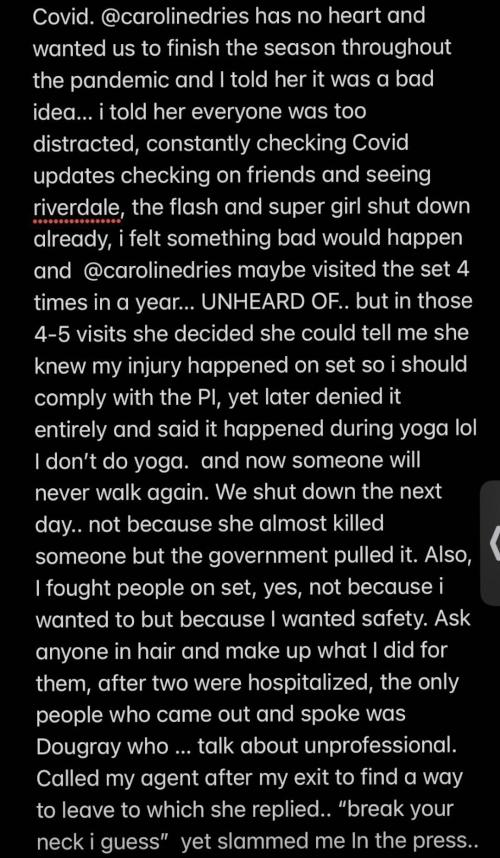 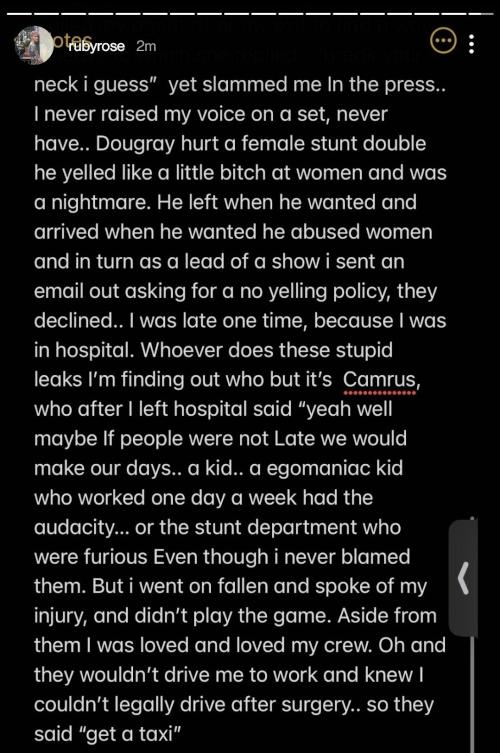 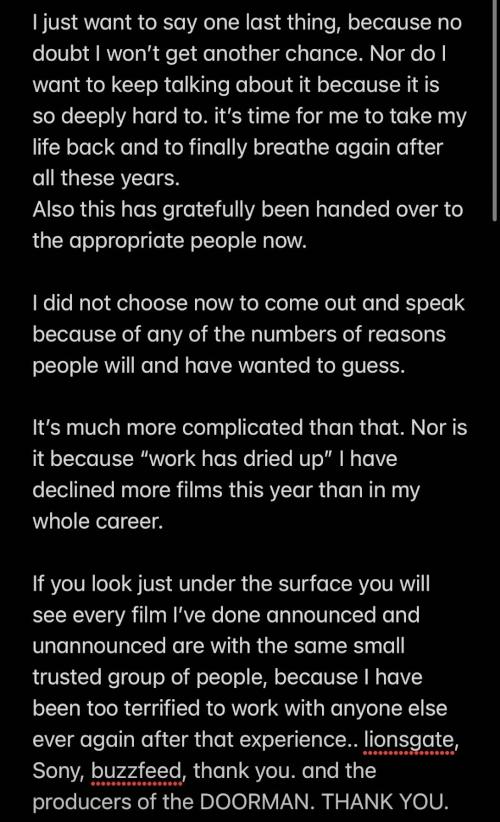 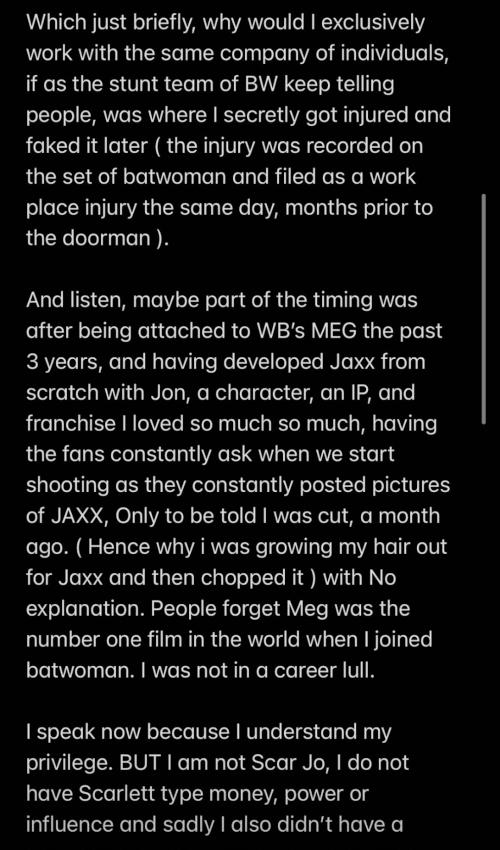 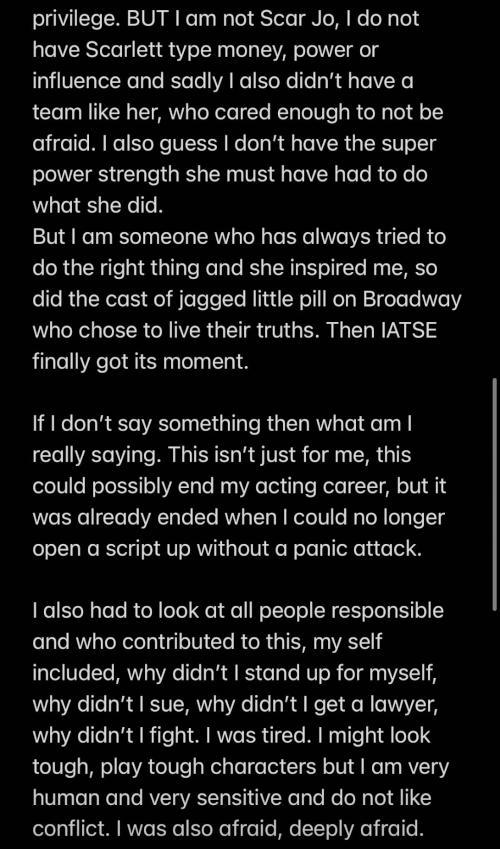 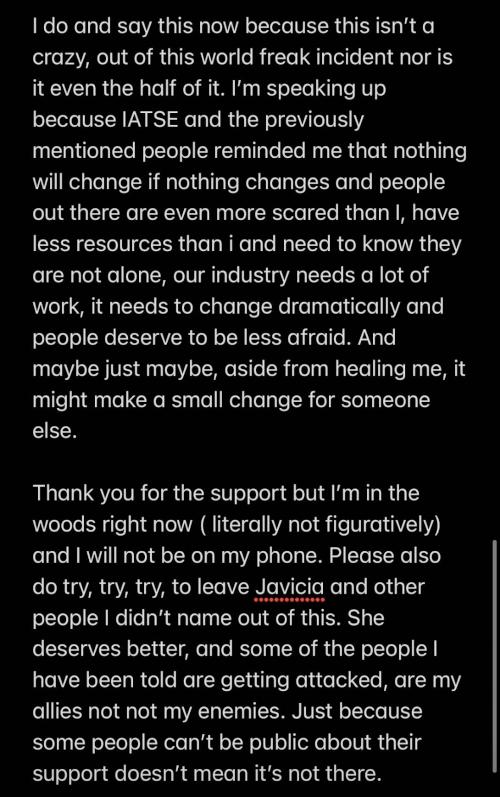 The people who Ruby mentions in their Instagram story are Batwoman showrunner Caroline Dries; executive producers Greg Berlanti (who has the same credit on every other Arrowverse show on The CW) and Sarah Schechter; Peter Roth, who was a longtime chairman of the Warner Bros. Television Group before stepping down earlier this year; and actor Dougray Scott, who played Jacob Kane, father of Kate Kane, before he stepped down from the role at the end of Season 2.

Since the moment they were cast to be the lead on Batwoman, Ruby has faced their share of criticism. From the show casting an actor who isn’t Jewish to play Kate Kane (one of the few notable Jewish comic-book superheroes) to being questioned about their acting ability, to being questioned about not actually being gay and how they shouldn’t be playing a gay character like Kate Kane (despite the fact that Dries made it clear that when casting for the role, she was looking for openly gay actresses), to their own bad behavior a few years earlier when they were accused of throwing their food at a waiter in a New Orleans restaurant. When Ruby left the show after its first season, they had originally stated that due to the long hours and the pressures of being the lead on a network television series was too much for them to bear (along with her stating that they became allergic to the latex costume that they had to wear as Batwoman) and that it was a mutual decision between them and The Powers That Be. Though, it was also alleged that due to all of those aforementioned pressures, Ruby became unpleasant for cast and crew members to work with, which made it easier for The CW to not block the exit door when they decided to leave.

But after sharing their experience on the Batwoman set today, a lot of people on social media appear to be in agreement that Ruby did the right thing, and that Caroline Dries (whose Twitter page is now locked), Greg Berlanti, and Sarah Schechter not only need to go, but that their alleged behavior (and that of Dougray Scott’s) is yet another sign of how Warner Bros. has become a toxic and unpleasant working environment for far too many people.

Joss Whedon being hired to replace Zack Snyder in the director’s chair for Justice League when the latter stepped away to be with his family after his daughter died by suicide, and with Warner Bros. claiming that this hiring decision was Snyder’s idea. This then led to Whedon making major changes to the screenplay (despite Warner Bros. claiming that very few changes would be made during reshoots), followed by his abusive behavior on set towards the cast and crew, particularly Gal Gadot and Ray Fisher.

Warner Bros. refusing to change the release date for Justice League and delay its production so that Snyder could possibly return to finish what he started, all so that studio chairman Toby Emmerich and former studio CEO Kevin Tsujihara could receive their year-end bonuses.

Candice Patton, who plays Iris West on The CW series The Flash, receiving very little support from the network for the years of racist behavior she has dealt with from fans.

Nadria Tucker dealing with racism when working on Superman & Lois, and not being fully compensated for her work. (And she had plenty more to say about her time on the show, and about the bulls-t that she dealt with in the writers’ room)

Ray Fisher clashing with DC Films president Walter Hamada, Joss Whedon, and producer/former DC Entertainment president Geoff Johns for their behavior during the reshoots of Justice League and for their interference during the investigation of what happened during those reshoots.

Ricky Whittle, who played Lincoln on The 100, leaving the show after being constantly bullied by showrunner Jason Rothenberg, and not just having his screen time significantly decreased, but his character was brutally killed off when Whittle chose to leave the show in order to star on American Gods.

Lying about upcoming projects (such as Jason Momoa starring in a feature-film version of Frosty The Snowman), announcing new projects, and making congratulatory statements about their recent successes (such as DC FanDome getting even more online views this year then they did last year) to distract from any news stories that could potentially embarrass them, including Fisher repeatedly calling out Warner Bros. via Twitter.

The sudden cancellation of the HBO series Lovecraft Country, despite the fact that its ratings were just as impressive as those of other HBO shows.

The sudden (but understandable) decision to release its entire 2021 slate of movies on HBO Max as well as in movie theaters without giving a proper heads-up to the actors and directors involved with those movies, a decision that resulted in many other actors and directors having some very harsh words for the studio, including Dune director Denis Villeneuve, as well as Christopher Nolan, who ended his professional relationship with Warner Bros. and is now working at Universal Pictures on his next film, Oppenheimer, set to be released in July of 2023.

It’s also not a good sign when an actor on one of your shows is seen liking tweets that call for your network to be boycotted.

WHAT IS GOING ON BEHIND THE SCENES OF ALL THESE CW SHOWS pic.twitter.com/RagwFjqujR

And according to Deadline Hollywood, Warner Bros. just released this statement saying that Rose was released from Batwoman by its producers, but it was because of an internal investigation of complaints about their on-set behavior.

“Despite the revisionist history that Ruby Rose is now sharing online aimed at the producers, the cast and crew, the network, and the Studio, the truth is that Warner Bros. Television had decided not to exercise its option to engage Ruby for season two of Batwoman based on multiple complaints about workplace behavior that were extensively reviewed and handled privately out of respect for all concerned.”

Naming names isn’t easy, but it must be done.

The multibillion-dollar merger between Warner Bros. and Discovery that was announced back in May isn’t expected to close until the middle of 2022, but everything that Ruby Rose just described about their time on Batwoman has been added to the increasingly long list of reasons why a lot of fans are hoping that the people who are calling the shots at Warner Bros. (Ann Sarnoff, Walter Hamada, Toby Emmerich, Geoff Johns, Caroline Dries, Greg Berlanti, etc.) receive this treatment from Discovery CEO David Zaslov as soon as he takes over the studio and decides to clean house…