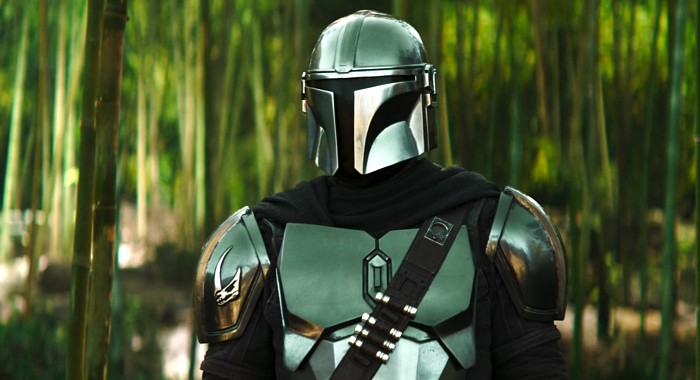 More Like ‘The Book of Everyone but Boba Fett,’ Amirite?

Previously on The Book of Boba Fett: As the show continued to face criticism for its lack of focus, things got even weirder as Chapter 5 bailed on the main story altogether and literally aired what can only be described as the Season 3 premiere of The Mandalorian. That’s not even an exaggeration. Not only did Boba Fett (Temuera Morrison) fail to show up in his own show, but Mando (Pedro Pascal) was the entire focus of the episode as the now just-barely-a-spinoff series did an exorbitant amount of place-setting for The Mandalorian. We’re talking everything from his struggles with the Darksaber and his place in his Mandalorian Covert to his separation anxiety from handing off Grogu (Baby Yoda) to Luke Skywalker. Mando even got a new ship!

It was all very rad, yet weird as hell because, again, the whole production completely shoved The Book of Boba Fett in a locker in favor of a far superior show. However, Fennec Shand (Ming-Na Wen) did drop in at the last minute to get things back on track, and surely, Mando’s desire to reunite with Grogu would have to wait until the real Season 3 of The Mandalorian. There’s only two episodes left, and it’s not like they’re going to burn another one on the adventures of Mando. That’d be crazy.

Once again, I’m sitting here absolutely confounded by what the hell The Book of Boba Fett is even doing. Despite a solid opening with Timothy Olyphant returning to his Space Raylan routine as Cobb Vanth, which seemed to signal a return to the main conflict between Boba Fett and the Pyke Syndicate, not even a few minutes later, we’re back in the cockpit with Mando as he pulls up to the planet where Luke is training Grogu. They’re actually doing this thing right now, and not only are they doing it, it’s the whole freaking episode! I still can’t believe it, and I watched it twice.

As Mando lands, he’s greeted by R2-D2 who takes him to a clearing where ant droids are building a familiar structure: Luke’s Jedi school whose fiery fate at the hands of Ben Solo/Kylo Ren was previously revealed in The Last Jedi. Everything might seem bright and hopeful at the moment, but if you’re a Star Wars head, you know there’s no happy ending here. In what will continue to be a parade of flexes, Ahsoka (Rosario Dawson) is also there for reasons that are never explained, and she attempts to run interference so Mando won’t disrupt Grogu’s adorable training with a vastly improved, yet still unholy CGI abomination calling itself Luke Skywalker.

Just like last week’s episode was a jarringly palpable step-up from the events of The Book of Boba Fett that crystalized why The Mandalorian is much better show, my dumb words can’t even begin to describe the magic of seeing Grogu again. (Case in point: I hated that name when it was first revealed. Now? Fully onboard.) Christ, my wife and daughter have had zero interest in The Book of Boba Fett, but hot damn, if the whole family didn’t gather around the television to “ooh” and “ahh” at the one foot tall merchandising bonanza. You could hear cash registers ringing in the background as he did backflips and force lifted frogs into his irresistible face. It was freaking delightful. 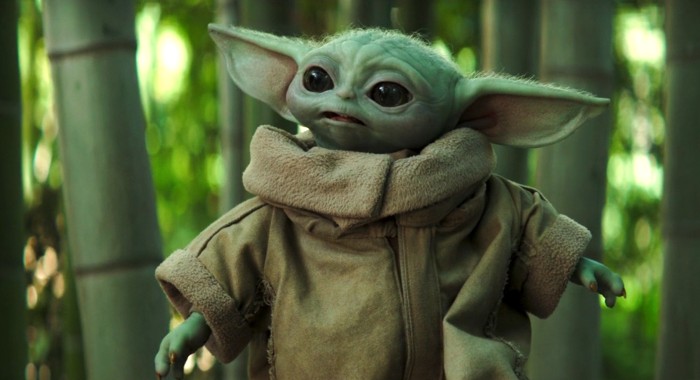 And then were was Luke. Uncanny Valley Luke with New Jedi Training Action.

After The Mandalorian Season 2 finale, I assumed we’d just see a neat little stunt that would maybe get trotted out one more time as Luke returns for another brief stilted moment to hand Grogu back to Mando. In what’s becoming a recurring theme here, wrong again, Mike. Just like The Book of Boba Fett went full Mando without even blinking, Chapter 6 went whole hog on their new Deep Fake Luke. You’re going to stare at his weird, emotionless face the whole time, and you’ll like it.

Don’t get me wrong, the VFX work for Luke is an amazingly impressive leap from his awkward appearance in The Mandalorian. Lucasfilm has done truly incredible work narrowing the Uncanny Valley, but it’s impossible not to feel it. Especially if you watch the episode twice like my dumb ass. While this Luke absolutely works for a surprisingly lengthy amount of time — Remember when this show was about Boba Fett? — there’s still that little voice in your head that knows Mark Hamill is freaking 70 and what you’re seeing is an affront to god and nature. Also, speaking of voice, there’s something slightly off about Luke’s equally expressionless speech pattern, which is usually what happens when its being generated by a neural network that will one day kill us all.

On a story level, by design, Luke training Grogu is overshadowed by knowing what happens in The Last Jedi and watching Luke make the mistake of adhering to the old Jedi ways that led to the laser sword religion’s downfall. However, that sense of foreboding also makes Ahsoka’s presence all the more odd, if not downright gratuitous, because she personally witnessed the Jedi crumble under their own hubris. She knows there’s a better path, and yet, there she is lecturing Mando on how Grogu can’t have “attachments.” Not to mention, fans have been dying to see Luke and Ahsoka finally meet, and to use a cliched phrase, they just tweeted it out. The two of them interacted with all the intrigue of a ham sandwich before Ahsoka f*cked off to get ready for her own spinoff. And after watching what this show has been doing, good luck with that, lady. (Am I not thrilled to see what was once an electric character, and one of the best things Star Wars has done in the past decade, get reduced to MCU-like cameos? Maybe!) 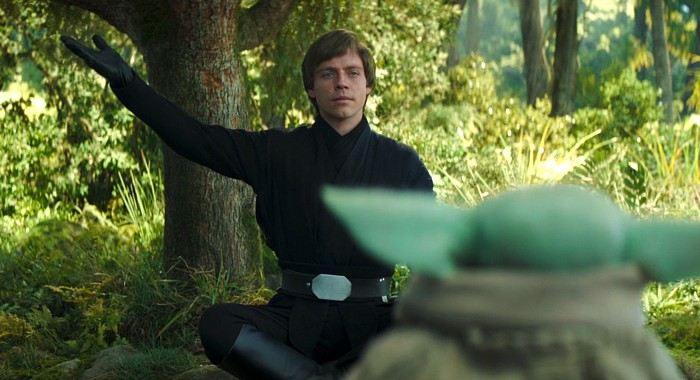 After spending a considerable, yet whimsical amount of time watching Grogu learn how to do backflips, the show shockingly returns to The Book of Boba Fett’s main story, if such a thing even exists anymore. As is now the custom, the show spends very little time with this plotline, but to this episode’s credit, Boba Fett actually makes an appearance — and does not say a single word.

Folks, I know it seems like I’m wildly exaggerating these past two episodes, but I watched Chapter 6 twice just to verify that I wasn’t imagining things. Boba Fett does not talk. Literally, the only interaction he has with another character is to nod at Mando. These are facts, and it’s why I have zero patience for elitist condescending hot takes like this:

I have never seen a title give more people more fits. Titles aren't a contractual promise, folks. I'm way more interested in what's happening than whether or not it is the Alll-Boba-Fett-All-The-Time show. After what I saw last night, who gives a shit what the title is?

When your main character in a seven-episode limited series is completely absent and doesn’t even talk as an entirely different show eats up two whole episodes, it is all kinds of valid to wonder what the hell is going on with this thing. I’m not normally one to side with “fans,” but this isn’t some weird tantrum like the Snyderverse. The Mandalorian barreled into an already wobbly show and laid bare what was becoming painfully obvious: It’s hard to make a show about Boba Fett when a better Boba Fett show already exists.

Anyway, again, this episode tries to get its act together as Mando reconnects with Cobb Vanth in hopes that the people of his town will help Boba Fett fight off the Pykes. While Vanth reluctantly agrees, he doesn’t have time to recruit the townsfolk when the show drops yet another one of its flexes: The live-action debut of Cad Bane.

As Bane saunters into Freetown — and, yes, there’s been an alien dressed like a cowboy running around Star Wars this whole time — he offers to pay the town to sit out the brewing fight between Boba Fett and the Pykes. Naturally, Vanth isn’t too keen on the offer, nor is he thrilled with his new deputy distracting him by not staying inside like he was told. Eventually, the moron deputy attempts to draw on Bane, which results in the bounty hunter gunning both men down. While the deputy is definitely dead, Vanth’s fate is less certain. But more importantly, the show is finally moving towards a final conflict — or is it?

While the Vanth scenes would’ve been a perfect bookend to the episode, the show had to squeeze in one more scene with Luke and Grogu as if Disney needed to do any sort of heavy lifting to promote Season 3 of The Mandalorian. Because the conflict in Book of Boba Fett is barely there, we’re gifted with a new dilemma as Luke drops a heavy choice on Grogu.

He must either choose to take the Mandalorian armor left by Mando or take Yoda’s lightsaber and continue on his path to becoming a Jedi. Reacting with an adorable “What the shit, dude?” look on his face, the credits roll before Grogu can make a choice. Will that decision go down in The Mandalorian or will The Book of Boba Fett continue to be cannablized by its host series? At this point, I’m done making predictions because for all we know, the season finale will be 45 minutes of Amy Sedaris reconnecting with her Jawa lover, which I would watch. Get that furry ass, girl.