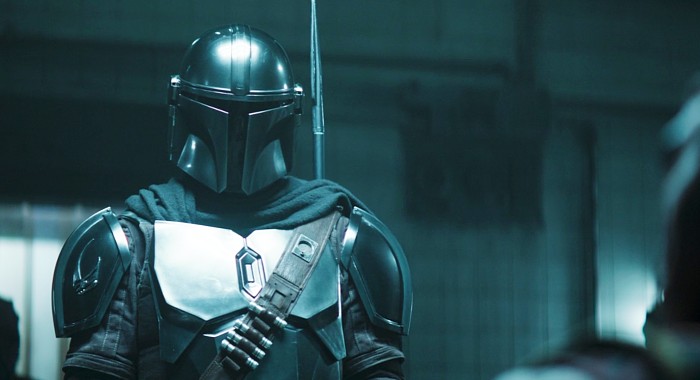 'The Mandalorian' Just Ate Whatever Lunch Boba Fett Had Left

Previously on The Book of Boba Fett: In yet another flashback episode, Boba Fett (Temuera Morrison) learns that the speeder bike gang that killed his Tusken Raiders tribe work for Bib Fortuna, who’s taken over Jabba’s Palace following the events of Return of the Jedi. In order to enact his revenge for the Sand People, Boba needs his spaceship back, which is still parked inside the palace. Fortunately, Fennec Shand (Ming-Na Wen) is left for dead nearby — See: The Mandalorian Season 1 Episode 5 — so Boba takes her to a mod parlor where she’s given a brand new robot stomach to replace the gut she got shot in. With their partnership formed, the two rescue Boba’s ship, which is no longer called Slave-1 to the cries of sad, shitty nerds everywhere, and proceed to settle some scores. Namely, mowing down the speeder bike gang and dropping a sonic bomb down the Sarlacc’s throat.

At this point, the show is pretty much caught up with when we last Boba in The Mandalorian Season 2. Unless it wastes even more time exploring how Boba and Fennec tracked down Mando on Tython, which could very well happen! Anyway, back in the present, Boba adds Black Krrsantan to his ranks and arranges a meeting with all of the local Tatooine crime lords to address the Pyke Syndicate moving in. The other lords point out that the Pykes only have eyes on Boba’s territory, which he doesn’t dispute, so he proposes a tenuous agreement where he’ll personally get rid of the Pykes as long as the other crime lords stay neutral. All they have to is not get involved, and Boba promises to knock this whole thing out.

There’s just one small problem: Like most of crime-lording Boba Fett has no idea what to do, and it’s up to Fennec to think of something. Fortunately, she has an idea about hiring muscle, which cues up The Mandalorian theme in a not-at-all subtle bit of foreshadowing. Surely, our boy Mando is going to show up for a brief cameo as The Book of Boba Fett continues to flesh out its story and focus on its main character.

Because being right is better than sex to petty wiener bloggers like myself, I’m going to quote what I wrote in the recap for the first episode where I questioned the decision to go back to the Boba Fett well after Lucasfilm had so throughly and successfully drained it dry for The Mandalorian:

Lucasfilm finally managed to flesh out the person behind the helmet, except no wait, they did it with an entirely different Mandalorian bounty hunter who was modeled after Boba Fett’s original look from The Star Wars Holiday Special. For some ass reason, Lucasfilm really wanted to do a cool gunslinger/samurai-style Boba Fett story, but just not with Boba Fett. Which is why it was very weird that, after having The Mandalorian eat his whole lunch, Boba Fett was dropped into The Mandalorian and handed his own spinoff series despite having every inch of his thunder stolen.

To be clear, The Book of Boba Fett Episode 5, “The Return of the Mandalorian,” is easily one of the strongest, if not the strongest piece of Star Wars that Disney+ has put out to date. It is f*cking outstanding. There’s just one very large series-breaking problem.

It’s not an episode of The Book of Boba Fett.

I don’t know what other sites or social media you folks read, but if you’ve been seeing things like this episode is essentially the Season 3 premiere of The Mandalorian, that is correct. From start to finish, it is 100% an episode of The Mandalorian. I’m talking Boba Fett isn’t even it, and Fennec Shand literally shows up for 30 seconds at the end to haphazardly connect the whole hiring Mando thing from last week. Again, the whole thing rips, and Bryce Dallas Howard delivered an absolute banger — but it’s not an episode of The Book of Boba Fett.

To put a point on how jarring “The Return of the Mandalorian” is to watch, I’m extremely hesitant to recap the episode because it gives away a surprising amount of details for the next season of The Mandalorian and is now essential viewing. More importantly, because it involves me being right, in roughly ten minutes, Mando entirely ate whatever tiny bit of lunch Boba Fett had been accruing during his spinoff. The guy shows up and does literally everything that fans have been wanting from Boba Fett:

— Says badass things while staring down an opponent.
— F*cks up a whole room of dudes.
— Literally cleaves a sucker in half with the Darksaber.
— Gives zero shits while dealing with the rich assholes who hired him.

It’s great, and that’s just the opening scenes. From there, Howard unspools a remarkably lore dense and visually spectacular episode that took me from being lukewarm about The Mandalorian to breathlessly stopping everyone I know and saying, “Did you see the new episode of The Mandalorian? It f*******cks.” Naturally, what holds the whole thing together is Baby Yoda, which is particularly amazing because he’s not even it! But, damn, if his presence doesn’t blanket the whole thing. 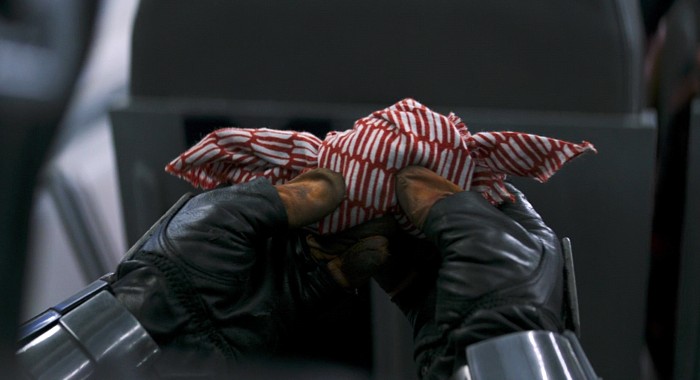 When last week’s episode practically screamed from the rooftops that Mando was coming back, a lot of people joked that they wanted to see him wearing sweats and surrounded by empty bags of Doritos after handing Baby Yoda over to Luke Skywalker in the Season 2 finale. Obviously, the show didn’t go that far, but the dude is not a good place. There’s a palpable anger inside of him from the jump, and the situation doesn’t improve when he reconnects with his Covert, who now look like even weirder zealots with the Darksaber in the mix. The poor guy is clearly torn between being accepted back into his clan and wanting his sweet, little TV gold of a son back. It’s hands down the best character work we’ve seen so far for Mando.

Except, oh wait, it’s not his show! Again, I’m severely underselling how freaking weird it was to watch this episode as my mind ping-ponged back and forth between “Jesus Christ, this is the best The Mandalorian ever!” and “Wait, why is this happening in the middle of The Book of Boba Fett?” And that’s the whole ballgame, isn’t it? That so many people are positively reacting to this episode highlights more than ever that The Book of Boba Fett isn’t bringing much to the table because, as I’ve argued from the start, everything that people want from Boba Fett already exists in Mando.

Also, and I cannot stress this enough, you can never go wrong with letting Amy Sedaris cut loose. Granted, she’s been pretty great during her brief cameos in the first two seasons, but whoever made the call to take her off the leash in this episode deserves a raise. It was goddamn lightning in a bottle.

Alright, I’ve already said too much, but there is good news (sort of). If you’ve been reading these recaps and don’t give a shit about Book of Boba Fett, but do care about The Mandalorian, you can jump right into Episode 5 without having to watch a single second of the first four. The disconnect is that huge. Dive right in.