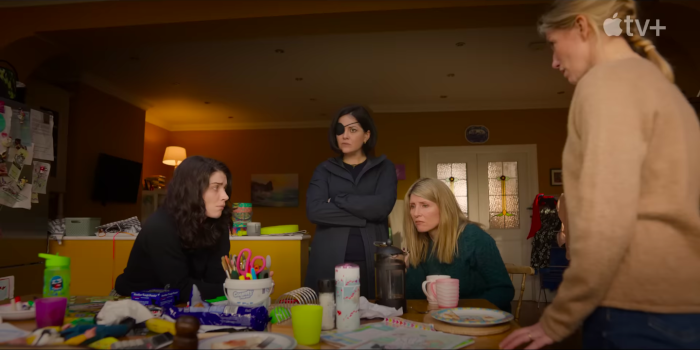 It’s Springtime for Irish Actresses, not just a passing sparrow in Saoirse Ronan’s growing success. For the first time since ever, the average film buff can close their eyes and name as many consolidated Irish actresses as they can name famous Irish actors. We are nowhere near parity, but at least it is no longer a male-dominated scene. We’re long past the times where a major project involving Irish female characters would end up casting Julia Roberts, Cameron Díaz, or Nicole Kidman doing terrible accents.

One of the leading Irish actresses behind this shift is Sharon Horgan and her production house Hello Merman. Pajibans probably know her well from local favorite Catastrophe, or as Aisling Bea’s big sister and co-star in This Way Up, both of which she produced with a focus on stories about women, told by women.

Her latest project comes from her deal with Apple TV+, and she’s back inhabiting that Big Sister Energy she carries so well. Bad Sisters is a dark comedy about five Garvey sisters, played by Anne-Marie Duff (Shameless, Sex Education), Sharon Horgan, Eva Birthistle (The Last Kingdom), Sarah Greene (Dublin Murders, Normal People) and Eve Hewson (The Knick, Behind Her Eyes). The latter four maybe, probably, totally killed the shitty and abusive husband of the eldest, played by Claes Bang, and following their trail is an obnoxious insurance claims agent played by Brian Gleeson because it’s illegal not to have a Gleeson in any Irish film or TV project.

The series is an adaptation of the Flemish’s Clan, and if they are following similar story beats, Sara Greene’s character lost her eye in an accident caused by her brother-in-law, which in the original is called “De Kloot” (the Cock), so I’m looking forward for the many times the sisters will refer to him as “the C*nt” in glorious brogue.

The series looks gorgeous and stylish, and I’m not only talking about the cinematography. The chances it disappoints are too small with that cast and that premise. Stories about morally ambiguous women are still few and far between, much more so in Irish media, though that only counts if you think getting rid of a personality-draining, abusive husband is something “morally ambiguous”.

Hopefully, it becomes the vehicle that launches Sharon Horgan and her costars into proper stardom. The first two episodes premiere on Apple+ on August 19.


← 'Surface' on Apple TV+ Is Tired Gaslighting Thriller | Review: 'Relax, I'm From the Future,' is 'Terminator' by Way of Zany Youth →