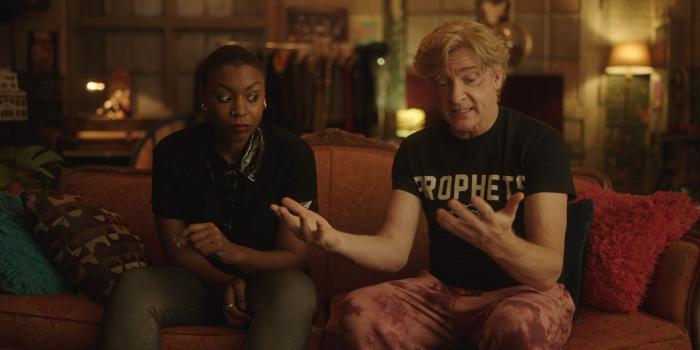 Fantasia Review: 'Relax, I'm From the Future,' is 'Terminator' by Way of Zany Youth

When the Fantasia International Film Fest dropped its 2022 lineup, it was impossible not to be drawn to Relax, I’m From the Future. Billed as a “sci-fi, comedy” about time travel led by Rhys Darby, I was immediately reminded of Mega Time Squad and made sure to grab a spot in line. These two genre fest darlings have a lot in common. They’re led by New Zealand comedy giants, they’re cracklingly funny, they add an analog spin to time travel (with meticulously created and executed rules), and they’re full of heart. Relax, I’m From the Future, however, trades some of the dry wit for a warm and hopeful take on our modern anxieties.

The millennials/ Gen Z really came to play for this year’s festival, and it shows in this delightful feature. Though Rhys Darby’s future-man, Casper, takes the lead, the story is held together by the journey of Holly (Gabrielle Graham). Holly is a portrait of this generation’s angst, a queer Black woman oscillating between indie concerts and lamentations about the environment. Her kindness and wishes for a better world lead her to showing kindness to Casper, a man on the street elated to get his hands on a hot meal. Soon, Casper confesses that he’s from the future and uses his knowledge of later events to show Holly the magic in the world around her. And just when the story seems a bit too close to telling us to relax and enjoy the wretched world that other people built, it pulls the rug out from under everything and takes the ruling class to task.

The metaphor in this joyful romp is a bit heavy-handed at times, but not without reason or merit. All the seen members of the ruling-future-class are white and have cavalier attitudes about the destruction of the planet. Saving the world is left to a Black woman held up by her white male ally. But its absurdist take on the state of the foreseeable end of the world works to balance escapism with an all-too-real story about present day. It’s Terminator by way of the next generation of zany modern anxiety.

This is writer/ director Luke Higginson’s first feature and appears an extension of his 2013 short with the same title. The short centered on a man’s attempted suicide getting interrupted by a traveler claiming to be from the future. This element is present in the feature-length adaptation and is used to raise the stakes of the core story as a means of elevating its eventual twist. For the feature, Percy is a struggling meme artist played by Canadian genre icon, Julian Richlings, who lit up audiences in Anything for Jackson and Vicious Fun. On the note of Canadian iconography, much like The F word, this flick uses Toronto (and nearby Hamilton) as a highlighted background rather than dressing it up like New York. In doing so, it gets to write love letters to the city’s punk scene, its colorful residents, and lends an even more specific element to the generational angst experienced by Canadian city youth.

Relax, I’m From the Future’s title is so knowing and loaded, it’s a whirlwind to unpack. The futuristic hero carries enough knowledge to be a soothsayer, though the protection that grants is somewhat worthless. It creates warring senses of nihilism and hopefulness that fight each other through the end credits. Throughout the story’s twists and turns, the phrase can consistently be attributed to Casper, the intention and receipt of it ever changing from being comforting to pedantic. It’s the most delicious way of allowing us to face our constant feelings of dread while simultaneously being uplifted and empowered. What a wild ride.

Relax, I’m From the Future played at Fantasia and is set for release in 2023.

← 'Bad Sisters' Trailer: Sharon Horgan And An Avengers Assemble of Irish Actresses Team Up Against A Terrible Husband | 5 Shows After Dark: 'Riverdale' Sixth Season Finale on The CW, 'City on a Hill' Third Season Premiere Showtime →