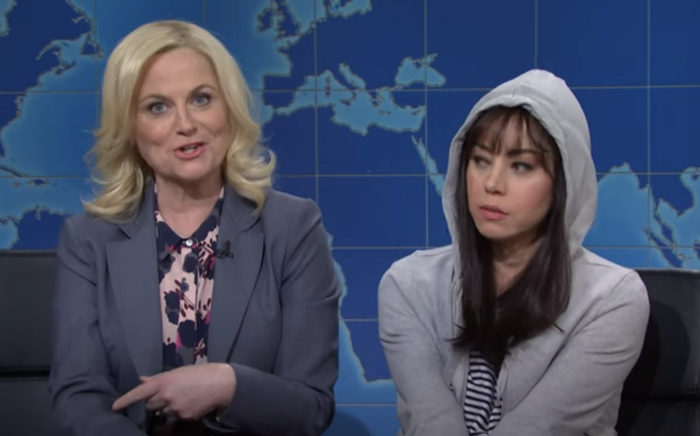 Cold Open — It’s an NFL on Fox after-show, which seems like an excuse to have Molly Kearney do an impression of a senile Terry Bradshaw but also Bowen Yang does George Santos, “the real Bo Jackson. The first African American quarterback to ever dunk a football.” Kearney is great, but the Santos jokes are played out. (Watch here) (Score: 3 out of 10)

Aubrey Plaza Monologue — Plaza, who used to be an intern on SNL, gives viewers a tour of SNL, which is modestly amusing, buoyed by a cameo appearance from Amy Poehler herself. (Score: 5 out of 10)

Miss Universe Pagaent — There was a viral video going around a couple of weeks ago where Miss Universe contestants introduced themselves and where they are from, and this is a parody of that. If you didn’t see that video, this is just a bunch of pageant contestants screaming weird things. It’s just silly and nonsensical enough to work. The judges are, inexplicably, the Property Brothers and Tony Hawk. (Score: 7 out of 10)

White Lotus Parody — Black Lotus is the same as White Lotus, except that it’s run by Black people, who “have no time for nonsense.” Aubrey Plaza does not play her character from Lotus, and after you see who she plays, I wish that she did because it’s a great sketch, except for Plaza’s character. “Welcome to Black Lotus, Bitch.” (Score: 6 out of 10)

Game Night — Plaza and Mikey Day play a couple who is new to game night playing Taboo. They’re very good, but the way they get to their answers is … very Aubrey Plaza-esque. Maybe the Aubrey Plaza-esquest. This is the Mat sketch of the week. You’ll see why, Mat. (Score: 7.5 out of 10)

Catholic School Morning Announcements — Plaza and Kearney play nuns doing the morning announcements, and listen: I love Aubrey Plaza, but Plaza’s sense of humor has always been very specific to around 2013: Sarcastic, mean, dirty, and deadpan-nonsensical. I dig it, but it’s not for everyone. (Score: 6 out of 10)

M3GAN — Chloe Fineman is M3GAN, a new “gay icon.” Aubrey Plaza is M3GAN 2.0, who is loved by gay men even more. Allison Williams shows up and the gays make jokes about her getting her butt eaten on Girls. It’s great. (Score: 7.5 out of 10)

Weekend Update — I will say this: Colin Jost delivers a Hillary Clinton joke that is the best “Update” joke of the entire season, maybe of the entire Che/Jost era. Otherwise, there are too many George Santos jokes (Bowen Yang appears again, twice in the same show as Santos), but when it’s not about Santos, Che and Jost kill it. Also, Aubrey Plaza does a segment as her Parks character, April Ludgate, which is an opportunity for Leslie Knope to show up, too, which gives Poehler an opportunity to do an “Update” joke. (Score: 8 out of 10)

Avatar: Way of the Water Parody — Heidi Gardner and Aubrey Plaza play Arizona lesbians pretending to be Navi. It’s a big letdown from “Update.” (Watch Here) (Score: 3 out of 10)

Dovato — A few of the newbies do an ad for Dovato, an HIV medication, but Devon Walker’s character can’t stop adding, “But I’m not gay,” and other variations. Eh. (Watch Here) (Score: 4 out of 10)

Black Widow — James Austin Johnson plays a detective in a black-and-white skit where Plaza plays the Black Widow, a woman accused of killing five husbands. The truth is, however, she’s just really into old guys, and they die of old age. So, a bunch of old-guy jokes. Sharon Stone (who appeared, weirdly, in a Sam Smith musical performance) makes a cameo here, too, as the Widow’s mother. (Watch Here) (3 out of 10)


← New Allegations Against Brett Kavanaugh Concealed by the FBI Surface in Doug Liman Doc | 5 Shows After Dark: 'The Accused' on Fox Series Premiere, 'The Last of Us' on HBO →