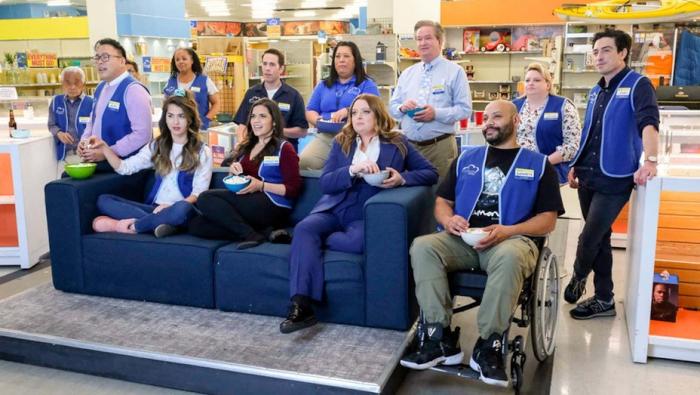 Attention All Shoppers: 'Superstore' Is Closed

I think we’ve already said most of what needs to be said about Superstore over the course of six seasons, about how it’s one of the most consistently enjoyable sitcoms on television, about how it tackles a lot of social issues uncovered anywhere else, and how it is remarkable for the way in which it depicts racially and socioeconomically diverse characters, and also how it deserved better than its quiet cancellation in the midst of a pandemic.

I’m not sure that there’s anything else I can add after its delightfully satisfying, enormously sweet finale, except to say that I truly love Superstore. I can’t believe that it remained so under the radar for six years and, I am so happy it remained under the radar for six seasons. It was like The Office, except that it never got chewed up by the machinations of pop culture, meme’d to death, and dissected to within an inch of its life by Reddit. It’s the kind of show that did just well enough to survive for six seasons, but not so well that the network tried to tinker with it. It’s the kind of show that was mostly allowed to be what it wanted to be. Critics adored it but didn’t obsess over it weekly, and so it was given the freedom to have the occasional bad episode without us complaining that the show had jumped the shark.

Mostly, though, I want to say how much I loved these characters. Jonah and Amy were the nominal leads, but I never got tired of them, in part because they never overshadowed the ensemble. They also rarely overplayed their romance, and I never stopped wanting the two to end up together. They were Jim and Pam, but without the big romantic gestures. They didn’t need them. I always rooted for them. I loved how they complemented each other, how they helped each other to broaden their perspective. I love that Jonah never stopped supporting her, even when he ended up on the opposite side of the union/manager dynamic. I also love that Amy never stopped supporting the workers, even when she was elevated to management.

I love Matteo, and I love that they never gave him an easy win — he remained an undocumented worker struggling to maintain his life in the United States until the very end, though he also remained as spirited and determined as ever. I love Glenn, even though he had an annoying voice and was a terrible manager, because of how loyal he remained to his employees and because he made the best of a sh*tty job. I love Cheyenne for figuring her shit out without ever losing her identity. I love Dina for being brash and self-possessed and completely true to herself. I love Sandra because she was a wonderful mother, wife, and friend, but she could also stir some shit. Carol and Marcus were great characters, too (although I did not love either one of them), and they were always terrific foils. But Garrett? He was my favorite. Garrett was the voice of reason. He was also the heart of the show, but he buried that heart five feet deep. It rarely came out, but when it did, it beat like a marching band playing a Pink anthem at halftime. I love that man.

I love Superstore, too, and after six years, losing it is like losing out on another weekly hug during a time in which hugs are already in short supply. It’s not as inspirational as Ted Lasso or as heartfelt as Schitt’s Creek or as funny as Brooklyn Nine-Nine, but it feels like a close runner-up in all those categories, the show we never talked about with friends, but the one on our DVRs and watchlists that we always watched first.

Farewell, Superstore. May your second life in streaming be stronger than your first.


← Sharon Osbourne Is Out at 'The Talk' | Review: Udo Kier's 'Swan Song' Is A Magnificent Celebration Of A Bitter Old Queen →