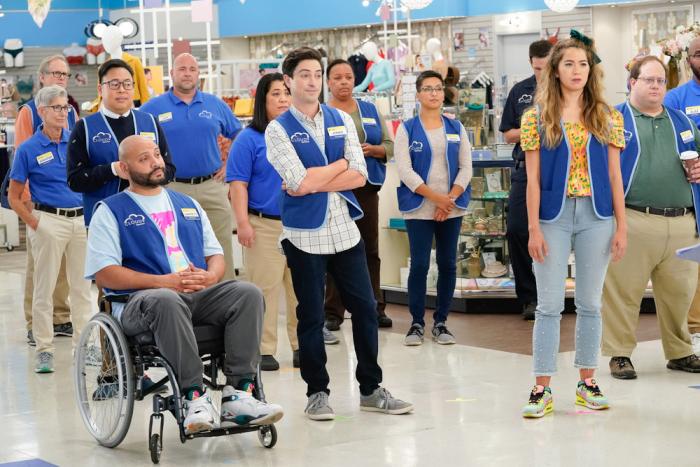 Superstore is one of the best comedies on television right now, but the powers that be at NBC have decided that isn’t good enough and are canceling the show. After 100+ episodes of genuine comedy, thoughtfully balanced storylines, and camaraderie between its characters, Cloud 9 will be closing its doors after six seasons. It seems almost cruel for Superstore to be ending at all, especially since the show is one of the only sitcoms that seamlessly tackles real-world issues without ever leaving its overly bright retail landscape. The news of cancelation arriving shortly after America Ferrera’s final episode indirectly suggests that the folks at NBC don’t believe the remaining ensemble cast is strong enough to carry on without her (which is simply not true).

I love workplace comedies. No other genre comes close to marrying realism with the absurdity of corporate America. Superstore is at the top of the list in that regard. I discovered the show later than most, but I was immediately hooked and binged the first four seasons (twice) in a short amount of time. Its premise — about a group of employees who work at a retail chain called Cloud 9 — was both relatable and sustainable. Anyone who’s worked retail will tell you about the weird, sometimes funny, sometimes horrific stories that happen on any given day (when I worked at Target, someone took a pregnancy test in the dressing room and then left her urine in a shoe box), so Superstore had a large well of stories to pull from.

I was immediately taken by the show’s wit, its lighthearted warmth, and the clever way in which it slipped in pithy commentary amid the everyday monotony of work. The writers had the ability to turn seemingly mundane conversation into lively and relevant debates that it deftly executed without condescension. These discussions became one of the show’s strongest qualities, bolstered by a tremendous ensemble cast that included Ferrera, Ben Feldman, Nico Santos, Colton Dunn, and Lauren Ash among several others.

Superstore is grounded and ridiculous, simultaneously aware of reality and comfortable taking jabs at society’s failings, corporate greed, and the gray area that life’s idiosyncrasies so often occupy. While medical dramas were handling the pandemic with a jolt of heroism and unconscious dreams (Grey’s Anatomy’s McDreamy says hello), Superstore’s grasp of the pandemic and its effects on the Cloud 9 employees felt relatable and all too familiar — having to deal with anti-maskers, meetings over Zoom (and that pesky mute button), questions on how to wear a mask and how long to wash your hands, and corporate’s empty platitudes and vague safety protocols are handled with a sense of gravity and levity.

Superstore doesn’t place its characters on pedestals, either; it digs into their humanity, the everyday nuances that make up their lives and experiences. Cloud 9 is the crossroads where people of various backgrounds converge and its strength is in its diversity. No other sitcom can hope to tackle such a vast array of socially relevant topics the way Superstore does with such lucidity. The struggle to form a union, the cruelty of ICE and all that it stands for, and the abysmal healthcare system have all been issues addressed on the series, be it through a personal lens or by way of general breakroom discussions (of which there are many).

The writing has been smart from day one and, while the sitcom had a slight dip in quality following showrunner Justin Spitzer’s departure after Season 4, Superstore was still miles ahead of its competition. I tuned in for many reasons — the commentary, the deadpan humor, the random shoppers, employee antics, Amy and Jonah’s romantic relationship, Dina’s interactions with pretty much everyone, and Mateo and Cheyenne’s friendship.

All of these reasons are enough to make the case for Superstore’s longevity, but NBC decided to pull the plug just as the series was starting to bounce back. Six seasons is a good run, but if other, lesser sitcoms can make it to a seventh or eighth season, then I don’t see why Superstore couldn’t have done the same. 2020 has been a rough year and I don’t trust any other comedy to be as culturally aware the way Superstore is.

It’s a great loss and I’m mourning despite Season 6 not being over just yet. Would this cancelation have come if Ferrera had decided to stay with the show? Maybe. I’m not blaming her for leaving, but the news of cancelation is a hard pill to swallow mere weeks after her departure. Superstore has so much comedic potential left and it’s a shame that it’s being kicked off the network when we need it most.