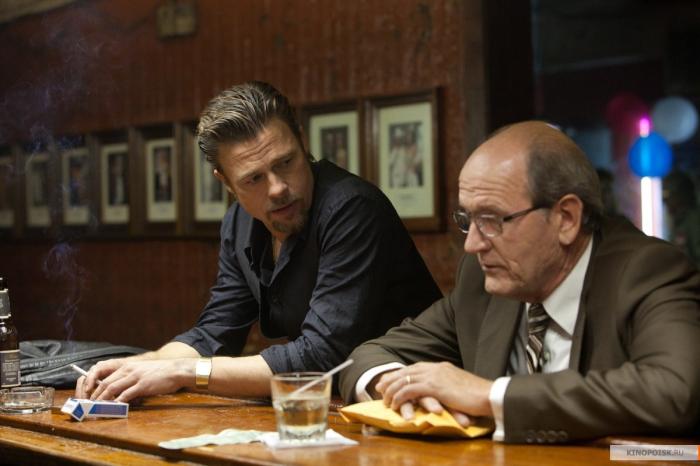 One day. One day I’m sure I’ll get bored of quoting this film.

Barack Obama (on TV): [on TV delivering his election victory speech] … to reclaim the American dream and reaffirm that fundamental truth that out of many, we are one.

Driver: You hear that line? Line’s for you.

Jackie Cogan: My friend, Jefferson’s an American saint because he wrote the words, “All men are created equal.” Words he clearly didn’t believe, since he allowed his own children to live in slavery. He was a rich wine snob who was sick of paying taxes to the Brits. So yeah, he wrote some lovely words and aroused the rabble, and they went out and died for those words, while he sat back and drank his wine and fucked his slave girl. This guy wants to tell me we’re living in a community. Don’t make me laugh. I’m living in America, and in America, you’re on your own. America’s not a country. It’s just a business. Now fucking pay me.

The US has got to be one of the most propagandised countries in the world. I remember when I learned that the pledge of allegiance was a real thing, for example, and not just some made up sh*t they stuck in American films. That blew my mind. And that’s just the tip of the iceberg. But it all makes sense. When you live in the heart of a globe-spanning capitalist empire, you’re gonna be subject to a never-ending stream of relentless myth-making and arsebackwards hogwash. That’s just the way it is. Otherwise you run the risk of revolution. When you consider that modern propaganda as we know it—and as we so often call it: ‘public relations’—was invented in the States, then it starts to make even more sense that the country’s citizens have been re-wired to a degree that would make fictional dystopias jealous. As the father of PR himself, Edward Bernays, once said:

The conscious and intelligent manipulation of the organized habits and opinions of the masses is an important element in democratic society. Those who manipulate this unseen mechanism of society constitute an invisible government which is the true ruling power of our country. …We are governed, our minds are molded, our tastes formed, our ideas suggested, largely by men we have never heard of. This is a logical result of the way in which our democratic society is organized. Vast numbers of human beings must cooperate in this manner if they are to live together as a smoothly functioning society. …In almost every act of our daily lives, whether in the sphere of politics or business, in our social conduct or our ethical thinking, we are dominated by the relatively small number of persons…who understand the mental processes and social patterns of the masses. It is they who pull the wires which control the public mind.

And on that note, here’s a fun Twitter thread prompted by the question: ‘What’s something that’s clearly a scam but that Americans have been conditioned to believe is ‘normal?’

What’s something that’s clearly a scam but Americans have been conditioned to believe it’s “normal”?

Flying too, where are the trains?

Even more insane…look how much the USA govt spends on healthcare as it stands and has the worst outcomes. It spends the most per capita and it's not even nationalised. America is broken. It is literally a failed state.

When I tell my European in-laws about our family’s healthcare and education costs they straight up do not believe me. It’s inconceivable to Europeans or Japanese to pay $150k/yr for 2 kids in college or $100k to die in a hospital

- American Exceptionalism is not just a scam, it’s a disease
- Viewing poverty as a personal failure instead of a feature of capitalism
- Everything about the criminal justice system

The nonsense belief that poverty is the "natural condition of man" and Capitalism is the only way out of it.

War on drugs, war on terror, never ending drone strikes, riot cops beating up peaceful protestors in clear violation of our right to peacefully assemble, our government spying on us, etc

Having to break the bank to bury your loved ones

US outlets keep publishing feelgood stories about how some kid raised enough money to pay off the school lunch debts of a bunch of kids at their school, and it's supposed to make you feel warm and mushy but the entire world is like "wtf is school lunch debt"

Corollary: that people who are rich necessarily did something to deserve it

The biggest scam is portraying the military engaged in ” Humanitarian Issues” or defending the country. When in reality they are in service to the oligarchs and the greedy corporations .

Serving in the military to avoid having to pay student loans

That your teeth and eyes aren’t part of the rest of your body and should have separate insurance.

Pre-existing conditions. Everywhere else that just medical history. Here, insurance companies use it as an excuse to deny you coverage.

Dropping the bomb on Japan was the "right thing"

The US is the "greatest country in the world"

Education is elitist and unnecessary

We really need huge portions to feel "full" when eating

There is no reason to speak another language than English

Filing taxes. Other countries just send you a bill. US uses human error to prey on poor people and let rich people game the system. https://t.co/MMwcEaHF2O

I feel like there’s another quote here that is pretty relevant… Oh yeah, of course! Here it is, straight from the one and only:

And hey, lest it looks like I’m being mean by singling out the evil empire for some light ribbing, here’s the same thing but for the old, has-been one:

Zero hour contracts, getting a bonus for doing your job, posh voice and wealth makes you intelligent. The revolving doors to top jobs for woefully inadequate people based on the old school tie brigade.

That we're a plucky little country which pulled itself up by its bootstraps and didn't plunder, rape and pillage our way around the globe for 300 years to accumulate… everything we have.

That everyone else is an immigrant but when we do it we're 'expats'.

The electoral system. 80 seat majority on 43% of the vote is not “normal”.

That the BBC and British Press are decent, honest and honourable.

Landlords. Essentially glorified ticket touts, but inexplicably, our country is geared towards their interests.

People with posh names and accents have the right to rule them. The UK and the USA are always the good guys. The BBC is a fair and balanced public service broadcaster.