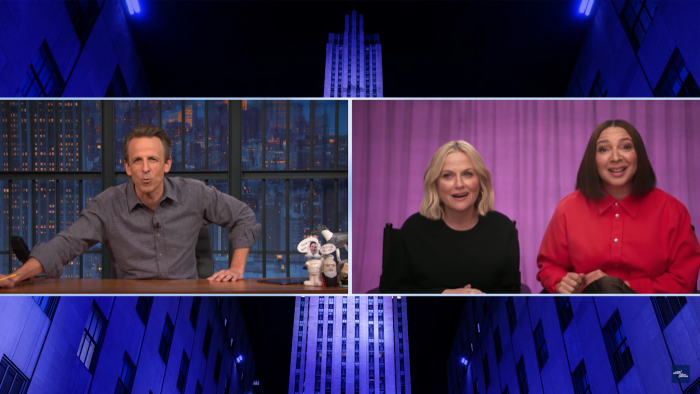 Saturday Night Live will be celebrating the beginning of its 50th season right when we have our next Presidential election. I don’t know if that’s good or bad. I think Lorne Michaels forced me to write that through some sort of telepathy. The man has a lot of power, but soon he could be taking a step back. He’s run the show for a long time (not including the Doumanian/Ebersol years), and eventually, everyone needs to move on. But, if Lorne leaves, who will take over for him?

On the most recent episode of Late Night with Seth Meyers, the host posed this question to two fellow former SNL castmates: Maya Rudolph and Amy Poehler. Their answer was smart and inciteful, mainly because they avoided giving one. The two abstained from jumping into that snake pit and chose instead to blame communication problems on Zoom.

This is the only answer to the Lorne Michael succession question. Unless you’re Kenan, who has pitched himself for the job. Rumors were swirling at one point that Colin Jost was being groomed for the position. But, alas, none of that will matter until Lorne retires. Until then we can just have fun with Amy and Maya and Seth and Fred Armisen.

I wouldn’t call this an interview. It was more of a fun get-together with some pre-written bits. There’s a casualness to it. Amy and Seth break constantly. As they should, because Maya Rudolph is one of the funniest people alive no matter what they’re doing. Fred pops in again toward the end for a nice callback. It’s a fun time between old friends that isn’t alienating or full of inside jokes.


← 'Three Pines,' 'Willow,' 'Mythic Quest,' And More On Podjiba! | The 'Avatar: Way of the Water' Early Reactions Are Beyond Effusive →