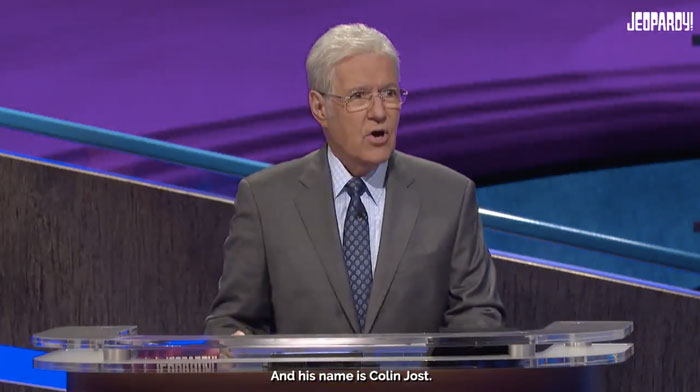 Colin Jost is on TV every week telling bland and tone-deaf jokes on Saturday Night Live’s Weekend Update, and has been for five years. He co-hosted The 70th Primetime Emmy Awards with his Weekend Update co-anchor Michael Che. And he’s currently engaged to Scarlett Johansson, one of the most famous actresses in the world. But the contestants on Jeopardy’s Tournament of Champions were completely stumped when asked to identify him.

Adding salt to the wound, Jeopardy then notified Jost on Twitter to let him know.

Looks like our contestants missed one or two of your weekend updates, @ColinJost. @hardvardlampoon pic.twitter.com/MaHvW6NtDE

No one on Jeopardy being able to identify Colin Jost from both a description of him and a photo made me so happy.

Nobody knew Colin Jost on Jeopardy! just now even with a picture of his face. As is right

I’m watching jeopardy with my parents and nobody knew who Colin Jost was. I guess that’s why their on jeopardy and we’re sitting at home

@nbcsnl Just in case no one was watching Jeopardy, there was a clue that the answer was Colin Jost. They even showed a photo of him but still no contestant knew who he was. Just saying….

Don’t worry @ColinJost even if they didn’t know who you were the rest of us were screaming at the TV!!! @Jeopardy you know you’ve made it when!!!

@ColinJost does it make it better or worse that it’s Tournament of Champions week on @Jeopardy? pic.twitter.com/LkrmiBtaNK

If there’s not a joke at @ColinJost’s expense on @nbcsnl about no one on @Jeopardy knowing who he is, especially since these are the really smart people. I’m gonna be sad.

← Just Remember, Boy George, Shutting Up Is Also an Option | Trumpdates: It's Going to Be an Ugly Week →