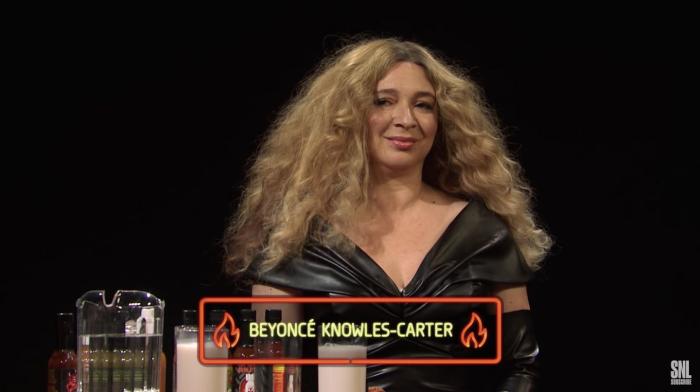 Cold Open — The cold open is a game show set in Miami Beach called Snatched, Vaxed, and Waxed where the host of the show — played by Maya Rudolph — cheers, “We’re so close to the end! Let’s ruin it!” Three dudes try and guess whether a woman is, well, snatched, vaxed, or waxed. It’s a bad cold open, and not a great way to return to the show after a month off. (Watch Here) (Score: 3.5 out of 10)

Maya Rudolph Monologue — Momma Maya Rudolph imparts some wisdom to the new cast members, whose names I do not know yet, except for Punkie Johnson. Basically, she recounts the plot of Breakfast Club. It’s cute, although short of “good.” If you play “Don’t You Forget About Me” at the end of anything, however, it’ll get at least a one-point bump. (Score: 5.5 out 10)

Beyoncé’s Hot Ones — Beyoncé kicks it off with “Hitler’s Anus Roasted Reaper.” I wasn’t sure which way it would go — Beyoncé unfazed by hot wings, or the opposite — and I’m glad to report that it’s the opposite. “Got my ass drinking milk now!” Absolutely hilarious. (Score: 7.5 out of 10)

Weekend Update — Jost gives a pretty good rant on guns, and while they do give Biden shit for his “cheat sheets,” they also amusingly contrast them with Trump’s “cheat sheets.” Jost also has an ace McConnell joke. Cecily Strong does Sidney Powell, because she always does the unhinged drunk women. Bowen Yang covers the rise of Anti-Asian crime, and he is phenomenal. (Update: 7 out of 10; Yang: 9 out of 10)

Boomers Got the Vax — The rap is hilarious, but also really f**king infuriating, which is to say: It’s funny because it’s true. (Score: 6.5 out of 10)

Kamala — A Kamala Harris Unity Sedar in honor of Passover. Martin Short comes out to play Kamala’s husband, Doug Emhoff. Ted Cruz drops by with some inappropriate food, and then Chloe Fineman stops by as Ella Emhoff. I feel like this was probably supposed to be the cold open, but they nixed it because it’s not funny. Biden’s aggressive dog stops by, and so does Cecily Strong’s Marjorie Taylor Green, but it doesn’t save it. “On behalf of all the Jewish people watching tonight,” my son says, “thanks for the weird sketch. Give it a 3.5.” (Watch Here) (Score: 3.5 out of 10)

Barfly Awards — Cecily Strong again illustrates just how good she is at playing drunk characters, as a succession of shitfaced characters hand out awards for drunken-related incidents. This one is OK, but it feels really long. Gonna make this one the Mat sketch of the night, (Score: 5.5 out of 10)

The Maya-ing — Pretty weird but not bad parody of The Shining, where cast members return as hosts and can see the ghosts of SNL. Tina Fey and Rachel Dratch stop by. (Score: 6 out of 10)

← The Enduring Appeal of '27 Dresses' | 'The Falcon And The Winter Soldier' Recap, 'The Star-Spangled Man' →