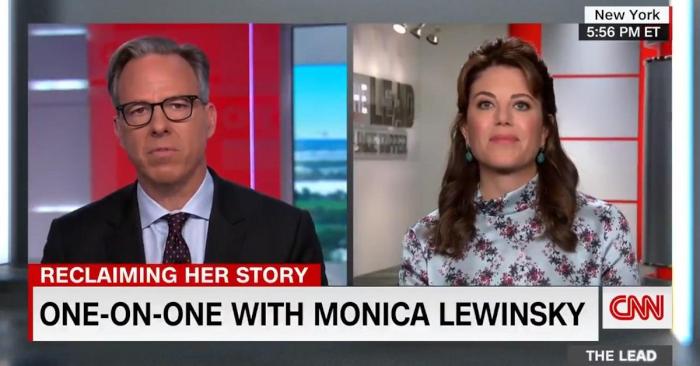 I had no idea before the opening scene of last night’s Impeachment: American Crime Story that Monica Lewinsky had once gone on a date with CNN’s Jake Tapper back in the day, weeks before her affair with the President had gone public. The ambitious Tapper even wrote about that date for The Washington City Paper because, as he admitted himself in the article, “I want a piece of this story just like everybody else.” It wasn’t a particularly noteworthy date and is included in Impeachment only for gossipy purposes. The piece itself is cringeworthy, and the way he describes Lewinsky at various times (“zaftig,” “plump”) is straight-up embarrassing. It is worth noting, however, that Tapper’s piece was one of the very few sympathetic to Lewinsky at a time when the media (and the Clintons) was otherwise raking her over the coals. There was not a second date (and probably would not have been, Tapper noted, even if the scandal had not broken).

The two mentioned the date during an interview on Tapper’s show last night.

As for the rest of the episode? It is much better, relative to last week’s excruciating, insufferable, wheel-spinning episode. It covers the time around Christmas 1997 when the case against Clinton begins to fall into place. It also covers the phone call in which Linda Tripp talked Monica Lewinsky out of cleaning and wearing her blue, semen-stained dress because, as Tripp explains to Lewinsky over the phone, it makes her look fat. Linda Tripp is the absolute worst.

During a holiday party at Tripp’s place, a terrified Lewinsky also approaches her about the subpoena she had received to appear as a witness in the Paula Jones case. In not so many words, Bill Clinton and Vernon Jordan direct Lewinsky to deny the affair, and that is her plan, but she needs to get Linda Tripp on board. Tripp, however, insists on seeing her lawyer, and in doing so, brings the tapes she had recorded of her phone conversations with Lewinsky. Her lawyer lets her know that it is illegal to record a phone call without the other person’s consent in Maryland, which means if the tapes get out, Tripp could be facing real jail time.

With the aid of Lucianne Goldberg, Tripp goes on the defense and seeks out immunity. To gain it, she has to wear a wire for the FBI — at the behest of the Ken Starr investigation — and convince Lewinsky to admit over lunch that she is going to lie about the affair under oath and that Vernon Jordan had convinced her to do so by offering her a job at Revlon (i.e., there is quid pro quo). Lewinsky does exactly that, walking straight into Ken Starr’s trap.

Meanwhile, Paula Jones starts to realize Susan Carpenter and her legal team may not be looking out for her best interests. Jones’ mother questions why Paula doesn’t accept the huge settlement offer, and Carpenter — who is playing a much bigger game — insists that it’s meaningless without an apology. After Clinton’s attorney Bob Bennett slut shames Paula during a deposition — asking her how many penises she has seen, accusing her of having oral sex with multiple men on the same night — Jones begins to wonder if her mother is right (Jones ultimately settled the case the following year for $850,000 and no apology).

Juanita Broaddrick also makes a brief appearance when Starr’s team attempts to get her to confess that Clinton had assaulted her. Broaddrick declines to do so (insisting on talking to her lawyer), but she does concede that anything Paula Jones might have to say is true.

In next week’s episode, the case for impeachment comes together.


← Review: 'There's Someone Inside Your House' Asks if Being Canceled is a Fate Worse Than Death | 5 Shows After Dark: 'Riverdale' Fifth season finale, 'Archer' 12 season finale →