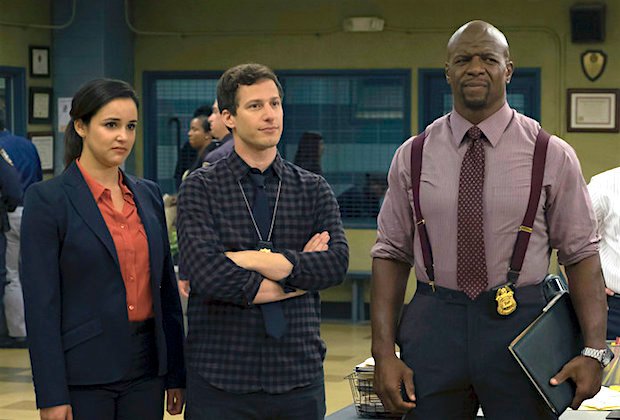 All Good Things Come to an End. Sadly, 'Brooklyn Nine-Nine' Is No Exception

Brooklyn Nine-Nine will end after its next season, which will be only 10 episodes, and will not air until the 2021-2022 season.

I’ll let that sink in for a moment, and then we’ll move on to why.

Apparently, NBC had already set its midseason slate (which included, alas, Manifest), and rather than bury the final season in August, the network decided it wanted to give the long-running Mike Schur/Dan Goor sitcom a proper send-off after the Olympics, with the appropriate amount of Olympics promotion.

We also know that the sitcom had tossed its first four scripts in the wake of George Floyd’s death and we’re mapping out different ways to approach the season and tackle the issue of police brutality. It’s unclear how much that, the pandemic, Terry Crews being a handful, or the ratings played into the decision.

The series is expected to begin shooting that final season in the coming weeks. The final 10 episodes will be the shortest episode order ever for the sitcom, which was canceled by Fox two years ago before being picked up by NBC.

With the end of Brooklyn Nine-Nine approaching and Superstore ending this year after six seasons, that somehow means that Zoey’s Extraordinary Playlist — assuming it is renewed for a third season — will become the longest-running scripted comedy on NBC (that show, by the way, delivered a hell of an episode this week).

“I’m so thankful to NBC and Universal Television for allowing us to give these characters and our fans the ending they deserve. When [co-creator] Mike Schur and I first pitched the pilot episode to Andy, he said, ‘I’m in, but I think the only way to tell this story is over exactly 153 episodes,’ which was crazy because that was exactly the number Mike and I had envisioned.

“I feel incredibly lucky to have worked with this amazing cast and crew for eight seasons. They are not only among the most talented people in the business, they are all good human beings who have become a family. But most of all, I feel lucky that we have had the best fans in the world. Fans who literally saved us from cancellation. Fans who fill us with joy. Ending the show was a difficult decision, but ultimately, we felt it was the best way to honor the characters, the story and our viewers. I know some people will be disappointed it’s ending so soon, but honestly, I’m grateful it lasted this long. Title of my sex tape.”