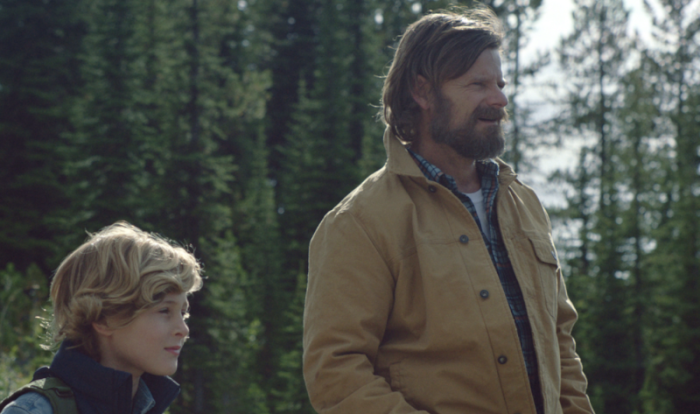 With a goofy grin and gleeful gameness, Steve Zahn has crafted a niche as a lovable sidekick. Now with Cowboys, that contextual expectation makes him perfectly cast as a Montana dad trying his damndest to do right by his son, who has just come out as trans.

Written and directed by Anna Kerrigan, Cowboys splits focus between a family divided. Sally Johnson (Jillian Bell) is the kind of mom who craves a perfect family photo and relishes that her child looks just like her. “You’ve always loved dolls,” her brother chortles as Sally fusses over Joe’s long blonde hair and twinsies dress. But 11-year-old Joe (Sasha Knight) looks absolutely miserable, a frown hanging so heavy it might tip the poor kid over. Meanwhile, Troy Johnson is a happy-go-lucky family man, who lusts for his wife and is ever-ready to cheer up his beloved child, be it with a joke or another bedtime story about cowboys. So, when Joe declares that he is not a girl—or a tomboy—but a boy, it’s his dad that he trusts first.

Sally rejects Joe’s truth, deciding that this is more about gender roles than identity. After all, she snarls at Troy, she’s the one who has to take care of the house and enforce the rules, while he gets to goof about and spin yarns about cowboys. “Who would choose to be a girl?” Sally howls. From the next room, Joe listens and whimpers. The family is heading for a fracture, and he feels to blame. Yet this is not where Cowboys begins. It begins—in media res—on the range.

The opening of Cowboys reveals Troy and his short-haired son on the run, astride a stolen horse, headed through the wilderness to the Canadian border. At first, this is a wonderful adventure, just like those stories that Joe loves so well. They ride. They fish. They eat canned beans and fart freely! Meanwhile, Sally has gone to the press, deadnaming Joe and calling a police chief (Ann Dowd) in to find him. Amber alerts are sent out, so Troy knows any stranger in the woods could be a threat to the future he wants to give his son.

Kerrigan’s script slides back and forth the Johnson family’s timeline, creating a sharp contrast between Joe before and after his coming out. Before, he was a sulking kid, who’s body radiated with so much anger that it was a family joke. Scenes of Troy encouraging Joe into a plaid shirt worthy of Paul Newman give way to a trembling smile. Sequences in the wild show a boy exuberant, singing silly songs and relishing the male bonding that he’d only been able to observe from a distance before. With an intense stare and a grounded performance, Knight strides confidently through this arc. Yet it’s Zahn who steals the show.

Troy knows he’s a screw-up. He scrambles for jobs. He disappoints his wife in the way of bumbling husbands. He gets tossed in jail. But he refuses to screw up when it comes to his kid. Troy may be an uneducated goof from rural middle America, but it doesn’t take a college degree or coastal liberalism for him to hear his son. In the coming-out scene, Zahn’s countenance quakes in confusion, but his eyes burn unrelentingly with love. With an earnest voice, he advocates for Joe to Sally. With a frenzied passion, he fights for Joe when the boy is mocked. With all he has—including dad jokes—he’ll carry that boy to a better tomorrow.

Knight grounds the film’s pathos, offering a poignant portrait of a child given the chance to grow into who they truly are. Zahn is the film’s pounding heart. He plays Troy like the tirelessly supportive sidekick that young Joe deserves. We follow him into the wilderness, dreamers hoping for a new horizon and a sun setting on a happy ending. We take comfort in his joyful voice, which spills out of his mouth like colorful marbles. Yet we notice the terror creeping into his tone and the glint in his eyes as Troy fears he’s made a terrible misstep in this mission. As Joe will holler in exasperation: What is the plan? What can they do once they cross the border? Are they on the run forever?

These questions ratchet up the suspense as Cowboys charges into a tense climax. Watching this final act, I wondered if the film would go the route of Hunt For the Wilderpeople, Logan, or A Perfect World? For those who can’t take any more heartbreak right now, fret not. Cowboys opts for aspirational over agonizing, delivering a denouement that is studded with pain yet thankfully cathartic.

All in all, Cowboys is a tender father-and-son tale alive with love, joy, and a wondrous sprinkling of Zahn-niess.

Cowboys opens in virtual cinemas and on VOD on February 12.

← Meghan Markle Wins Court Battle Against the 'Mail on Sunday' | All Good Things Come to an End. Sadly, 'Brooklyn Nine-Nine' Is No Exception →