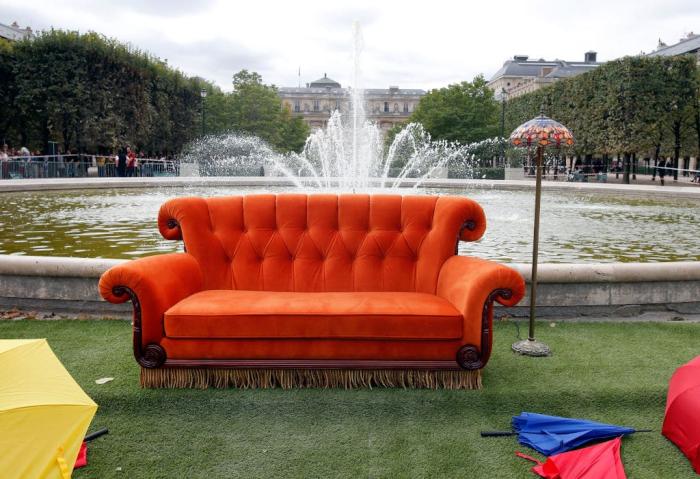 That great icon of ’90s American network sitcoms has already left a cultural footprint that will ensure its reputation for decades to come. Other comedies may have been funnier or age better in the ensuing decades, but none of them have stuck around in the wider consciousness quite like that story of six white New Yorkers and their favorite coffee shop couch. The series wrapped up in 2004 after ten seasons and 236 episodes but it never really went away. How could it entirely disappear when it was syndicated on seemingly every channel? There was a point in my early 20s where I swear I could turn on any random channel and it would be showing a Friends marathon (or one of the many Law and Order shows.)

Friends was very much a creation of Generation X but it was easy to see why millennials latched onto it too. It was just adult enough to make young teens feel sophisticated, the jokes were accessible and there’s a comforting simplicity to this version of New York City where paying the rent on your fabulously spacy apartment is never a problem and your high-paying upper-middle-class job will allow you limitless time off for coffee and personal problems. During a time of plenty, Friends was par for the course; now, it’s almost fantastical. So really, it shouldn’t shock us to hear that Generation Z, the current youth of the world, f*cking LOVE Friends.

Much has been made about how Warner Bros. made total bank from licensing Friends to Netflix as a streaming exclusive and how genuinely outraged some fans seemed when its removal was announced. A show that ended before many of these kids were even born — oh my god the ravages of time spare nobody — is their go-to binge watch. They may be rejecting many of the old models of entertainment consumption, but this is one ‘retro’ throwback they’re embracing. They also, as has been reported many times, love The Office, another NBC sitcom with surprisingly wide reach across major demographics. The show has oddly become a Gen Z symbol, particularly after singer Billie Eilish sampled it in one of her songs.

It’s hard to pin down the formula at play here but there are obvious markers for retro Gen Z success: Accessibility; plenty of episodes for binge-watching freedom; quotable one-liners everyone will recognize; and a certain strain of earnestness. In a time where pop culture feels so fleeting, where shows get all the buzz then are quickly canceled to the point where most people don’t even know they ever existed, this is how younger generations consume entertainment, for better or worse. It’s comfort.

With that in mind, it got me wondering what shows I would love to see get a streaming resurgence through these younger viewers. Is there something that would tap into their hunger that deserves the shine of such a revival? I have a few ideas — I tried to focus on shows I think would genuinely click with that crowd and not just my favorite stuff — but make sure to share your own suggestions in the comments below.

I must admit that I wonder if Daria would be considered too Gen X in her smug nihilism for younger viewers, especially the current generation who rejected that era’s apathy in favor of extreme earnestness. Then I remembered that every generation needs its smart girl loner heroine and that there would be a real interest in seeing the eponymous protagonist’s quiet evolution into someone who gives a sh*t. The Daria of 2019 would be a lot less sarcastic, I imagine, but the time capsule of MTV’s animated series still comes with top-notch jokes and a strength of character that endures in one’s mind. The show is being revived with a greater focus on Jodie as well as Daria herself, so there is an opportunity for Gen Z discovery, but those five seasons and two movies definitely deserve a little more shine.

I’m legitimately surprised we haven’t seen more love for Frasier in recent years. Has Kelsey Grammar really spoiled all the fun for us? Some of the later seasons are straight-up not good but those first four made me laugh harder than any other show that wasn’t prime era The Simpsons. For a show that was proudly intellectual and snobby in its approach, it’s impeccably crafted and easy to get into, even if you don’t quite understand every reference. Crucially, the glut of the jokes are aimed at Niles and Fraser’s elitism, which would fit in well with the current generation’s focus.

There’s been a lot of talk about NewsRadio on my Twitter feed recently and I’m not sure why. It’s one of those shows that never really got its moment while it was airing, overshadowed by bigger NBC sitcom hits, but still managed to accrue a dedicated fanbase who remember it fondly. Perhaps a show set at an AM news radio station would feel a tad too retro for the current generation but in terms of sheer joke density and quotability, you really can’t beat NewsRadio (‘I try to be good hard working man, but refridgamator so messy, so so messy.’) It’s also the perfect gateway into a whole world of sitcoms, plus it gets super squirrely in the later seasons. But you do need to get over the whole presence of Joe Rogan. Sorry about that.

Okay, I’m not even a big fan of Community but how is this show not the pop culture messiah for Gen Z? It’s kind of perfect for that demographic, from the pop culture references to the endlessly quotable scripts to the array of characters to its genuine heart. It would be like receiving the Rosetta Stone to the entire history of TV and geek culture. A lot of the show feels like you’ve entered an exclusive club but not necessarily in an off-putting manner. Rather, the charm of Community was always in how breathlessly enthusiastic it seemed to welcome its small number of viewers into the treehouse for fun and games. There’s something about the no-holds-barred anarchy of Community I think younger viewers would dig.

← The Best of Reddit's 'Animals Being Bros' Subreddit | Is Jonah Hill Playing Riddler or Penguin in 'The Batman'? →