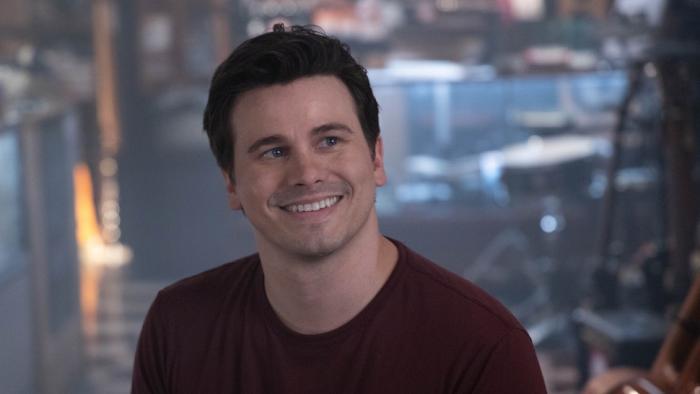 In the season’s third episode, A Million Little Things does all it can to push off the reveal of Eric’s identity for one. more. week. After Maggie spots her mom, Patricia, ruffling the hair of what she believes to be her “boy toy” in last week’s episode, Maggie pays a visit to Patricia in Maggie’s old apartment. She walks in and sees her mother crying before realizing that she’s on the phone with Eric. “I just wish everyone knew how sorry I am,” Patricia says into the phone. “I don’t regret knowing you, Eric, or what we have. What I regret is hurting people.”

To Maggie’s ears, all she hears is, “My mom is talking to the 35-year-old man that she left my father for,” and she storms out, vowing to remove herself from her mother’s life. However, by episode’s end, Patricia is knocking at Maggie and Gary’s door for brunch, and she’s brought a visitor. “What is he doing here?” Maggie asks, referring to Eric. “You didn’t tell her I was coming?” Eric asks.

That’s how the episode ends, right before we find out what the deal is with Eric. But I am not dissuaded from the theory I had last week, that Eric is the boyfriend of Chad, Maggie’s brother who died in a car accident when he was 17. Scenes from next week’s episode only bolster the theory. “There’s something you need to know about the night Chad died,” Patricia says to Maggie, with Eric looking on. Eric was involved, I believe. He may have been with Chad. I think that Patricia, since connecting with Eric, has treated him as a sort of surrogate son.

Meanwhile, in the midst of Maggie’s drama with Patricia, Maggie pokes the bear on Gary’s relationship with his mother, Alice, who walked out of Gary’s birthday party when he was nine and never returned. Gary blows it off, but we also see that Gary periodically calls his mother’s phone and hangs up after hearing her voice. That’s definitely a seed for a future storyline.

Gary’s also instrumental in Danny’s storyline. Danny has had a callback for the middle-school production of Grease, but he’s afraid to go because 1) he doesn’t want anyone to think he’s gay (straight people audition for school plays, too, Danny!) and 2) the boy he had a crush on last year is up for the same role. Gary ultimately encourages Danny to audition, and while his ex gets the part they auditioned for, Danny ends up in the lead role of Danny Zuko. Good for him. Also, I don’t really care about the kids on this show.

Delilah, meanwhile, goes on a not-date with Andrew, and the two both realize that they’re not ready to date. (Andrew, by the way, is played by James Tupper. Every time I see him I think, “Knock-off Jamie Lannister,” but the place where nobody can remember where they know him from is actually Big Little Lies. He plays Zoë Kravitz’s husband). Andrew is also still gently trying to encourage Regina to make some changes to her restaurant to ensure it is successful, but Regina continues to push back. The series draws an uncomfortable parallel between Andrew’s attempts to change the restaurant’s menu to the sexual abuse Regina suffered as a teenager. It’s about control, or more precisely, the lack thereof, and Regina vows to assert more of it over her restaurant and reveal herself as a major donor to a battered women’s shelter, refusing to remain anonymous.

Likewise, Rome — after being asked to make changes to his script by Turtle from Entourage — decides to ignore Turtle’s suggestions and make one tweak, “Based on a true story.” Turtle from Entourage wants him to remove the suicide, but Rome believes that “Based on a true story” will protect him from needing to make that change, which suggests that this show doesn’t know how Hollywood works. Likewise, Rome decides to direct a commercial so that he can earn enough money to help Regina remove Andrew as an investor in her restaurant. Rome also decides to conspire with PJ to find out if John is PJ’s real father. PJ takes some hairs off of John’s Harvard sweater and sends them to a lab to find out whether they are a genetic match. (Obligatory: CORAL!)

Elsewhere, Theo arranges for himself a sleepover so that Katherine and Eddie have some time together, and the two (adorably) make inroads back to each other over a game of pool, although as Katherine notes to Eddie, “There’s going to be a lot of mixed signals” in their future. Scenes from next week’s episode suggest some more turmoil, as Katherine will meet the child that Eddie fathered with Delilah (and Eddie will express an interest in helping to raise the baby).