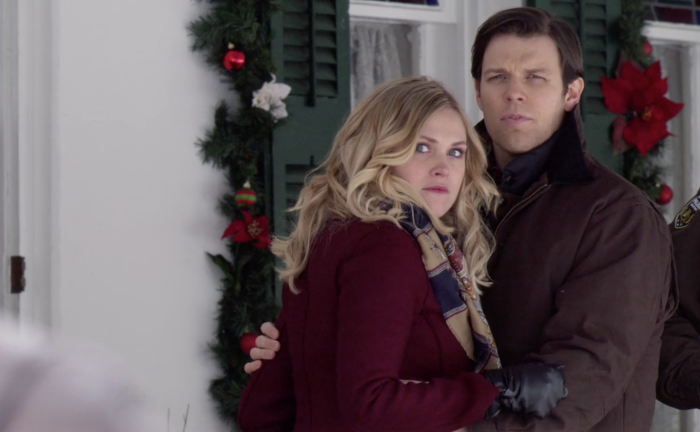 The amount of holiday movies that come out each year has become overwhelming. Between Hallmark, Lifetime, Netflix, and Hulu (to an extent), the increased production is getting to be a LOT. I still watch a lot of the holiday films and TV shows made, though — this year it was Jingle Jangle, Christmas on the Square, The Christmas House and quite a few more. Considering how stressful this year has been, the saccharine, overly manufactured holiday pickings have brought me some comfort, be it by leaving me with a smile or an eyeroll intense enough for a headache. That said, there’s so much wrong with holiday films, and if you’ve seen enough of them like I have, you start to pick up on things.

The lead actors lack chemistry — This is a HUGE problem for most every holiday film. I love the schmoop and it’s often comforting to know that the movie will end with a happy ending. But, if 99% of holiday films are banking on two people falling in love over a short period of time because the magic of Christmas deems it so, then they HAVE to have chemistry for it to be believable. Where is the spark? Where is the PINING? I’m reminded of Christmas Wedding Planner (an atrocious film, please don’t watch it) where the leads were supposed to have this flirty banter, but the guy was so condescending and she was trying too hard to be cute. Together, they were a mess with no charisma or viability as a couple. This movie is an exception because both actors were bad, but in other instances the actress at least tries. It’s the actors who rarely reciprocate in the way they should. The lack of charm and wooden performances affect the whole romance. One kiss, no sex, no problem. BUT GIVE US SEXY HAND-HOLDING.

The film really doesn’t have to be set in a small town — Holiday movies will have us believe that small-town life is better, more family-oriented, and encompasses the true spirit of Christmas (whatever that actually means). Those of us who live in cities are therefore cold inside and can’t learn any lessons about love or life unless we move to a small town to get that first-hand experience. Obviously, that’s a very narrow and unimaginative way of looking at anything holiday-related. Dash & Lily was a great example of how Christmas, love, and life could intersect in a place like New York. In fact, the hustle and bustle of city life accentuated the richness of the season rather than diminishing it. Christmas Inheritance, Rocky Mountain Christmas, and so many scoff at city life (not always directly, but the implication is definitely there). Christmas in the Smokies went so far as to stereotype agents as controlling, evil, and money-hungry so that the small-town life could look more appealing. Point is, it’s okay for holiday films to exist outside of small towns. City life won’t bite, I promise.

They’re too white — Midnight at the Magnolia (a holiday film that followed best-friends-to-lovers trope and was actually quite good) is set in Chicago and I had a hard time believing that. Most, if not all, of the background actors were white. In Chicago. CHICAGO. How does that even make sense? Holiday films are not very diverse in general and, while that is starting to change, it’s not changing fast enough. For Lifetime, it’s giving audiences the first LGBTQ+ holiday film. That’s great, but it’s also two white gay guys. For Hallmark, the gay couple wasn’t even the leading love story in The Christmas House and they, too, were also white. Christmas on the Square was also far too white for my liking. One of the only Black characters in the film played the best friend. How stereotypical. I’ve often wondered if the small-town staple of holiday films has been used as a way to avoid diversity, falling back on the stereotype that small towns are themselves mostly white (like period dramas have convinced us that POC didn’t exist in England, this is simply untrue).

Holiday films are way too bright — I’m not talking about the films being overly jolly, cheesy, or spirited. I’m talking about the lighting of a set. It’s like someone filmed all of these movies from inside a retail store. The overly illuminated atmosphere makes everyone look washed out and the brightness gives the actors’ picture-perfect teeth some competition. If these movies are so low-budget, why are all the lights even on?