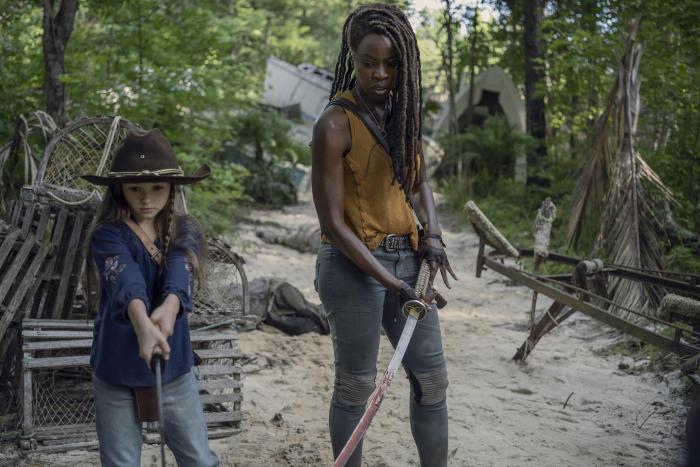 Previously on The Walking Dead: Carol and Daryl interrogate a Whisperer that they’ve taken into captivity in order to learn more about Alpha and the Whisperers, and also to find out where her horde of Walkers is located. Siddiq is still experiencing PTSD and is still sleepwalking as part of it, all while trying to find out what is causing the sickness that is affecting everyone at Alexandria and ends up being choked to death by Dante after realizing that Dante is actually one of the Whisperers acting as a spy on their behalf. Gamma and Aaron slowly become more comfortable in each other’s presence until Alpha steps in and reminds her who and what is at stake.

THE STORY SO FAR: After revealing his true face to Rosita, resulting in Rosita curb-stomping his ass like Caine did to Ilena’s cousin in Menace II Society, Dante is interrogated by Carol, Daryl, Gabriel, and Rosita on how and why he infiltrated their camp, as well as what he knows about Alpha and the Whisperers. Michonne, Judith, and Luke cross paths with a stranger named Virgil who claims he is trying to get back to his family on a naval base that is two days away and who may have supplies that can help take down Alpha for good. Gamma provides Aaron with information on where he and the rest of the gang can find Alpha’s horde, only to end up (thanks to Carol’s impatience and thirst for vengeance) in a dire situation that puts all of their lives in jeopardy and would make the late Admiral Ackbar shake his head in dismay.

WHAT’S GOOD ABOUT THIS EPISODE?: Rosita whooping Dante’s ass and keeping us from having to deal with several episodes of more manipulation by Dante before everyone else figures out the truth. The flashbacks revealing how he was chosen by Alpha and how he caused all sorts of mayhem, from tampering with the water supply to make everyone sick to smothering patients and killing them to make it seem as if they’re dying from the sickness going around. Gabriel channeling Tom Wilkinson at the end of In The Bedroom and making sure that Rosita and Coco are safe by stabbing the everloving shit out of Dante in his cell. Michonne and Judith kicking ass together as mother and daughter by taking down Walkers while also making sure that Virgil doesn’t get away so that he can provide some answers. Daryl calling out Carol for being reckless about herself and about everyone else because of her Roaring Rampage Of Revenge, while also reminding her that he’s there for her like always.

WHAT’S NOT SO GOOD ABOUT THIS EPISODE?: If you’re expecting much forward momentum to really push the war against the Whisperers forward (or if you’re expecting any game-changers like what happened last season, with the Whisperers finally revealing themselves by killing Jesus), you’re not really going to find it in this episode. Yes, some things do happen, but it still feels a bit like it’s spinning its wheels until it returns in February.

MICHONNE?: Yes, and after forcing Virgil to take her to the naval base where his family is staying, we start to see the seeds being planted on how Danai Gurira will be making her exit at season’s end.

CAROL?: Yes, and because she sees Alpha and because her desire to rip off her head and shit down her neck is quite strong, she ends up leading everyone into a cave where Alpha’s horde of Walkers are actually being kept, and where they all end up being trapped with those Walkers with no visible signs of escape.

IS DARYL STILL ALIVE? BECAUSE IF NOT, THEN WE’LL PROBABLY RIOT IF WE HAVE NOTHING BETTER TO DO: Yes, he is, and besides seeing him question Dante and trying to knock some damn sense into Carol, we see him reunite with Connie, which clearly puts a smile on both of their faces.

ARE THE WHISPERERS IN THIS EPISODE?: Surprisingly, the only Whisperers who makes an appearance are Alpha and Gamma.

DID YOU SEE THE TRAILER FOR THE NEWEST SPIN-OFF, THE WALKING DEAD: WORLD BEYOND: Yes, I did. The Black Helicopter makes an appearance there.

ARE YOU GOING TO RECAP THAT SHOW AS WELL?: I seriously doubt it. [Publisher’s Note: So there’s a chance?!]

TO SUM IT ALL UP: Not a bad episode, but as a midseason finale, it could’ve been better and given us more reason to care about everything that’s happening and to look forward to the eventual war against the Whisperers. Of course, this war is going to kick into high gear, and the sooner that we get to see how this is resolved (and how Negan will factor into it all) and not even think of stretching it all out into the next season, the better.

This episode of The Walking Dead has been brought to you by “Beyond The Sea” by Bobby Darin:

← The Snyder Cut Doesn't Exist, According to 'Justice League' Composer | Why Did The Rock, and Danny DeVito Crash a Wedding? (Hint: Tequila) →