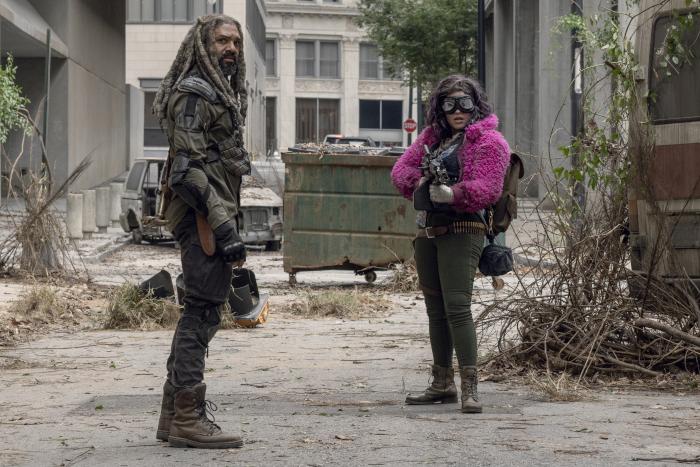 Previously on The Walking Dead: Despite the fact that Negan slit Alpha’s throat and cut off her head, Carol isn’t entirely happy with how long it took for him to do what she asked and get it done, so she’s not exactly in a rush to tell the people of Alexandria what he did on their behalf. Ezekiel, Eugene, and Yumiko head on out to meet up with Stephanie and her group, only to end up crossing paths with an incredibly upbeat, assault rifle-toting woman named Princess. Negan is held captive by Daryl, who doesn’t believe him when he says that Alpha is dead, and that he and Carol worked together to make that happen. Beta doesn’t respond very well to discovering Alpha’s severed head on a pike in their territory.

THE STORY SO FAR: Everyone has pulled up stakes and left Alexandria in order to take shelter in an abandoned hospital tower and plan their next move against Alpha Beta and the Whisperers, while Aaron and Alden followed them from a distance to make sure they would leave Alexandria and head to Oceanside instead. Ezekiel, Yumiko, and Eugene introduce themselves to Princess, who makes their lives just a little more difficult as they attempt to rendezvous with Stephanie and her people.

WHAT’S GOOD ABOUT THIS EPISODE?: Paola Lázaro’s performance as Princess, as she made it very clear that her abilities at interacting with other people were in need of much work, especially after she led Ezekiel, Yumiko, and Eugene into a minefield just so she could take the scenic route and spend more time with them, but also made clear that her social skills were an issue for her before the Walker Apocalypse and which made her all the more appreciative of their forgiveness and willingness to bring her with them. (Bonus points to her explanation that she’d rather nickname herself “Princess” instead of “Queen” as the latter sounds old and pretentious, and formerly-known-as-King Ezekiel quietly absorbing that) Negan trying to convince Lydia to lash out at him for what he did to Alpha and to embrace her anger and her grief. Daryl’s conversation with Judith after she became upset at him killing a Whisperer and leaving her corpse in the woods, which clearly reminded her of Rick. This look and reaction from Beta to another Whisperer who makes the mistake of referring to him as Alpha.

WHAT’S NOT SO GOOD ABOUT THIS EPISODE?: I’m not sure what exactly was the point of leading Beta and the Whisperers to Oceanside, and why Aaron and Alden had to follow them to make sure that they go there (only to end up getting spotted and captured by the Whisperers as a result), but I’m sure the season finale will do a good job of explaining that decision, if and when it ever airs. And sorry, Beta, it was more you kidnapping Aaron and Alden that led you to the hospital tower instead of faaaaaaaaaith faith, but considering that he is now hearing Alpha’s voice in his head telling him what to do, I can’t really expect him to be all that logical.

CAROL?: Yes, and she’s accompanied on a mission to look for spare parts with Kelly, who tells Carol that she still believes that Connie is alive and to not let the bad things that happen to her make her push other people away. And who is also proud of the fact that all of her friends are learning American Sign Language in order to better communicate with her.

MAGGIE?: No, but judging from this preview, she’s finally going to bless our screens once again with her presence.

DOES THE BLACK HELICOPTER MAKE AN APPEARANCE?: No, but it does appear in this preview for The Walking Dead: World Beyond.

ARE THE WHISPERERS IN THIS EPISODE?: They certainly are.

TO SUM IT ALL UP: For an episode that had to act as the season finale due to circumstances far beyond the control of showrunner Angela Kang and the rest of her crew, this was a mostly satisfying episode. I have no idea when the actual season finale will appear on our television screens, but here’s hoping that when it does, we will no longer need any further public service announcements from Samuel L. Jackson telling us all to stay the f—k at home.

But for far too many of us (and for far too many people that we know) whose lives have been affected by this pandemic, there is some small comfort to be found in Daryl’s words to Judith as he reminded her that there are still people who love and care about her:

“Nothing can take the place of someone you love being gone. But that doesn’t mean that everything that follows is gonna break your heart.”

This episode of The Walking Dead has been brought to you by “Faith” by the late, great George Michael:

And by “Lean On Me” by the late, great Bill Withers, who passed away last Monday:

← All This Social Distancing Is Killing Gwyneth Paltrow's Sex Life, You Guys | 'Westworld' Season 3, Ep 4: What Is Victorville, Anyway? →