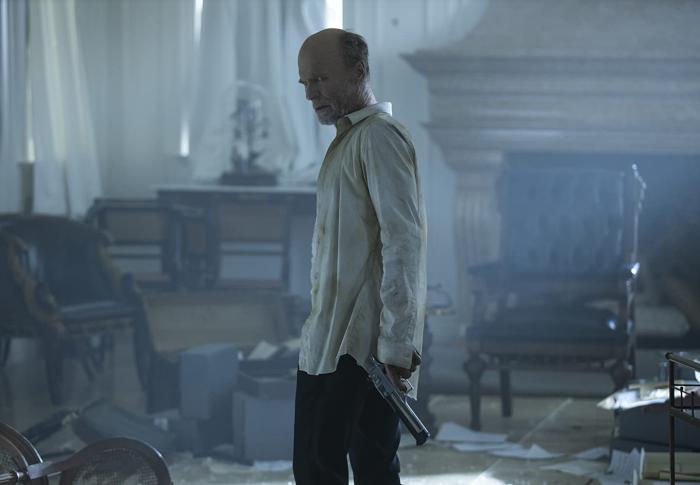 'Westworld': Welcome To The End Of The Game

Hey! Remember how last week I was all like, “Yo I bet William, a.k.a. The Man In Black, is the personality inside Charlotte, but maybe it’s Teddy or like literally anyone else, who knows?” Ah, memories. Fun times.

Anyway, we got the answer to that question in last night’s episode, and it sure is A CHOICE: Charlotte is f*cking Dolores. In fact, there’s a very high probability that all the pearls Dolores smuggled out of West World were copies of herself, save the one that’s a Bernard/Arnold hybrid. For those of you of you keeping track, that means that Dolores is Dolores, and Charlotte is Dolores, and hot-ass Incite fixer Connells is Dolores, and MUSASHI IS DOLORES TOO (Hiroyuki Sanada returned last night, because apparently Dolores needed to take over the Yakuza and to do so she made a copy of our favorite ronin). There is still one last unaccounted-for pearl missing from the action, which means there’s the possibility that Dolores did bring out some other Host personality with her, I suppose. And like, I could see Westworld doing that — following up the “F*ck you, they’re all Dolores” reveal with a “F*ck you, they’re all Dolores EXCEPT for this one surprise Host that’s Teddy/Maeve’s Daughter/Maeve herself, etc.” twist, but that might be reading too much into things. After all, this is supposed to be the more straight-forward, obvious season!

Speaking of how not-at-all confusing this show is, let’s talk about William — who, again, is not Charlotte. He’s alive, and probably (?) human still, and slowly losing his grip on reality while repeatedly assuring himself that he totally knows what’s real. Honestly, his storyline this week wasted a lot of time treading familiar water — he feels guilty about driving his wife to suicide and gunning down his own daughter in cold blood, and if he’s human then it’s all his fault but if he’s actually a Host then he’s a blameless slave to his programming, blah blah blah — only to lead up to that big “Charlotte is Dolores” reveal. The real reason the show dwelt on his mental state was because Dolores-as-Charlotte was maneuvering to have him committed to an insane asylum, and in doing so take control of his majority stake in Delos (because everybody loves hostile corporate takeovers, y’all!), though there’s still something fishy going on that hasn’t been resolved. For most of the episode, it seemed like William was hallucinating his daughter Gremily (Katja Herbers) as a personification of his guilt or something… until Dolores-as-Charlotte reveals that she could hear Gremily too! Then, when William is about to be carted off to the asylum, Dolores-as-Charlotte pricks his neck — either injecting him with something, or taking a sample of his blood. So: Is William real? Dolores sure isn’t saying.

Maeve continues to spend time with Engerraund Serac, who reveals a bit more about his fears and desires. Though Dolores is waging a war against humanity, that isn’t really Serac’s game. He too thinks humans are the enemy — specifically, “Humanity’s biggest threat has always been itself.” He’s trying to save humans, not from the coming Host overlords but from themselves. That’s what Rehoboam, Incite’s supercomputer, is all about: mapping and predicting the future disasters of humanity based on their own behavior. The kicker is that Delos, in mapping the human mind (the project in Sector 16), has gone a step further than he did — and that’s the data he’s wants to complete his own life’s work. According to Serac, Dolores has the encryption keys for that data, as well as the Host Heaven data — and if Maeve works with him, they can both achieve the futures they desire. That is, assuming Maeve’s goal is to be reunited with her daughter in the beyond. For now, at least, Maeve seems willing to play Serac’s game. She sets out to track Dolores, following the path of the people Dolores used to set up her new identity. This eventually leads her to Sato, the head of Yakuza who supposedly helped Dolores smuggle her compatriots out of Singapore — who, of course, is actually Dolores-as-Musashi. The big takeaways here are that Maeve is still in possession of her Neo-level technowizard powers, Dolores-as-Musashi is doing something involving the Delos white Host goop (making new bodies?!), and sword fights still kick ass. Although Dolores-as-Musashi wins the day, I’m sure Maeve can be repaired. It’s only, like, a really big stab wound. She’s survived worse.

Finally, there’s the dynamic duo of Bernard and Stubbs, who have washed ashore in the scenic town of… Victorville, CA. Why Victorville? Why not Los Angeles, which is actually on the coast, rather than a tiny town well inland from it? Well, I consulted my yarn wall (a.k.a. Wikipedia) and it turns out that in 2007 Victorville hosted the DARPA Urban Challenge — which is a thing where driverless robot cars compete for project funding from the Department of Defense. Which makes it all the more amusing that Bernard’s big scheme to get close to Liam Dempsey is to have Stubbs pose as his driver, despite the fact that every rich person we’ve seen on this show has ridden around in autonomous robovehicles.

Meanwhile, Dolores and Cal partner up to steal all of her ex-boy toy’s money, and the plot converges at a fancy party where rich people choose between wearing white or black masks then bid on naked people. Subtle, show. Real subtle. Dolores plans to abduct Liam, with the help of Dolores-as-Connells, only Bernard and Stubbs beat her to the punch. Well, until Dolores punches Stubbs right off a balcony. Farewell, Lesser Hemsworth, it was nice while it lasted. Bernard believed that Dolores had killed and replaced Liam himself, only to discover too late that Connells is the secret Host.

So… what now? Dolores has Liam, Maeve is bleeding out, and Bernard may or may not be in trouble. Oh, and William is in an institution, having more hallucinations of Dolores. But more importantly: Will Charlotte save Delos from the hostile corporate takeover?! Excuse me while I anxiously bite my nails!

— If Charlotte is still Dolores, then why did Dolores have to build another Charlotte body? Did we all misinterpret that scene last week, from Arthur’s home lab, or is there some subtle difference between the main Dolores pearl and the copies?

— For that matter, does ANY of last week’s Charlotte episode make sense in light of this new information? Like, Dolores comforted Charlotte by saying “You belong to me” when really she should have just said… “You’re me.” Is the presence of Charlotte’s son the thing making that copy unstable, or are Connells and Musashi also suffering identity crises?

— Y’all, I’m starting to think Dolores is the bad guy. Building an army of yourself is literally what the Master does on Doctor Who.

— At the end of the episode, Dolores (in her old West World garb) cryptically tells William, “Welcome to the end of the game.” Is that a hint that this is going to be the show’s final season?

— Notice how Bernard has built a Host kill switch, and we know Serac has one that works on at least Maeve. Gotta love magic buttons!

— Did anyone else think for a hot second that the big reveal would be that at least one of the hosts was actually Robert Ford?

— Seriously, Hiroyuki Sanada f*cks so hard. Seeing him again was the best reveal of the night.

← 'The Walking Dead' Sort-Of-But-Not-Really-A-Season Finale Recap, 'The Tower' | It's Story Time from Leslie Jordan, The Man Who Once Shared a Jail Cell with Robert Downey, Jr. →