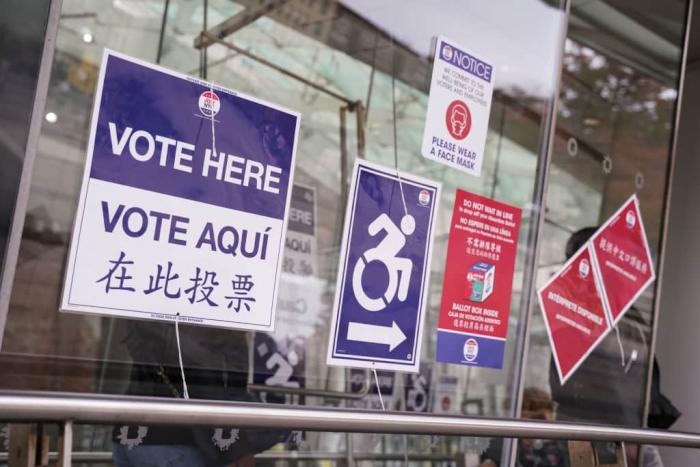 With One Week Until Election Day, the Political Climate Is Dicey

We are one week away from Election Day. According to CNN early voting numbers are outpacing those from the 2018 mid-terms with more than 21.4 million ballots having been cast in 46 states. I like that. Let’s keep that going, America. The more people who participate, the closer we get to an actual democracy.

Meanwhile, in some of the most closely watched states, a certain political party continues to make life difficult for all of the demographics who are not cis-het white dudes.

Last week in Florida, a joint committee of the Florida Board of Medicine and the Florida Board of Osteopathic Medicine signed off on a draft rule, pushed by Governor Ron DeSantis, that would restrict doctors in Florida from treating transgender patients under the age of 18. Denying them the use of puberty-blocking, hormone and hormone “antagonist” treatments. The plan would also ban the very rare cases of surgical treatment for minors. The only less-bad part of that news is that the proposal is “prospective,” meaning any kids already receiving hormone therapy or puberty blockers will be allowed to continue to do so. The final vote is this Friday.

A dark day for trans youth.

Florida Board of Medicine has just voted to ban gender-affirming care for all trans teenagers.

They cut the hearing early and told activists to "email them."

I cry for Florida's trans youth. This was a sham hearing with fake experts. pic.twitter.com/JORaHN4uFA

In Georgia on Sunday, there was a debate between Brian Kemp and Stacey Abrams. Kemp, when asked directly whether or not he would sign a more restrictive abortion bill, evaded the question completely by changing the topic to the economy. Ms. Abrams was having none of that. She noted that Kemp has shown support for the bounty system enacted by Texas lawmakers, allowing citizens to make $10,000 by reporting on people who may have had abortions. Kemp signed a “fetal heartbeat bill” back in 2019 that bans abortion after six weeks (which, again, is earlier than most women know they’re even pregnant). That law was triggered when the Supreme Court struck down federal abortion protections earlier this year. Abortion rights and women’s healthcare are not safe in Georgia if Kemp is re-elected. Come through for Stacey, Georgia voters!

Kari Lake, Arizona’s election-denying GOP candidate for Governor, was on Tucker Carlson’s show Monday night whining about how her candidacy is being targeted because she’s “speaking the truth.” In the next sentence, she went on to list a number of the right-wing’s favorite baseless conspiracy theories.

This clown, like all of her friends, loves to confuse criticism with restriction. No one’s saying you can’t talk about things. We are going to tell you you’re wrong though. And laugh at you.

This New York Times poll from last week shows Lake in a dead heat with Katie Hobbs. I know that you know that polls should be taken with a grain of salt the size of the Rock of Gibraltar but that’s not great Arizona.

At a campaign stop on Monday, Wisconsin Republican candidate for governor Tim Michels’ told his supporters “Republicans will never lose another election in Wisconsin after I’m elected governor.” Although he offered absolutely no details, I feel comfortable calling whatever it is fascism. I love Wisconsin, and all of its beautiful cheeses, too much to watch that happen. The current Democratic, governor Tony Evers has been using his veto power to fight against Republican election “reforms” and I hope he gets to keep fighting that good fight on behalf of all the Cheeseheads.

In what seems like another event in a worrying trend Richard Ringer, a Democrat running for a Pennsylvania House seat, reported that he was attacked in his own backyard early on Monday morning. This attack follows two previously reported incidents of vandalism at his home. The rise in partisan violence has become a talking point on the interview circuit and over the weekend Minnesota Rep. Tom Emmer Sunday was drawn into a debate about it on Face The Nation. I say “debate” but he really just got his hat handed to him by Margaret Brennan when he tried to both-sides the issue by complaining that no one blamed the Democrats when Congressman Steve Scalise was shot in 2017 by someone who had volunteered for Bernie Sanders’ presidential campaign the year before. Don’t blame half-crazed Bernie Bros on us, dude!

Finally, in more slightly depressing news, the Supreme Court on Monday heard two Affirmative Action cases. Both were brought before the court by the Students for Fair Admissions (SFFA), a group founded by conservative Ed Blum, who has been trying to destroy Affirmative Action for a long time. This time SFFA is trying to pit different minority communities against each other in their lawsuit against Harvard and UNC by saying that their Affirmative Action policies are discriminatory against AAPI applicants. I’m no lawyer and I haven’t even regularly watched Law & Order in years so my go-to guy on all things Supreme Court is Elie Mystal. He was quick to call shenanigans on the arguments in favor of ending Affirmative Action at both universities for various reasons.

If that sounds familiar, it should. It’s exactly the same rationale the conservatives used to expand gun rights, deny climate change, and authorize the states to force women to bring pregnancies to term against their will. These conservatives are unbound from any logical, political, or legal restraint. They will do what they want.

Doesn’t that just about sum it all up?