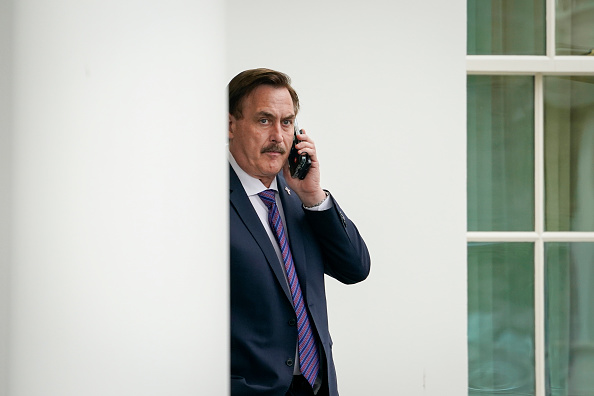 Who the Hell is Mike Lindell and What in God's Name is a MyPillow?

Until he got heavily involved in the effort to overturn the election, I had no idea who the hell Mike Lindell was, and the only thing I had ever known about MyPillow is that whenever there’s an advertising boycott on a Fox News show like Tucker Carlson, everybody abandoned them except for MyPillow. I had no idea, in fact, that there was so much money in pillows.

But Lindell — who is MAGA to his rotten core — has made a fortune on pillows, and from what I now understand, he’s the Trump of pillows. Lindell is a small businessman and former addict who found God and cleaned up his act in 2009. Around 2004, however, he started selling these pillows with a “patented design” in mall kiosks and fairs and the like. However, the pillow didn’t really take off until Lindell produced a half-hour infomercial in 2011, which airs something like 200 times a day in local and national markets. Since that time, Lindell has sold around 30 million pillows, which go for around $35 each.

The thing is, though, that MyPillow has also made a lot of false claims about its pillows, like that the pillow can treat symptoms of fibromyalgia, restless leg syndrome, sleep apnea, cerebral palsy, and acid reflux. MyPillow has had to pay settlements to resolve lawsuits over false advertising. Additionally, the Better Business Bureau gives the joint an F.

But, Lindell is an evangelical Trump supporter, and when a lot of other advertisers ditched Fox News, Lindell bought up more time (probably on the cheap) and cemented MyPillow as the pillow of MAGA. Lindell, as a result, is reportedly worth $300 million and is weighing his own political ambitions. Oh, and like Trump, he has also promoted a fake COVID-19 cure (here, an extract from the oleander plant).

However, his recent political activities — aligning himself with Sidney Powell and encouraging Trump to declare martial law, for instance — may put a dent in his fortune. He is currently facing a potential lawsuit from Dominion over false claims he’s made about their election software. While several other entities, including Fox News, have issued apologies, retractions, and corrections read by Lou Dobbs as though a gun were being held to his head, Lindell has not backed down, telling Axios, “I want Dominion to put up their lawsuit because we have 100% evidence that China and other countries used their machines to steal the election.”

A defamation lawsuit is a quick way to blow one’s $300 million fortune. Moreover, because of his association with Trump and the insurrection, Wayfair, Bed, Bath & Beyond, and Kohl’s have stopped selling MyPillows in their stores.

Wayfair, Kohl's & Bed Bath & Beyond have severed ties with #MyPillow CEO Mike Lindell because of his ties to President Trump including recent comments about a “stolen election,” and suggestions of martial law.” Details on @FOX9

Lindell — who gave discounts for his pillows for the promo code QANON — is not pleased.

From an interview earlier this evening, Mike Lindell tells Right Side Broadcasting that he was just told that @BedBathBeyond has dropped MyPillow. He also complains about @slpng_giants. pic.twitter.com/P4yGPlrPJc

Oh, and FYI: Consumer Reports says that MyPillows aren’t very good, and only 1/3 of MyPillow buyers say they would buy a MyPillow again. So, his product is sh*t, too.