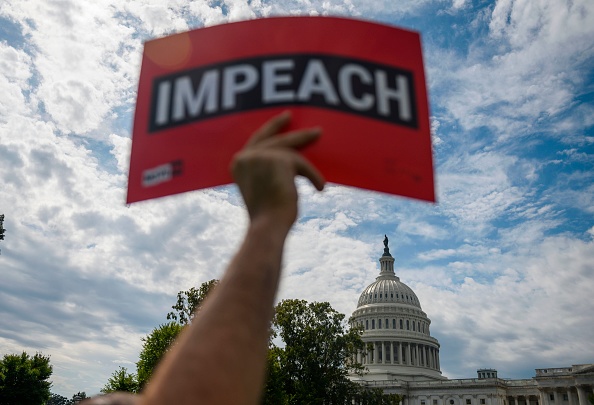 What 's the Point of a Second Impeachment Trial?

Yesterday, Senators Tim Kaine and Susan Collins sparked speculation that the Senate might take an off-ramp out of the impeachment process by voting to censure the former President. The call from the left was, “Don’t wimp out, Democrats!” while the call from the right was exactly the same as it was for impeachment: “You can’t censure an out-of-office President!” Senator John Cornyn from Texas even had the audacity — three weeks after an insurrection on the Capitol — to say that it was “time to move on.” This from a party that spent four years chanting, “Lock her up!” about a Presidential candidate who had all but retired.

That is literally what he will do again. Fifty-five to 58 Senators will vote to convict Joe Biden’s predecessor of inciting a riot against the Capitol, but that won’t be enough. He will be acquitted, and the former President will use that acquittal as evidence that he did not do what we all saw and heard him do.

It’s going to be a frustrating experience that will ultimately do little except distract from Biden’s early agenda and give us in the media more grist for the mill. And while historians might say that it’s important to follow through on the trial to let the record show that America held Trump accountable, I am of the opinion that, “He was the only President to be impeached twice” is a much darker stain on his legacy than, “He was the only President to be acquitted twice.”

The reality is, as we have seen, the impeachment process is a farce. No one has ever been convicted, and it’s unlikely that anyone ever will be. If blackmailing a foreign country for dirt on your opponent and inciting an insurrection on the Capitol is not enough grounds for impeachment, I don’t know what is. I’m not entirely suggesting that we skip the impeachment trial this time around, but I am wondering, “What is the point?” I’d love for him to be convicted, but it’s not going to happen.

Here are some things that can happen: We can make sure that Twitter and Facebook enforce the previous President’s lifetime bans. Without those platforms, he has very little power, and it will only wane the longer he is away.

But also, remember this: In order to avoid being convicted in his impeachment trial, the previous President did not pardon himself of any crimes, past or present. Of anything. It is time for DOJ, for the state of New York, and probably the state of Florida, too, to prosecute him both civilly and criminally for the financial crimes, the tax evasion, the corruption, or even for the very crimes for which Michael Cohen was imprisoned. Dominion Voting Systems, meanwhile, needs to add him to their lawsuits, and the FBI can and should arrest him for the same crimes in which the insurrectionists are being charged. Take away his platform. Take away his money. Put him in prison, and bury the prison on top of him.

All of these things will be far more satisfying than going through the motions of another impeachment trial in which the outcome is not only not in doubt but runs the risk of giving him a hollow moral victory that he will use to jumpstart his 2024 campaign. Democrats (and quite frankly, many Republicans) would love to be able to impeach the previous President just to keep him out of politics, but the best way to do that is not through a flawed process, but by making Harvey Weinstein his cellmate.