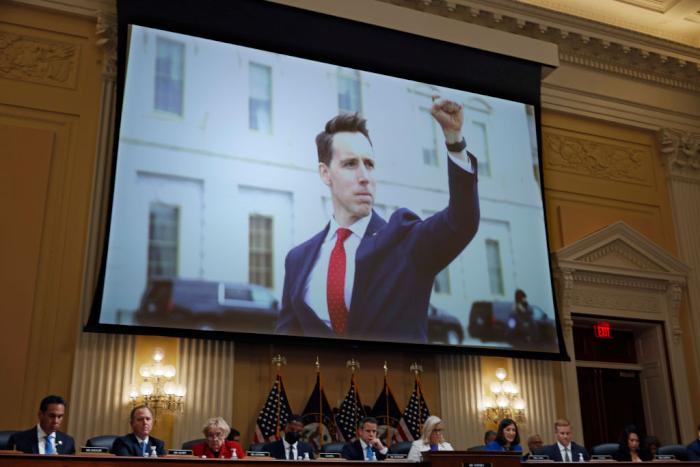 Watch Josh Hawley Run Like a Scared Rabbit on January 6

We deserve nice things. We don’t get many lately. Most cost money and time, and they’re more expensive than ever. But dammit, we deserve a moment of pleasure. And so the January 6 Committee yesterday released video of Republican Missouri Senator Josh Hawley scampering through the halls of Congress like a squirrel through a briar patch. You probably remember Hawley’s raised fist in support of the rioting insurrectionists the day of their little invasion. He’s always enjoyed being a political tough guy, trying to glower and pontificate his way into machismo. The Senatorial equivalent of Chris Pratt, if you will. That’ll be more difficult to pull off now that the public’s seen him run from the insurrectionists the way Johnny Depp runs from age-appropriate women.

That was pretty good. A flash of pleasure like the sun going behind a cloud on a hot day. But it gets better. First, there was the reaction of everyone in the hearing room when they saw the video for the first time.

Immediate reaction to the vid: pic.twitter.com/XAv4jc2tjr

Wouldn’t you just die? Imagine you’re Josh Hawley, flushed with some recent victory like Paul Ryan during a workout photo shoot. Maybe you successfully wrote your name without sticking your tongue out the corner of your mouth. Suddenly, your aide bursts in with a video of the entire hearing room laughing at you. I bet his stomach dropped all the way to the running shoes he should’ve worn to work last January for better traction. And then it gets worse because it’s on Twitter. Worse for him, I mean. For us, it’s like a surprise invitation to a pop-up comedy festival.

All the good music versions of this have been done and I can never leave anything up with music but here Josh Hawley running away to chicken rap pic.twitter.com/MKJISXtRtl

The internet remixed the video of Senator Josh Hawley running away from the mob on January 6th set to the Chariots of Fire theme. pic.twitter.com/9k4a4RFQ4l

Video of Josh Hawley running out of the Capitol. pic.twitter.com/meW5lY94HP

I appreciate that misogynistic language isn’t great, but former D.C. police officer Michael Fanone’s response to it is a personal favorite.

I talked to former D.C. police officer Michael Fanone outside the #Jan6thHearings.
Here is his response to seeing video of Sen. Josh Hawley running away from rioters after fist bumping them earlier in the day on Jan. 6 :

Hawley’s never faced any consequences apart from public contempt for his brazen support of election theft and violent insurrection. It’s unlikely he will. But videos and gifs of his flight to safety will haunt the rest of his political career. That can’t be great for a guy who wants to be President and can only get there with the support of his fellow wannabe tough guys, sitting in their truck driver seats making angry Facebook videos. I’ll give him credit, though. The man can bound like a deer. Bambi’s mom’s got nothing on him.