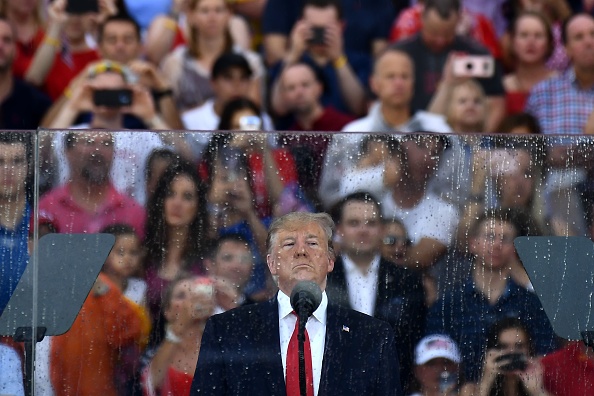 Before we dig in on Trump’s Salute to America speech, here, folks, is yesterday’s best tweet, if you haven’t seen it yet. White Supremacist Iowa Representative Steve King — on the request of someone on Twitter — thanking, uh, Colonel Jessup for his service:

Posting this before it gets deleted. pic.twitter.com/ABTFFHi2Q9

Now, for the main event: Trump held his self-serving military parade in D.C. yesterday designed not to honor America, but to honor Donald Trump. I did not watch it, because the part of my brain that did not want to feed his ego by contributing to his ratings thankfully outweighed the part of my brain that wanted to see a car crash. From what I understand, Trump delivered one of those teleprompter speeches, which is to say: It was mostly boring but at least it wasn’t horribly divisive and partisan. He didn’t use the Fourth of July to attack Democrats and the FBI, so good for him? I assume that the tanks he used as a backdrop and the generals he had flanking him did all the partisan work for him. Speaking of those generals, several members of the Joint Chiefs of Staff did not show (they were on “vacation”), and they sent underlings instead. That did not sit well with Lou Dobbs over on Fox News:

In any respect, the highlight of Trump’s scripted speech was when he praised the American military in its fight against Great Britain during the Revolutionary War. “Our army manned the air, it rammed the ramparts, it took over the airports, it did everything it had to do, and at Fort McHenry, under the rockets’ red glare, it had nothing but victory.” The thing about that is: There were no airports back then because there were no airplanes because they hadn’t yet been invented. Reminder: That was a scripted speech, meaning someone wrote that.

"…our army manned the amports (?), it rammed the ramparts, it took over the airports…"

Trump slurring and then trying to read off a TelePrompTer about the Continental Army supposedly taking over the airports in 1781 is…no words. #TrumpSpeech pic.twitter.com/83Tv6vsN8x

The response to that line on social media? Here we go:

Our army took control of the airports and then used their lightsabers to beat back the Britsith#TrumpSpeech #trumpfacts pic.twitter.com/dWq3z0s2R0

Recovered footage of the American troops taking over the airport during the siege of Yorktown #TrumpSpeech pic.twitter.com/ZFAetmXvhH

Maverick and Goose right after the Battles of Lexington and Concord.
#TrumpSpeech pic.twitter.com/foS2yjBHXh

Watching Trump’s speech, my son turns to me and said “did he say airports? Does he think they had airports in the 1700s?” My son is 11! #TrumpParadeFail

It wasn’t just the historical inaccuracies. If Trump checked in on Twitter this morning, he’d notice the following hashtags trending: #RevolutionaryWarAirports, #TelePrompTer, War of 1812, Fort McHendry, and #TrumpParadeFail.

Trump's parade was such a disappointment, he named it "Eric."#TrumpParade #TrumpParadeFail

#TrumpParade #TrumpParadeFail
If this isn't a metaphor for the whole embarrassing fiasco, I don't know what is. pic.twitter.com/X1tXZEGi3w

Everything about Trump’s little party last night was a massive failure, especially the small crowd size. They weren’t prepared for rain, the glass blurred his awful speech and he wasted a ton of taxpayer dollars. At least Trump baby blimp was there. A true VIP. #TrumpParadeFail

And I also saw this photo a lot on social media, which I’m sure Trump would appreciate.