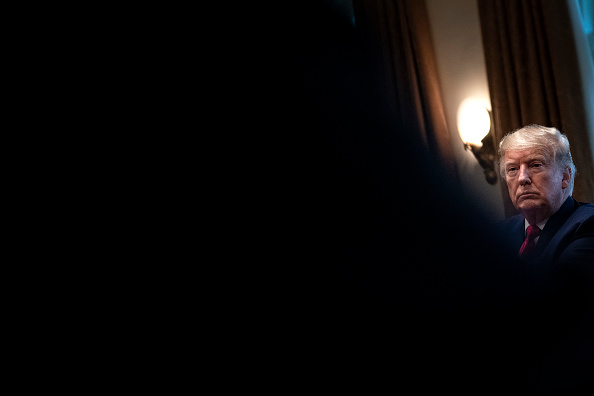 #TrumpVirusCoverUp is Trending on Twitter, and For a Very Good Reason

I don’t know if it’s because I’m supposed to be headed to Austin for SXSW next week, or it’s because I’m old, or if all of us are equally obsessed with news and theories about the coronavirus. It’s a constant source of conversation between my wife and me: “Hey! Did you see there’s a new case in Georgia?” “Yep. Got one in New Hampshire, too. And the case in Rhode Island involves a school administrator who went back to school and parents weren’t alerted until a few days later.”

It’s like listening to our parents talk about the weather. I am a sad cliche. But my God: How much have we all learned about infectious disease in recent weeks? How many people — be honest — have looked up the Spanish flu on Wikipedia in the last week? I heard a woman, I think in China, on NPR last week who was under quarantine, and she said that her family spent all day checking the latest numbers, that in a weird way it was a very connecting experience — an entire country spent all day checking the same thing on their phone. She felt a weird kinship with them all. It’s what’s happening here, I think. I wake up in the morning, and the very first thing I track before I get out of bed is where coronavirus cases have been confirmed. But we barely know the real story.

I hate weighing in on it publicly because the only insights I have are gleaned from reading 100 different articles a day plus the occasional conspiracy theory on Twitter. But I’ll tell you what it reminds me of. Last summer, my daughter had a really bad cough overnight. When she woke up, however, she was totally fine. To be safe, however, we took her to the doctor, and they checked her out and said she was OK. However, because my daughter was attending camp, my wife wanted to be abundantly cautious and had the docs test for whooping cough. The doc didn’t think she had it, but she gave her the test anyway, and told us not to worry and that our daughter was fine to go back to camp.

We didn’t think a single thing about it, until three days later — while we were on a camping trip with friends — my wife got a call from the doctor, who said that our daughter’s test came back positive. We had to leave the camping trip immediately, and the CDC asked us to quarantine ourselves for 5 days while we took antibiotics. We would never have known had we not tested. But my daughter got it from someone, probably at camp, and if someone has pertussis at a summer camp, half the people there probably have it. We just didn’t know because, especially in kids who have been immunized, symptoms for whooping cough are mild to nonexistent. We could have been in the midst of a huge outbreak of whooping cough that was basically invisible.

But you just don’t know if you don’t get tested, and in my very non-professional opinion, there are probably hundreds — maybe thousands — of coronavirus cases already. We just don’t know it, because no one is testing for it yet, because the White House is incompetent.

Some Countries Have Enough Coronavirus Tests To Administer To Thousands. We Don't. The Money Was Taken Away To Build A Useless Wall.

"This Is A National Scandal. They're Testing 10,000 a Day In Some Countries." - ER Dr. Matt McCarthy, New York pic.twitter.com/VDik8bwI6Z

My entire family got wiped out by the flu over the last two weeks. It was brutal. There’s a 99.9 percent chance it was not the coronavirus, but we’ll never know. But we could pretty easily track the spread of it. One of the girls’ best friends had it, then the girls had it, and then another of the girls’ best friends got it, and their whole family got it. We are all relatively young and in good health, so it knocked us out for a few days but now we’re all fine. And I think a lot of us are thinking, “Hmmmm. I wonder? It’s not like they tested. Why? BECAUSE THE TESTS ARE NOT AVAILABLE.”

You can’t control a pandemic if you don’t test for the disease. For a long time, we didn’t have the right test kits or something, because our Administration cut funding to the CDC. But also, the White House hasn’t wanted to test, because testing would reveal the problem, and if the cases aren’t confirmed, then they don’t exist. But now they have to test. We’ll see thousands more tested for it later this week, and hopefully thousands more tests next week, and I think — nonprofessionally — that what we’re gonna find is that this thing is already everywhere.

In King County, Washington, experts have deduced that at least 15,000 people probably already have it, but they would not have deduced it had six people not died, and six people wouldn’t have died, except the damn virus got into a nursing home, where the people are most vulnerable. Seattle is in King County, Washington. This woman, from Seattle, believes she has Covid-19. She has all the symptoms and lives near other infected people. She cannot get tested for the life of her.

I called the Corona hotline, was on hold for 40 minutes and gave up.

So I looked at the CDC and Washington public health websites. They told me to see a primary care doctor, but there's no information about testing.

I called the hospital. They do not have tests, but transferred me to the COVID-19 hotline to "answer my questions". Since I was transferred on a medical provider line, I actually got through. Progress!

The only way I can get treated is if my symptoms get so bad I develop pneumonia or bronchitis, which is very likely in my case. Then I'll be in the ER and quarantined for several days while waiting for a test and for the results to come back.

To sum up: this is not contained. No one knows what the fuck is happening. I can't work. WASH YOUR FUCKING HANDS.

Trump doesn’t want to test because he said it was a hoax!!! It’s simple folks, he doesn’t want to allow testing to be done because they will show how bad this thing is and therefore he was wrong. He’s putting us all at grave risk because of his ego!#TrumpVirusCoverup

Trump thinks we should use the flu vaccine to defend against coronavirus.

We could not be in worse hands.