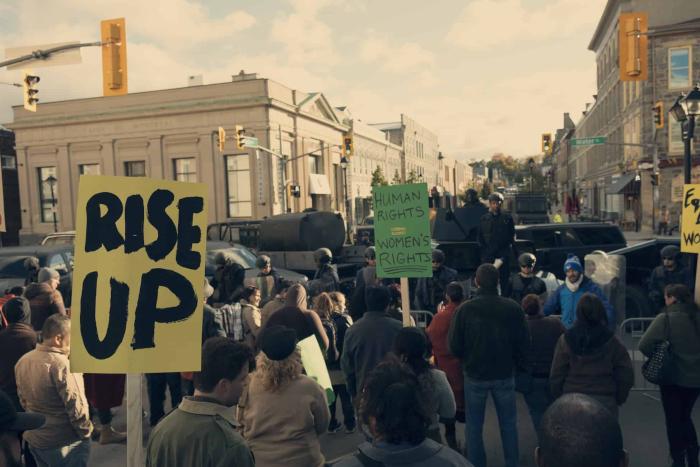 What Is Going on in Portland, Oregon?

For those of you not following along with what’s going on in Portland, Oregon, here’s a very brief tl;dr: Back in May, Black Lives Matter protestors began protesting in Portland, as they have everywhere else in the country. However, those protests did not fade in Portland, as they have in other cities. The Black Lives Matters protestors have been joined by some other organizations, and they’re going out there every night and engaging in mostly peaceful protests. There has, however, been some property damage over the course of two months, and the Mayor of Portland, Democrat Ted Wheeler, has basically alienated himself from both sides, because he hasn’t made efforts to defund the police, as protestors have insisted, nor has he prevented the protestors from damaging property, to the dismay of some business leaders.

I don’t know anything about Ted Wheeler, but he seems kind of f**ked. But as the protests continued, Trump decided to get involved, under the auspices of “statues,” because apparently, Trump is pinning his reelection hopes on protecting Confederate monuments, because Donald Trump has no idea how to read a room. Anyway, there’s like 2,000 troops in the United States who operate under the Department of Homeland Security and ICE and all those evil f**king organization, and Trump has decided to mobilize them to protect these statues under a clause of some sort that allows him to send in the troops to protect federal building.

So, he sends troops into Portland to “assist” the local police, only all it does is inflame the protestors. In fact, more people are coming out now, while the feds are launching tear gas and f**king abducting protestors, throwing them in rented cars, and taking them in for questioning without warrants.

It’s like an apocalyptic video game except it’s happening in Portland right now.

A federal paramilitary shadow force is roaming the streets of Portland in unmarked vans, whooping up on people (even non-protesters) and abducting them.

It’s some scary sh*t. The tear gas and the violence, meanwhile, draw in more protestors, like a large group of Portland moms who came out to protect the protestors.

I recognize a lot of the so-called “moms” as the same antifa women who dressed in black as recent as a couple days ago. They just put on a yellow shirt now for optics. Most of these people aren’t mothers & many don’t even identify as female. #PortlandRiots pic.twitter.com/UPffcao0fv

The feds didn’t appreciate them. This is what Trump is doing to moms. To MOMS.

This is maddening! These Portland moms, who PROTECT protestors, are treated like this?! It breaks my heart to see them teargassed, and I hope they know their sacrifice and strength aren't going unnoticed!! pic.twitter.com/WFgTAD2F0z

Meanwhile, Mayor Wheeler came out last night and joined the protests, and while he wasn’t particularly welcome by protestors, he stuck it out and probably gained some respect points from some for enduring the tear gas. (Other protestors, meanwhile, called it a photo op and called the mayor hypocritical, because he has allowed the Portland police to tear gas protestors, as well).

What Is Operation Legend?

In any respect, that’s what’s going on in Portland. Operation Legend, meanwhile, in an executive operation that essentially looks to duplicate the paramilitary force in Portland in other cities around the country, like Chicago, and Oakland, and … Albuquerque? Trump says he’s sending in troops ostensibly to fight “violent crime,” but as with everything that Trump does, it’s more about his reelection efforts. He wants to be the Law and Order President, and he wants to paint Democrats and Biden as violent protestors or enablers of those violent protestors, so that he can make ads like this:

You won't be safe in Joe Biden's America. pic.twitter.com/anIvM5DoMV

Meanwhile, Trumpers are posting sh*t like this, which is insane because it is literally Trump’s America. Right now! In the present!

This would be @JoeBiden’s America.

And that’s Operation Legend. What’s terrifying about it is not just that Trump is essentially perpetrating violence against largely peaceful protestors so that he can cut reelection ads, but what if those troops are still in those cities come November. Or in every major city? That’s some Handmaid’s Tale business right there, and you add it to the fact that Trump is trying to dismantle the postal service while the country is moving toward mail-in ballots because of a pandemic that Trump has actively made worse, and we have got a real goddamn clusterfuck on our hands.


← What Nick Cannon Can Learn From Desus & Mero | Alexandra Grant, Keanu Reeves, and the Perils of Being the Girlfriend of the Internet's Boyfriend →