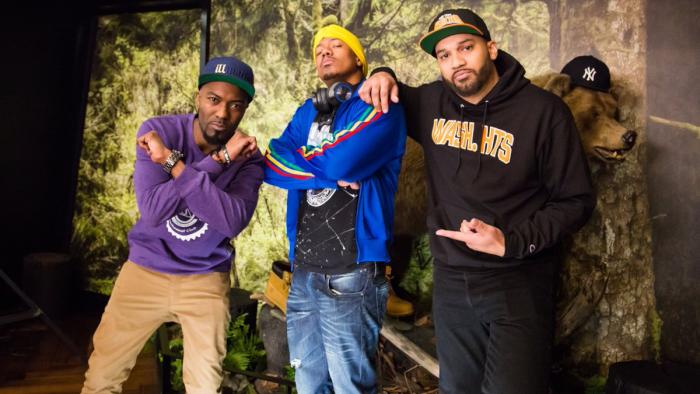 What Nick Cannon Can Learn From Desus & Mero

“No group owns suffering, and no one is too old to grow.” This incredibly powerful sentiment put forth by LZ Granderson has been haunting me for a few days now. He said those words specifically in reference to the whole Nick Cannon anti-Semitism debacle (more on that in a bit). If you stop and think about it, these words have much broader implications about society, influence and empathy.

I first came across his raw, honest, gripping article in the LA Times late last week and it shocked my brain awake. Granderson talks in depth about race and anti-Semitism, including the disappointment and regret he felt as a Black man watching a Black celebrity tearing down other marginalized communities.

The celebrity in question is Nick Cannon, aka the most boring guest actor to ever walk across the Brooklyn 99 screen. As part of his YouTube show “Cannon Class,” he interviewed Professor Griff, who you may remember from Public Enemy before he was expelled for making anti-Semitic comments himself. Not only did Nick choose to interview him, he also made incredibly troubling statements like, “It’s never hate speech, you can’t be anti-Semitic when we are the Semitic people … We are the true Hebrews.” Nick followed up all this mishigas by promoting anti-Semitic conspiracy theories as if they are fact. This is already a dangerous move, and it’s made even worse by this garbage fire of a remark about Jewish power. “(It is) going as deep as the Rothschilds, centralized banking, the 13 families, the bloodlines that control everything even outside of America.”

You know, the same kind of mierda peddled by the man currently sitting in the Oval Office.

After I read this, I didn’t feel anger, or fear. No, what I felt was confusion. Confusion how members of one marginalized group could attack another, instead of working together to dismantle a system that’s stacked against us all. Personally, to me, as a mixed-race Latinx and Middle Eastern Jewish woman, it hurts worse when I see this type of behavior from other celebrities who also identify as part of the BIPOC community.

I mean, how hard is it to not tear down other communities who are also suffering, who have been targeted and discriminated against and hunted down and killed? I feel like that’s a pretty low bar to clear, and yet way too many celebrities are stumbling over it. Thankfully, some of those who stumble use the opportunity to stop and re-evaluate how they’re walking through life. The perfect example? Desus & Mero.

I’m proud to consider myself a fan of these two hilarious, smart, thoughtful guys. Not only did they once take a break from adorably rooting for the Knicks to kindly make me a list of the best Dominican joints in New York City, but they have also put in the work when it comes to how they choose to present themselves. Back in the day, they weren’t exactly PC and were often way too comfortable with making homophobic or bigoted remarks.

In their own words, “The way we talked when we first started—it wasn’t so much that we were terrible people but we’d just never come into certain things. Common words that we used were slurs, and we’d never met the people to whom they were slurs. As we got more advanced and experienced, we realized they weren’t cool to say. And we wanted to reflect that growth on the podcast. Every now and again, we’ll get people who’ll say we’ve sold out. But it’s, like, Fam, we’ve grown. Sorry if you don’t like it. We’re becoming better people. And we’re still funny…How hypocritical would it be for us to say, ‘This guy talking about Black and brown people is fucked up,” but then we turn around and make a gay joke…Whoever you are, we’re for you.’”

Desus and Mero deserve all the props and love I can give them both. They are wonderful examples of celebrities (like Howard Stern, surprisingly enough) who have owned up to previous ableist or insensitive behavior. However, they represent the positive end of the “growth beyond biases” celebrity spectrum. The negative end, as embodied in Nick Cannon here, is not so easy to unpack. And it begs the question — do we need a deeper reckoning in Hollywood that ties back to examining our own biases and how we use our voice to uplift or harm each other?

As I asked these questions, I soon realized that I could not expect growth from my society if I did not also expect it from myself. Until recent events, heightened BLM protests and this piercing Vanity Fair article by Beandrea July that I will continue to reference whenever I get the chance, I never questioned that I could be part of the problem. The article challenges us head-on with the title, “If You Support Black Lives, Then Watch Black Stories,” and goes on to explore the true power of representation and why buy-in from different audiences matter.

It made me stop and wonder if I was actively putting in extra effort to ensure I’m exposed to Black stories. Or, conversely, if I was taking that all for granted because I figured that as an ally and part of the BIPOC community myself, I was already “educated enough” on the subject. What I came to realize was that I’d been assuming that allyship permeated all aspects of my life and informed all the different choices I made, instead of ensuring that it really did. That assumption was wrong, and it’s something I’m actively working on, still.

If I expect that same grace for myself, how can I not extend it to Nick Cannon and others like him? This does not mean that what he said or did was acceptable, or that he has a free pass to keep sauntering along as if nothing happened. It means that he should be given the chance to learn, grow, change, and put in the work to become a better, more open-minded person if he so chooses.

Honestly, those of us who consider ourselves “woke” are still complicit in propping up an unjust modern society. So it would be hypocritical of us to challenge public figures like Nick without demanding that same change for ourselves. It would be equally hypocritical if we expect forgiveness for our own mistakes without extending that same grace to other people. So I challenge us all to follow in the footsteps of Desus and Mero, and look beyond ourselves to make space for other perspectives.

Because that’s something we so easily forget. Celebrities are larger than life, and their influence can be downright terrifying, but at the end of the day they’re just people. Of course we need to hold them accountable and rightfully call out their toxic behavior, like we have done and continue to do despite pitiful protests against “cancel culture.” But we can’t just write them off, throw them on a trash pile and ignore them while also trying to grow and deepen our awareness as a society. We have to learn from each other, listen, teach, hurt, heal, cry, bond and reach.

As a Jewish woman, I still flinch every time I read excerpts from that chillingly casual anti-Semitic interview. Forgiveness isn’t easy, and neither is compassion. I’m not going to sit here and pretend that I’m already good with Nick Cannon, especially in light of his sketchy post-scandal behavior. What I am going to do is try to give him the benefit of the doubt until he proves that he truly doesn’t deserve it. Because the optimist in me is choosing to focus on the second half of LZ’s quote from above.