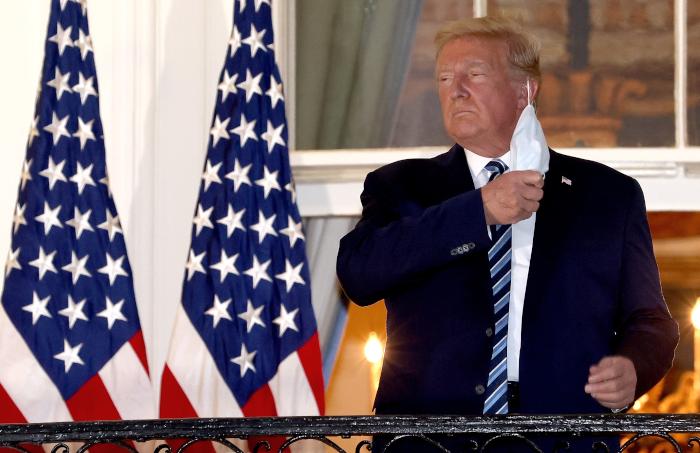 9:12 — OK, last updates tonight, because I gotta step away. We’ll start all over again tomorrow, I’m sure. Here’s a better look at his return. He does not look good.

Trump appears to be wincing in pain while he breathes pic.twitter.com/YKhGhu0VN0

Drudge knows what’s up. (WHAT? Did I just write that?)

Probably not the headline Trump was looking for. pic.twitter.com/k9aMVyMnBc

I will never love another President again! https://t.co/KntLywoHcf

Rudy was part of Trump's debate prep team and says he's awaiting the results of a coronavirus test pic.twitter.com/UZI9TN67w6

7:16 — This is hilarious. Tead the pictured comments from Claudia Conway. Is that inside intel from an eavesdropping teenager?

It is the most fucking hilariously 2020 thing that Team Trump is all old Boomers who still don't fully comprehend how the Internet works and have no idea that everyone's watching Claudia Conway's TikTok and haven't taken any steps to stop talking about shit in front of her https://t.co/3S0kVogEkJ

7:05 — Here are two separate and unrelated statements: 1) You are not allowed to wish that Trump would die on Twitter. 2) This is not Twitter.

Ok since we insisted on broadcasting this: The president looks like that guy who’s trying and failing to act normal in public while tripping balls https://t.co/T3sAiLmHwh

WATCH: Trump walks up the steps on the White House South Lawn, takes his mask off and salutes Marine One for a photo opportunity. pic.twitter.com/f6sF25KaIw

Why did an active COVID patient just remove his mask before walking indoors into the White House?

I feel awful for the permanent White House staff. https://t.co/CWHHmDAOiZ

I look forward to the Curb Your Enthusiasm cut later tonight.

6:19 — 40 percent of America want these people to control the government.

Breaking from NYT: White House has decided not to contact-trace the apparent super-spreader event last Saturday, and the CDC has been cut out of the process:https://t.co/PpGRF1DzIy

We suggested earlier that this would metastasize into a bigger scandal. It's already happening: https://t.co/K39oxJ4i6M

NEWS: Trump wants to make a dramatic exit from Walter Reed. He plans to walk out the golden front doors on camera, sources tell @SalehaMohsin and me. He's shooting a video inside the hospital first, and then will walk to car and then to Marine One. No plan to speak to press. pic.twitter.com/DqLY6MvyXZ

4:55 — This is where we are now, y’all. The White House played down the Coronavirus pandemic for 9 months, and now they want to make-out with COVID, and anyone who doesn’t must be a coward. President Dwayne Elizondo Mountain Dew Herbert Camacho would be so proud.

thought he was into the idea of barriers between himself and women https://t.co/1cP2g0mPxz

4:40 — That asshole is gonna infect everyone in the White House, isn’t he? “I gave you COVID for your own good! It’ll grow hair on your chest!”

The president is eager to have some kind of West Wing moment, per ppl familiar with what he's been saying, but is being urged against it.

Don’t be afraid of Covid?!

You’ve been under round-the-clock care by the best doctors using the best drugs. Do you really think everyone has access to that?!

Sadly, I’m sure you’re aware of that disparity, you just don’t care

This is reckless to a shocking degree, even for you https://t.co/H8CGlD9DcZ

3:25 — Trump’s doctor has spoken, and among the things that he said was that he won’t say whether Trump has pneumonia, and, in fact, he won’t answer a lot of questions, citing HIPAA. That means that Trump hasn’t given him permission to share that information, which means that Trump is hiding details surrounding his health less than a month until the election.

HIPAA apparently only applies to the bad news.

2:45 — If he doesn’t worsen and return to the hospital, he and his supporters going to be absolutely insufferable for the next month, and will do nothing but embolden those who believe that Covid is no big deal.

I will be leaving the great Walter Reed Medical Center today at 6:30 P.M. Feeling really good! Don’t be afraid of Covid. Don’t let it dominate your life. We have developed, under the Trump Administration, some really great drugs & knowledge. I feel better than I did 20 years ago!

Or - don’t be afraid of Covid if you are President of the United States with access to the best care, drugs and experimental treatment. https://t.co/Ze9kp53aBv

This is nuts, just fyi https://t.co/VLvsTSXx1S

People are going to f**king embrace COVID-19 for this man.

12:59 — The cases inside the White House continue to mount.

Two of Kayleigh McEnany’s deputies in the press shop have now tested positive as well, CNN has confirmed.

12:35 — Even Donald Trump Jr. now thinks his father is “acting crazy,” according to Vanity Fair:

Sources said Donald Trump Jr. is deeply upset by his father’s decision to drive around Walter Reed National Military Medical Center last night with members of the Secret Service while he was infected with COVID-19. “Don Jr. thinks Trump is acting crazy,” one of the sources told me.

According to sources, Don Jr. has told friends that he tried lobbying Ivanka Trump, Eric Trump, and Jared Kushner to convince the president that he needs to stop acting unstable. “Don Jr. has said he wants to stage an intervention, but Jared and Ivanka keep telling Trump how great he’s doing,” a source said. Don Jr. is said to be reluctant to confront his father alone. “Don said, ‘I’m not going to be the only one to tell him he’s acting crazy,’” the source added.

Those Vanity Fair sources, by the way, are often the people themselves.

12:02 — A real actual argument from the Trump campaign.

"He has experience now fighting the coronavirus … those first-hand experiences, Joe Biden doesn't have those" — Trump campaign spokesperson @ErinMPerrine attacks Joe Biden for not getting coronavirus pic.twitter.com/wRMGOVUpc1

The White House press secretary has now tested positive for coronavirus. She briefed reporters at the White House yesterday without wearing a mask https://t.co/0H0gpUnOU1

Video of her from *This Morning* shows she was speaking with *No Mask* to reporters pic.twitter.com/JbfSxBr1Wa

Meanwhile, I’m not a doctor, and I don’t have any experience with steroids or dexamethasone, specifically, but I am reading a lot of anecdotes (including several in our comments section) that suggest it may be why Trump is behaving as he is right now, and strongly suggests that he should not acting as the leader of our country right now (this has always been true, of course, but especially right now):

When I underwent chemo years ago, I was treated with dexamethasone for weeks.

The initial euphoria was awesome! Then came vertigo, insomnia, withdrawal, and bone loss. I was 24. I wasn't even in charge of my bedroom, let alone the United States of America.

Monday, October 5th, 9 a.m. — Good morning. If you have checked the President’s Twitter today, it looks like this:

I have read that, included among the side effects of the steroids that Trump is taking is hyperactivity. Also agitation. It might also explain why the President ignored medical protocols and endangered the lives of his Secret Service agents (who will have to quarantine now) to go on a brief joyride around Walter Reed Hospital yesterday.

For those who blissfully avoided social media and the news this weekend, a brief recap: Donald Trump was admitted to the hospital on Friday night “out of an abundance of caution,” even though we later learned that he had a very high fever and that his oxygen levels dropped twice. His doctor has been cagey with the truth, which he has since admitted, saying basically that he didn’t want to panic the President, who believes — I guess — that a positive attitude will defeat a virus (or as my friend Hillary calls it for the benefit of my children, “Patitude).”

Nevertheless, the President has been on some serious drugs, beginning what appears to be last Thursday, when he took an experimental antibody treatment in the hopes that it would rid him of symptoms, so that he could continue acting as normal despite having the virus. In fact, had Jennifer Jacobs at Bloomberg not revealed that Hope Hicks had tested positive, who knows how long Trump and the 25 people in Trump’s orbit might have kept this a secret (remember, we still don’t know why Trump was in Walter Reed last year). Thank god for Jennifer Jacobs, and also Claudia Conway, who revealed that her mother, Kellyanne Conway, was infected (before revealing that she, too, had it, thanks to her mom. THANKS MOM).

There have also been a number of reality show stunts over the weekend, including a few videos that Trump — looking pale and not that great — has put out to show he is healthy, as well as the joyride around Walter Reed for the benefits of TENS of Trump supporters. But, you know, as Trump has said, “He’s learned a lot about COVID.”

Meanwhile, the Republican party is trying to put lipstick on a pile of shit here by arguing that Trump is Mr. Tough Guy and, by virtue of putting his Secret Service agents in danger, he’s better suited to the Presidency than Joe Biden.

Anyway, there is some suggestion that Trump may leave the hospital today, although all the medical professionals say that is insane because he’s on steroids (which is for severe cases) and the most uncertain period is Day 7-10. If Trump left the hospital and had to return tomorrow, what would that do to his tough-guy image? Would the GOP characterize a return trip to Walter Reed as, “Trump has done more traveling than Joe Biden has today!”

"The doctors will actually have an evaluation sometime late morning and then the president, in consultation with the doctors, will make a decision on whether to discharge him later today,” Mark Meadows tells Fox News.

Anyway, the media is still both sidesing this thing, cause the media gonna media:

“Some experts are wondering: is Joe Biden TOO healthy?” https://t.co/rkoiAEyvdV