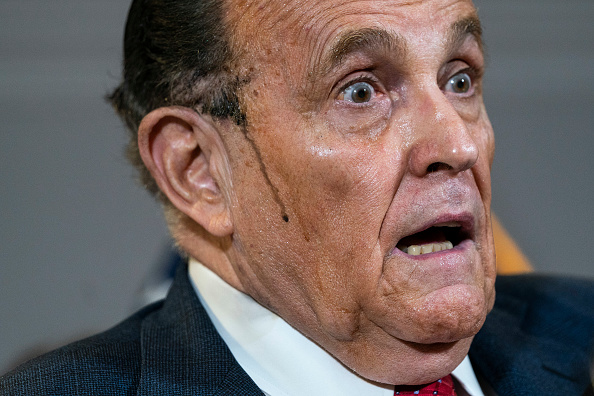 Transition Updates: And You Thought You Hated Giuliani Before

Everyone knows that the powerful and the connected get priority treatment in the United States, but it’s one thing to know that, and it’s another for someone to brag about it, as Rudy Giuliani did yesterday after being admitted into a hospital and given the same experimental drug received by Donald Trump.

“If it wasn’t me, I wouldn’t have been put in a hospital frankly,” Mr. Giuliani, the president’s personal lawyer, told WABC radio in New York. “Sometimes when you’re a celebrity, they’re worried if something happens to you they’re going to examine it more carefully, and do everything right.”

Galling, isn’t it? And is it just me, or does that echo Trump’s, “Sometimes, when you’re a star, they let you do it. They let you do anything”? Yech. In either respect, Chris Christie, Trump, and Ben Carson, as well as Giuliani, have all received Regeneron, which is otherwise being rationed out in hospitals around the country because the supply right now is so scarce, and let’s be clear: Without it, at least one of those men probably would have died, if not more. They were all high risk with comorbidities. They survived because of access to a drug that the rest of us do not have access to, although Giuliani — who probably thinks a banana cost $10, Michael — also believes that COVID-19 is “a treatable disease” now because he — like the President — doesn’t understand that we’re not all in a position to receive that medication, despite the fact that half the people with COVID, according to officials, should qualify as candidates for it.

The belief that it is a “treatable” disease, in fact, is exactly why Trump is holding Hannukah parties in the White House. During one of the two Hannukah parties (each with 100 people), Trump also insisted that “we’re going to win the election in a landslide.”

VIDEO: Trump tells the crowd at the Hanukkah party that with the help of “certain very important people, if they have wisdom and if they have courage, we are going to win this election.” — remarks followed with loud chants of “four more years.” pic.twitter.com/FjCyFGOqPC

Who’s going to tell him?

Meanwhile, speaking of Giuliani, remember our old friend, Melissa Carone? It turns out, she used to be a stripper in her early 20s. No judgment here, of course, but her choice of venue — called the Bada Bing — leaves a little something to be desired:

Mellissa Carone, 33, used to dance at the venue in 2010, which has the same name as the infamous strip club featured in HBO’s hit show The Sopranos. The seedy joint even takes after the mobster strip club, having its own history of violence. It finally shuttered following a string of incidents, including an attack in 2010 where four men, including the manager, were arrested and charged with torturing a man in the basement, drilling through his hand with an electric drill.

I’m also not terribly broken up that, by making herself a public figure, Carone is now getting the public-figure treatment, as The Daily Mail is interviewing neighbors and friends, who say that her dancing career is “the worst kept secret in town,” but also that Carone “was never easy to get along with, always stuck up and thought she was the hottest thing around.” Sounds right.

Elsewhere, on the Democratic side of things, Joe Biden has tapped Susan Rice to lead the White House Domestic Policy Council. Rice’s experience is in foreign policy, so I’m not sure why she’s taking this position, except that it doesn’t require Senate approval. Rice is unlikely to receive Republican approval in the Senate after she was scapegoated for Benghazi, otherwise Rice — on the shortlist for Vice President — might have nabbed the Secretary of State position.

Speaking of the Senate, according to The New Yorker, 87-year-old Diane Feinstein’s memory is failing her, according to staffers, who spoke anonymously about her condition:

… many others familiar with Feinstein’s situation describe her as seriously struggling, and say it has been evident for several years. Speaking on background, and with respect for her accomplished career, they say her short-term memory has grown so poor that she often forgets she has been briefed on a topic, accusing her staff of failing to do so just after they have. They describe Feinstein as forgetting what she has said and getting upset when she can’t keep up. One aide to another senator described what he called a “Kabuki” meeting in which Feinstein’s staff tried to steer her through a proposed piece of legislation that she protested was “just words” which “make no sense.” Feinstein’s staff has said that sometimes she seems herself, and other times unreachable.

That is unfortunate. Eighty-year-old Nancy Pelosi, however, still has the power in the House to put the fear of God in its members.

While suggesting she would like to get a deal by next Friday, she didn't sound optimistic. And the pandemic means holiday vacations just aren't happening, for her or McConnell.
A long staring contest could be happening.

Get that COVID relief, Nancy.