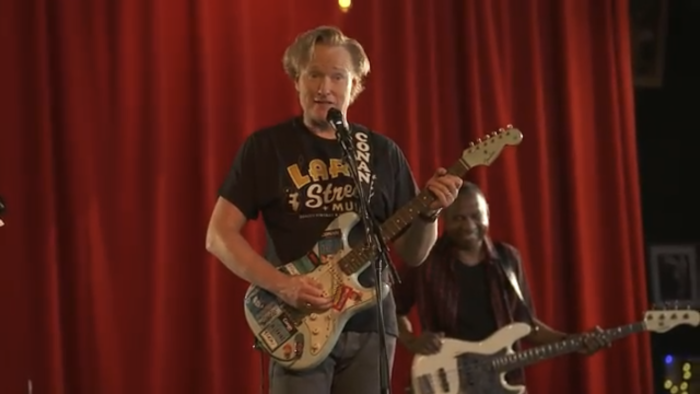 Conan Reveals The Horrifying Way He Motivates His Writers

If you’ve ever had employees, you know that you have to keep them motivated. An “attaboy” here or an “I need those TPS reports this afternoon” there is always helpful. Whether you run an office or a fast-food franchise or a late-night show on TBS, it all comes back to motivation. So, late-night host and lead singer of an all-dad garage band, Conan O’Brien, revealed just how he motivates his writers.

As the Conan loyal or “Conanites” are likely aware, O’Brien is damn good on the guitar! He’s played live on his show many times and even incorporated it into his post-NBC tour. So it should come as no surprise that he likes to jam with his show’s musicians, known as the Basic Cable Band. Here’s them playing Run Run Rudolph by Chuck Berry!

Pretty good, right?? Well, as good as Conan is, he can also use his powers for eeeevil! “The band was always there at rehearsal and I would get impatient if I was waiting for a piece of writing or a sketch to be ready to rehearse,” said O’Brien. “So what I finally did is I found a song that was so irritating to the writers, if I gave them 15, 20 minutes and the piece wasn’t ready, I’d start to play this song.” The song: Keep Your Hands To Yourself by the Georgia Satellites.

At first I thought “Conan’s a good singer. Whatever he’s doing can’t be that bad.” … I severely underestimated Conan’s well documented love of annoying his employees.

← Saul Goodman Goes Full John Wick in the Spectacular 'Nobody' Trailer | Transition Updates: And You Thought You Hated Giuliani Before →