An Update on the Iowa Caucus Results

Again, let me reiterate as I did earlier this morning (below) that all of this will be forgotten in a week’s time, or by tomorrow after Trump says something at his SOTU that churns the news cycle again, but it is a shitshow in Iowa today. The f*ckery is almost hilarious (but also, definitely not hilarious).

So, here’s what we know: Apparently, the Democratic Party will release results at 5 p.m. EST today, but, uh, only 50 percent of the results. Meanwhile, Bernie has released his internal numbers, which show him winning and Mayor Pud in second place, which is not the story. The story is that Biden is in fourth/fifth place.

Team Bernie sends new internals. Notably nothing on delegate totals but does have him winning after realignment pic.twitter.com/PXhb4QvMq3

If those internal numbers are accurate — or close to accurate — it would also explain this.

CNN's John King reports that the Biden campaign may seek a court injunction to halt this afternoon’s release of the Iowa Caucus results.

Before the Iowa results are released, Biden's campaign is questioning the integrity of the results. pic.twitter.com/nkr83ZE5fD

The Iowa Caucus is dumb, but hell if it might just sink Biden’s campaign.

OK, well, the bad news first then, eh? What happened in Iowa is this: Your grandparents didn’t want to download a goddamn app on their phone and learn how to use it because they were worried that it might take up valuable storage space dedicated to pictures of their grandchildren, so they instead decided to call in votes like they always have, except that the system wasn’t set up for it this year and the phone lines melted down.

It was a simple case of volunteers used to listening to record albums refusing and or failing to understand how to download the Spotify app.

The good news is, all the record albums are available. It’ll just take several more hours to play them back.

The upside: Democracy still works! The downside: Twenty-something Democratic Presidential candidates spent the better part of a year campaigning in Iowa, where — along with their volunteers — they put in millions of dollars and millions of hours worked, and in the end, the Iowa results are probably not going to matter as much. The candidates (and much of the media) have already moved on to New Hampshire, so no one is going to get that Tuesday morning bounce into New Hampshire. The bounce will come later after your coffee has worn off, and when you are too tired to momentum.

The really bad news is this: This is what’s trending on Twitter this morning. 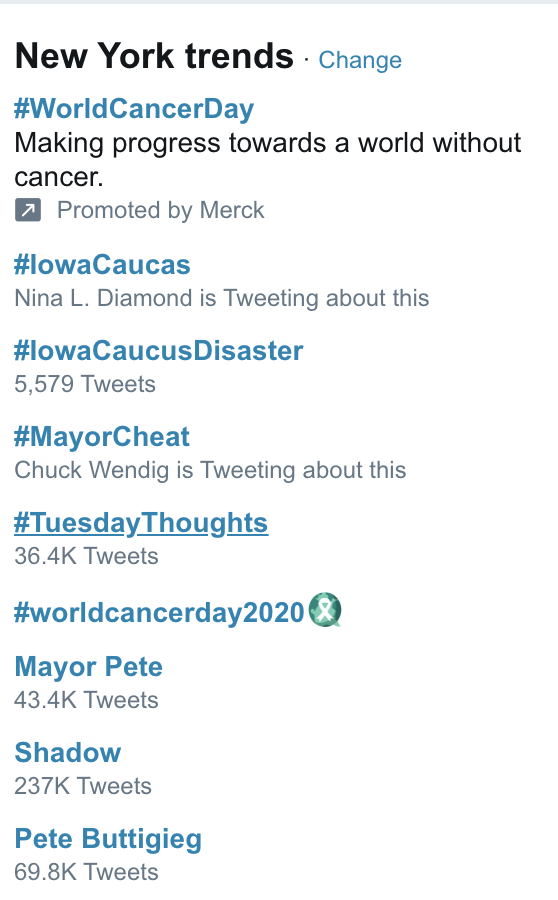 That business is largely bot oriented or driven by GOP chaos agents, or by Russians. It’s meaningless, designed solely to create divisions. The one good thing Facebook did was to get rid of trending stories; Twitter should do the same because it is so easy to exploit and it so often exploited.

But there was no hacking. There was no cheating. None of the candidates were involved in any shenanigans. There was nothing nefarious going on here. I mean, Mayor Pete declared victory without providing evidence of that victory, but Mayor Pete is a pud. What else did you expect?

You know when you go to the polls? And you know how 6 out of every 10 poll workers is very sweet, very helpful, and over the age of 65? Now imagine all of them waiting until election day to download an app they haven’t been trained to use and trying to figure out how to input data from an already confusing process?

That’s what happened in Iowa. We’ll get over it. We’ll get the results later today. Bernie or Mayor Pete (or maybe even Warren or Klobuchar) will celebrate and Biden (from what I hear) will lick his wounds and this will all be completely forgotten by Friday.

On the other hand: No way Iowa should be allowed to go first ever again. It shouldn’t have been first to begin with. I still like the idea of doing retail politics in a small state to kick off the primary season, but it should be someplace with a relatively small population and a lot of diversity, like New Mexico.


← David Letterman Recounts His Feud with Quentin Tarantino on 'Desus and Mero' | With the 'American Dirt' Backlash, Does Oprah's Book Club Still Matter? →