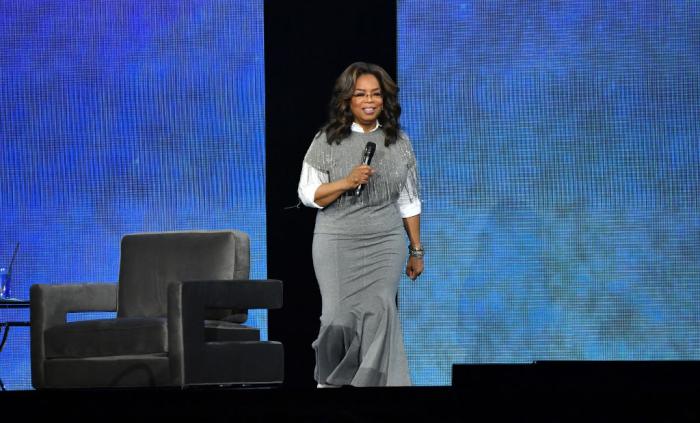 Last month, Oprah Winfrey announced the latest addition to her prestigious book club. In an Instagram post and live on CBS’s This Morning, she revealed that Jeanine Cummins’s social thriller American Dirt would receive her blessing, which ensured the novel’s status as a future best-seller and conversation starter. Long before Oprah got on board, American Dirt was already attracting headlines and being positioned as one of publishing’s sure-fire hits of 2020. Flatiron paid Cummins a reported seven-figure advance for the book, which tells the story of a Mexican woman and her son who flee their hometown and head to the border to escape a murderous drug lord. The cover includes a quote from Don Winslow calling it ‘a Grapes of Wrath for our time.’ Other fans include Stephen King and the legendary Mexican writer Sandra Cisneros, who declared it to be ‘the great novel of Las Americas.’ Oprah may have been joining the hype train, but it was her name and all the weight that it carried that guaranteed the success of American Dirt.

If you’ve been keeping up with this story then you’ll know that’s not entirely how things have unfolded. Latinx and Mexican critics of American Dirt have been eloquent and precise in their dissection of the novel, noting how inaccurate its depiction of the country and immigration into the United States is, how dependent it is on outdated stereotypes and tragedy porn, and how generally sloppy the writing itself is (a point also made in the review by Parul Sehgal of The New York Times.) Flatiron canceled the very expansive press tour for the novel, citing security concerns, then announced plans for a town hall-style series of conversations, which seemed like a smart move if you ignored the sheer optics of inviting people of color to do all the heavy lifting while the white people cash the cheques. A petition is circulating to ask Oprah to rescind her endorsement of American Dirt, which has been one of the more direct courses of action taken by those trying to get beyond the ‘we’re starting conversations’ part of the issue. For some, Oprah’s support of the novel is what stings the most, although it’s dishearteningly unsurprising for many.

Oprah’s Book Club kicked off in 1996 with the selection of Jacquelyn Mitchard’s The Deep End of the Ocean. Over the next 24 years, then over the past eight years after a hiatus, Winfrey has chosen various titles for her avid audience to read and discuss, thus ensuring national conversations on literacy as well as many happy publishers. A 2007 article by Business Week estimated that her name alone had the power to sell a book ‘anywhere from 20 to 100 times that of any other media personality.’ According to The New Yorker, ‘the twenty-two books she picked in the first three years sold an average of one million four hundred thousand copies each.’ She got people reading and she got them reading a lot, from Joyce Carol Oates to Charles Dickens, self-help guides to classics of black literature, gut-wrenching memoirs to dystopian bleakness.

One of the most common criticisms leveled at Oprah’s Book Club is the notion that her choices are focused more on her general agenda of encouraging her audiences to ‘live their best life’ than on enjoying great works of literature. Scott Stossel of The Atlantic wrote in 2011 that ‘there is something so relentlessly therapeutic, so consciously self-improving about the book club that it seems antithetical to discussions of serious literature. Literature should disturb the mind and derange the senses; it can be palliative, but it is not meant to be the easy, soothing one that Oprah would make it.’ This seems to overlook how daring and tough to read many of her choices were. Toni Morrison’s work is hardly a comforting walk in the park. Neither is John Steinbeck or Leo Tolstoy or Cormac McCarthy. Jonathan Franzen, ever the petty a**hole, said that he felt conflicted about her choosing his novel The Corrections for the club because it would be a ‘hard book for the audience.’ She eventually uninvited him but let him back in for Freedom a few years later.

It’s tough to ignore the pervasive misogyny and racism surrounding a lot of these extremely elitist criticisms of her book club. Some of her choices may have been pretty schmaltzy and rooted in a kind of tragedy porn that has never appealed to me, but she also by and large celebrated works by and for women. She placed Maeve Binchy side by side with Isabel Allende and Barbara Kingsolver, Joyce Carol Oates with Pearl Cleage. Said books, admittedly, tend to be big on pain and tragedy, to the point of fetish. The first-ever Book Club choice featured a kidnapped child and a mother’s mental breakdown. Wally Lamb, one of her favorite authors in the club, frequently tackles topics like rape, miscarriage, and PTSD. Cheryl Strayed’s memoir Wild, the first pick from the revived book club, discusses the author’s grief, addiction, and loss of her toenails.

Book clubs and literature circles were originally intended as ways for people, usually women, to convene and cultivate their minds in ways that society often disallowed. Such events were also common places for political organization and social development. While modern book clubs aren’t so radical, they still have that coding of female rebelliousness. Think of the film Book Club and the image of older women gathering together in a male-free space to drink and discuss dirty books and be generally unruly. Oprah was and remains a key guide for women in public and private spaces, helping them to open up about taboo subjects, introducing them to new means of self-improvement, and getting them to add new emotional layers to their reading material of choice. The literary value of such titles will always be debated, legitimately or otherwise, but there’s always something to be said about getting casual readers out of their comfort zones.

Nowadays, Oprah is not the only game in town. Celebrities starting their own book clubs are par for the course now, especially for those who are looking to establish themselves as power players beyond their original fields. Reese Witherspoon’s book club isn’t just a savvy strategy for her to show her appeal to audiences outside of movies and TV: It’s a direct pipeline for more content, allowing her to promote the books she options for adaptation and further build up the audience for said stories. She makes sure more people are aware of titles like Little Fires Everywhere and Where the Crawdads Sing by slapping her name on the cover and getting the social media buzz a-brewing, then once they premiere in theaters or on the telly, more people than ever are hyped to see the book they loved so much come to life with a celebrity they adore front and center. Reese learned well from Oprah, but seldom did she use her book club power for more than the chance to get people reading. She may have optioned Toni Morrison’s Beloved for the big screen but she never made it a book club choice.

But here’s the thing — she’s still Oprah f**king Winfrey! Nothing will ever dilute her influence. How could it? Few pop culture figures of the past 40 years have changed the world as she has. Even though her iconic television series isn’t on the air anymore, she hasn’t gone anywhere. Publishing at large owes her an insurmountable favor for keeping them afloat during times of boom and bust, and right now, the industry is heavily in the latter. If you’re, say, a publisher who just sank at least one million dollars into one book and need everything to ensure your investment pays off, who are you going to send an advanced ready copy to in the hopes that you can get at the very least a positive cover quote? For American Dirt, Oprah makes the most sense. She’s an all-powerful mogul, the mentor everyone wants, and few figures in the public eye are as trusted as she is on all matters, including your next reading choice. For many, Oprah’s voice will be the only one that they want to hear, even over those of the Mexican and Latinx community who are patiently and concisely explaining why works like American Dirt do more harm to them than good.

That’s why it matters that Oprah’s endorsement is one of the key aspects of the American Dirt story that activists and readers are focusing on as a means of change. As of the writing of this piece, the book is officially a New York Times best-seller. Could it have gotten there without Oprah? Maybe, but it was her that guaranteed it, and that’s why I don’t buy this whole ‘cancel culture is trying to hurt Jeanine Cummins’ nonsense. Ultimately, even if Oprah pulls her support, she and the novel will be fine. James Frey got chewed out in glorious fashion by Oprah for his lies but that didn’t stop A Million Little Pieces from being officially one of the highest-selling entries in the history of her book club.

American Dirt is clearly a book intended for nice white readers who want to feel socially conscious for a few hours but not necessarily in a truly challenging or complicated manner. I wonder if Oprah was aware of this when she chose it. In criticizing the Book Club’s choice of Dickens, The New Republic claimed that ‘The Book Club has carved its niche among readers by telling them that the novel is a chance to learn more about themselves. It’s not about literature or writing; it’s about looking into a mirror and deciding what type of person you are, and how you can be better.’ If that is true, if the intent of Oprah’s Book Club is to help you live your best life, then who gets to do so with the deification of American Dirt? Who improves from the tragedy porn of a marginalized community currently facing political demonization from the highest office in the land, all spun into a ripping yarn to read on the subway?

Oprah has a lot of blind spots that manifested in noticeably problematic ways during the tenure of her series, particularly with her giddy endorsements of people like Dr. Oz, Suzanne Somers, and Jenny McCarthy, as well as her promotion of questionable self-help titles such as The Secret. It’s her seeming lack of scepticism with such topics that makes her so appealing to her audience and continues to define her as a cultural tastemaker. With American Dirt, we’ve now seen the gaps in her knowledge and preparation made larger, but Oprah will remain Oprah for years to come. She’ll always matter. Hopefully, American Dirt will not, but hey, it’s already made its money from her. What else matters?

← There's No Need to Get Worked Up Over The Failure of Iowa's Dumdum Caucus | Stream It Or Nah: Netflix's Harlan Coben Mystery, 'The Stranger' →