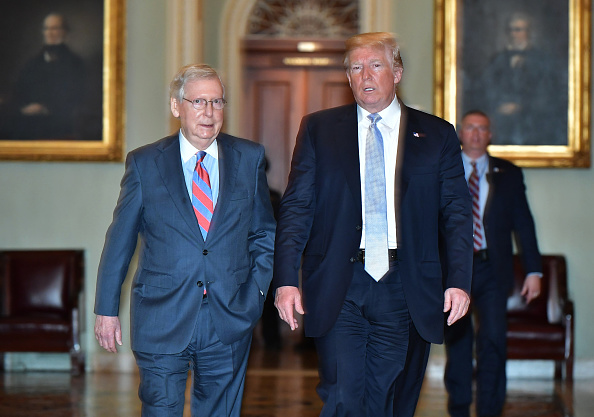 There's an Internecine Battle Brewing in the Republican Party Over ... Democracy

I spent way more time than I would have liked this morning poring through the transcript of Donald Trump’s call with Georgia secretary of state, Brad Raffensperger, and it is B-A-N-A-N-A-S. It’s an hour-long, mostly one-sided conversation in which Trump reels off one delusional conspiracy theory after another. I honestly can’t tell if Trump believes what he’s saying or not.

He sounds convinced that he had to have won Georgia by 300,000 or 400,000 votes, at least, and that all of these conspiracy theories are true. Where does he find all of these crackpot theories, other than Newsmax or OAN or … has Trump fallen into a YouTube rabbit hole? He’s convinced 5,000 dead people voted in the election. He’s convinced that ballots for him were shredded in Fulton County. He’s convinced that there are thousands of Trump voters who weren’t allowed to vote, and that thousands of Democratic ballots were illegal, and when you add up all the numbers based on YouTube conspiracy theories, maybe you can convince yourself that you won by 200,000 votes. However, the thing that Trump seems to be most convinced by is that he had rallies with “25 to 30,000 people” and that Biden’s only had 100, ergo how could Biden have won?

He really does think that rally size and nationwide popularity are correlated.

Mostly, though, it sounds like he’s throwing all of these conspiracy theories out there in the hopes that Raffensperger will use one or two as an excuse to cook the books. He really seems to be saying, “Look here, Brad. We have all of this ‘evidence’ showing that I won by 300,000 votes, so I just need you to come around to my side of things. I don’t need all 300,000 votes. Just 12,000, so move some numbers around, and just go ahead and let everyone know that I won the election, OK? No biggie. Just get it done in the next 24-48 hours. And if you don’t, well, you know: Maybe I’ll bring criminal charges. Maybe I’ll make sure you never win another election. Maybe I’ll ensure that the GOP Senators lose on Tuesday. Maybe I’ll destroy the entire Republican party of Georgia.”

If you listen to nothing else, listen to this clip, where he says, basically, “There’s nothing wrong with saying, you know, that you have ‘recalculated.’” This guy has been in charge of the United States for four years.

The audio of Trump demanding the Georgia secretary of state “find” enough votes so his loss to Biden can be overturned needs to be heard to be believed pic.twitter.com/jzjzwhcgDl

It’s interesting how this will play out after Wednesday (please, God, just get us through Wednesday). Once that runoff in Georgia is over, I fully expect that Mitch McConnell and about half the Republican party will drop Trump. The battle lines are already being drawn. This is from the NYTimes:

With their Senate power on the line in Georgia in two days, Republicans entered the new Congress on Sunday bitterly divided over the basic question of whether to acknowledge the reality that Mr. Trump had lost the election, or to abet his unjustified and increasingly brazen attempts to overturn the results.

The extraordinary conflict among congressional Republicans reflects the dilemma they face after four years of acquiescence to Mr. Trump’s whims and silence in the face of his most outrageous actions. Now that the president has escalated his demands to subvert an election, they are confronting a litmus test involving democracy itself, keenly aware that many voters could punish them for failing to back Mr. Trump.

It will be Trump vs. McConnell for the next two years, and I fully expect that Mitch McConnell will win, although he may annihilate the party in the process. Or rather, I think McConnell hangs on to Fox News and the Republican party and that Donald Trump creates a third-party, one that follows OAN and Newsmax. Trump is going to do what he does — scorch the Earth behind him — and McConnell is going to do what he does, which is to destroy any shred of credibility Trump has remaining with sane people.

In the meantime, the Republican party itself has cleaved along these lines, with Ted Cruz, Kevin McCarthy, and Josh Hawley siding with their abuser, and Pat Toomey, Mitt Romney, Paul Ryan, Lindsey Graham, and Tom Freakin’ Cotton siding with McConnell’s camp. That last one was an interesting one, mostly in that I think that Cotton calculated after the phone call came out that Trump Republicans were a sinking ship and that he’s better off sticking with the establishment.

"This is far beyond anything that is just a political thing or worrying about the base or worrying about an election…We ask young people to give their lives to defend this country. We have to be willing to give our careers for the same thing." -@RepKinzinger pic.twitter.com/2Qget9lQpa